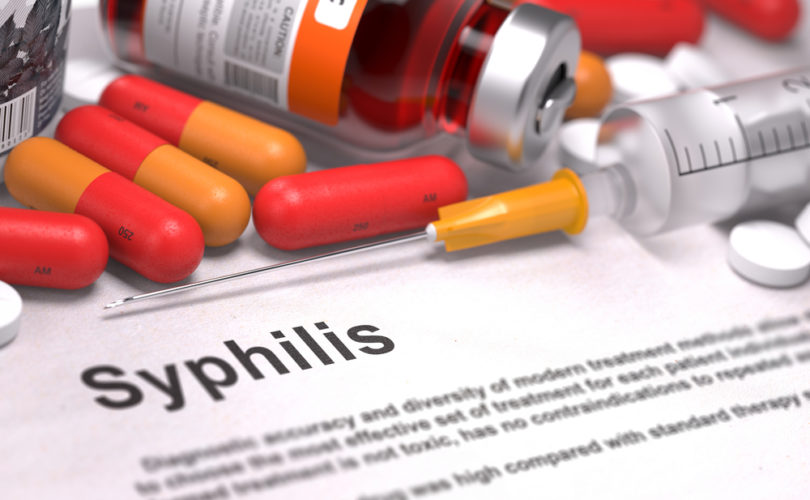 The recent report from the Centers for Disease Control (CDC) shows an 'alarming' rate of STDs among homosexuals.

WASHINGTON, D.C., November 23, 2015 (LifeSiteNews) – The recent report from the Centers for Disease Control (CDC) shows an “alarming” rate of STDs among homosexuals.

The government report admits, “While anyone can become infected with an STD, young people and gay and bisexual men are at greatest risk.”

In fact, syphilis infections among homosexual men have seen such a massive increase that the government report calls the gay syphilis statistics “troubling.”

“Men account for more than 90 percent of all primary and secondary syphilis cases,” the report states. “Men who have sex with men (MSM) account for 83 percent of male cases where the sex of the sex partner is known.”

The official government report explains that it uses the acronym MSM, “men who have sex with men,” because that phrase “indicates the behaviors that transmit infection.”

“It's time for policymakers and pundits to acknowledge and deal with the elephant in the room: engaging in homosexual behavior can be very dangerous to one's health,” Peter LaBarbera, founder of Americans For Truth About Homosexuality (AFTAH), told LifeSiteNews.

The CDC says fully half of MSM who have syphilis are also infected with HIV. If not treated, syphilis causes visual impairment and stroke and increases the chance of catching or transmitting HIV.

“If such overwhelming evidence pointed to any aberrant behavior other than homosexuality as so extremely high-risk, there would be a full-scale government-corporate mobilization urging people not to practice that behavior – or even leveling sanctions against it,” LaBarbera pointed out. “Yet homosexualism is celebrated, and promoted – even to young children.

“How tragic and ironic that politically correct politicians and cultural elites are aggressively promoting LGBT agendas, when it is the very living out of those immoral lifestyles that is linked to disease,” LaBarbera concluded.

Syphilis rates are concentrated primarily in the gay community, with homosexual men constituting nearly 83 percent of the syphilis cases reported in 2014.

“The fact that 83% of new male syphilis cases are found in the tiny segment of the population (probably less than 4% of all males), who are men who have sex with men, should be setting off major alarm bells,” Peter Sprigg, senior fellow for policy studies for the Family Research Council, told LifeSiteNews.

“Unfortunately, the mainstream media appears to be ignoring this finding, because they cannot figure out a way to spin it without reflecting negatively on homosexual conduct itself,” Sprigg commented.

Sprigg noted, “The sudden jump in syphilis rates in the last few years, however, demands an explanation. Mark Joseph Stern of Slate may have offered one with the theory that the effectiveness and increased use of PrEP medications for HIV may be having the unintended consequence of reducing condom use in this population, thus increasing their vulnerability to other STDs such as syphilis.”

“PrEP,” or “pre-exposure prophylaxis,” refers to the use before sex of antibiotics and other medications that make the transmission of HIV less likely.

Sprigg concluded, “The latest data only reinforce what pro-family groups have been saying for decades – the only 'safe sex' is sex that is saved for a monogamous, sexually exclusive lifelong marriage.”

The government explains the high rate of STDs among homosexuals by attributing it to “individual risk factors,” including “higher numbers of lifetime sex partners” and “higher prevalence of STDs.”