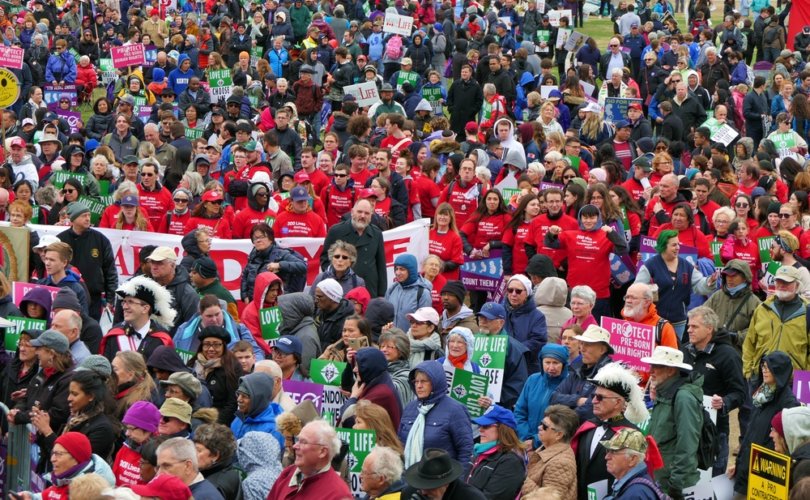 OTTAWA, June 11, 2020 (LifeSiteNews) — A national pro-abortion group that is calling on the Trudeau government to end Canada’s annual March for Life receives millions in tax dollars from that same government, a pro-life blogger has discovered.

“This year, COVID-19 has cancelled this in-person event, like many others. But what will it take to cancel the ‘March for Life’ for good?” questioned Action Canada for Sexual Health and Rights executive director Sandeep Prasad in an op-ed published in rabble.ca.

“Should a charity that receives millions of dollars in taxpayer funded grants be in the business of advocating for the repeal of Charter rights of pro-life organizations?” countered Patricia Maloney on her Run With Life blog.

That was echoed by Matthew Wojciechowski, vice president of Campaign Life Coalition, Canada’s national pro-life political lobbying group and organizer of the March for Life, the country’s largest annual pro-life event and typically the biggest annual rally on Parliament Hill.

“Action Canada used to be a collection of fringe groups whose bigoted ideologies were ignored by Canadians,” Wojciechowski told LifeSiteNews.

“Today, taxpayers should be absolutely outraged by the fact that Justin Trudeau is financially supporting this radical group with millions of dollars, giving them more influence in Canada and at the United Nations where they rub shoulders with other globalists and cultural Marxists on our expense.”

Prasad’s article was rife with warnings about the dangers of the March for Life, and of what he calls “Christian supremacy.”

March for Life events in Canada and the United States “share common goals, like ending access to abortion, that would result in taking away bodily autonomy and rolling back rights for many people in Canada,” he wrote.

Moreover, those who support the March for Life also “support conversion therapy and oppose same-sex marriage.” They also “oppose the right to die, and legislation that protects transgender people from discrimination” and “are some of the same groups that fought against Ontario's sex-ed curriculum,” he stated.

Prasad referred to the Texas-based Soulforce, “an LGBTQ+ non-profit organization that works to stop the ideological violence of Christian supremacy that is used to harm marginalized peoples,” to back up his point.

As Soulforce sees it, “Christian supremacy is tied into the idea that to be Christian means to be anti-choice, and that it is morally righteous to harass and discriminate against people for exercising their right to choose,” he explained.

This attempt to shut down pro-lifers and the attack on Christianity is not surprising to Wojciechowski.

“It’s quite common for abortion ideologues to try suppressing the voice of the pro-life movement in Canada. They see the March for Life as a threat and since they can’t deny what science says about the humanity of children in the womb, and the inalienable right to life that all human beings possess, they go after the religious beliefs of those who oppose abortion,” he told LifeSiteNews.

“Their attack on Christianity is laughable, as it is, in fact, Christian social teaching that inspires people to serve the poor, build hospitals and facilities that provide genuine healthcare, and offer humanitarian aid to millions of marginalized people worldwide,” Wojciechowski added.

“While they spend their time strategizing with their Marxist Antifa friends on how to take down traditional values, Christians are on the ground serving people, meeting them where they are at, and offering them support with their hands and from their pockets.”

A registered charity, Action Canada is earmarked to receive $14 million by 2024 from the Trudeau Liberals, Maloney found in a search of federal grants.

Action Canada has received or will receive:

The Trudeau government’s largesse to Action Canada underscores its commitment to a global “right to safe and accessible abortions,” which then-Global Affairs Minister Chrystia Freeland described in June 2017 as “at the core” of Canada’s foreign policy.

Not only do the Liberals fund pro-abortion groups, but they infamously have denied Canada Summer Job (CSJ) grants to pro-life organizations since introducing their controversial pro-abortion attestation in 2017.

Although the Trudeau government scrapped the attestation a year later after massive backlash, they still require employers to attest that CSJ grant money “will not be used to undermine or restrict the exercise of rights legally protected in Canada.”

Based on these rules, the federal government disqualified 400 of 40,000 applicants for summer job grants, with 26 of these denied because of “their approach to abortion, family planning, sex education or related issues,” Canadian Press reported last August.

Action Canada is also heavily involved in lobbying at the United Nations for global access to abortion.

Its UN abortion advocacy “is anchored by our role as the coordinating partner of the Sexual Rights Initiative (SRI),” an “explicitly feminist Global South-Global North coalition of five national and regional organizations,” and an office in Geneva.

CRA is not able to provide information on funds from outside of Canada. However, when Action Canada registered as a lobby group in January 2019, it reported receiving $108,760 from Denmark and $292,850 from the Netherlands in 2018.

Campaign Life’s Wojciechowski says the taxpayer bankrolling of Action Canada has to stop.

“The Trudeau government is using millions of Canadian tax dollars to fund an organization that in turn uses those funds to lobby that same government. Trudeau doesn’t need convincing on these issues. He’s the most pro-abortion prime minister in Canadian history,” he pointed out.

“This group should be completely defunded. Defund Action Canada for Sexual Health and Rights – has a nice ring to it. Perhaps we should start a hashtag and a campaign.”