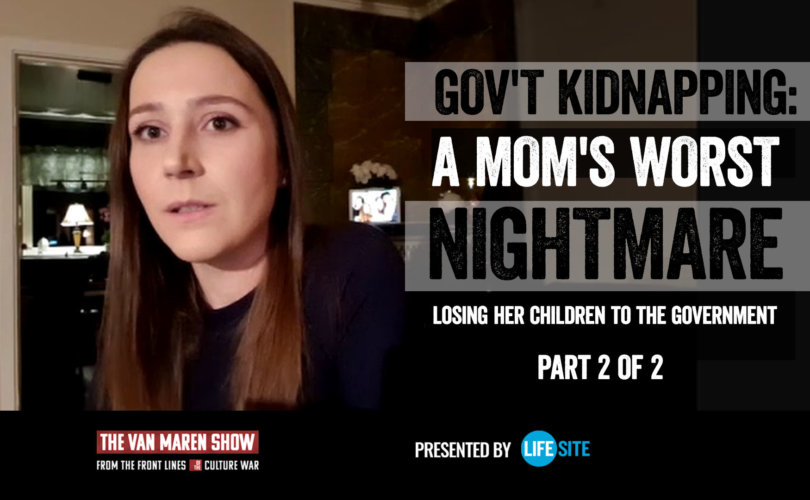 February 28, 2020 (LifeSiteNews) — When Natalya’s husband got a job in Norway and the family decided to move from Georgia to Norway, they never could have imagined that their children would be kidnapped by the Norwegian government. Despite being investigated and cleared of charges on multiple occasions, Natalya and her husband haven’t seen their kids in months.

Today, we’re taking a personal look at how Norway’s child welfare services are tearing apart families. In this episode of The Van Maren Show, the second part of our series on Norway, Natalya Shutakova joins Jonathon to speak about the nightmare she and her husband are experiencing having their three children removed.

One day, her daughter lied about not having lunch at school. When the school called Natalya, she asked the school to look in her daughter’s bag, where they found her lunch. The daughter admitted she had lied.

The following Monday, Natalya’s daughter was upset and sad and accused her parents of violence. She later admitted she lied, and a police investigation showed there was no violence toward any of the children.

Natalya shares the horrific story of the police pounding their door after the kids were already in bed. The police and child welfare services took the children and put Natalya and her husband in jail for 24 hours. The kids were put into a foster home that very night.

The police investigated Natalya and her husband for two months and determined there was no evidence of abuse. Despite being cleared, the court decided to keep their kids. The kids were split apart and moved to entirely different cities. They have been moved to four different families in four different cities in nine months.

Initially, Natalya and her husband were allowed to see their kids for two-hour supervised visits, but since December, they have been denied any contact with their kids. Natalya couldn’t even call her son on his birthday.

Natalya shares that she feels that child welfare services is telling her, “Forget about your past. They don’t belong to you anymore.”

“If you really cherish the family values, don’t go to [a] socialist country. I’ve managed to raise three beautiful, healthy children on my own, and I never needed anybody’s help. I had it all under control. And when you come here, they think, well, you need our help. You need to ask us for help. If you don’t, then our government is going to take over your kids. We know better how to treat your kids. We know better how to raise them and to erase all the Christian values that I put into my children’s little brains since birth.”

No one is immune. Natalya recounts the story of a family whose kids were taken from them while they were on vacation in Sweden.

Natalya and her husband are continuing to fight for their children, who were all born and raised in America. Natalya hopes that American officials will start to get involved and save her children. Through TikTok, her daughter has also called on all the presidents around the world to intervene so she and her siblings can go back home.

The Norwegian court has pushed off the date for the next hearing for Natalya and her husband from January until April 20. They only hope they don’t continue to come up with excuses and reasons not to restore their family.

Please sign this urgent petition calling on the U.S. government to intercede for Natalya’s family and the other American children who have been taken by the Norwegian government. We need to end this nightmare and reunite parents with their children.