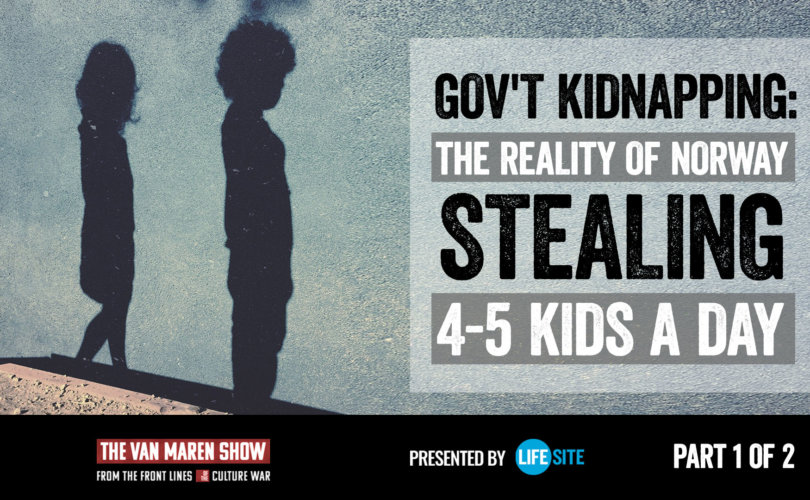 February 25, 2020 (LifeSiteNews) – Imagine living in constant fear of your child or children being taken from you, possibly never to be seen again. This is a reality for parents in Norway. Child removals have increased by 70% in the last few years with four to five children being removed from their homes every day.

Today, we’re taking an inside look into this issue affecting Norwegian families. In this episode of The Van Maren Show,
Björn Korf, an activist trying to fight these injustices, joins Jonathon Van Maren to discuss what is happening in Norway.

Korf is a Christian radio broadcaster who has become an activist for families who have lost their children to the Norwegian government. Korf tells listeners that he got involved when he heard the story of a Romanian-Norwegian family whose five children were taken from them by the government.

At first, Korf thought they must have done something for the government to take this action, but upon investigation he realized the kids were taken for singing Christian songs at school. Even the three-month-old infant, who was still breastfeeding, was taken from the parents.

The children were returned thanks to the international outcry by the Romanian Christian community, but Korf said most families aren’t so fortunate. In fact, many families never see their children again.

A big concern Van Maren raises is how the Norwegian child welfare services get away with taking children. Norway has been convicted five times of violating human rights by the European Court of Human Rights, the highest court in Europe.

Korf goes on to share the story of an American mother, Amy, whose baby boy was taken from her after she returned from a trip to the U.S. The police came to Amy’s home and demanded that Tyler, her son, be taken to the doctor. Tyler’s father and Amy agreed and took Tyler to a doctor 75 kilometers away from their home.

The doctor found that Tyler was slightly underweight for being 19 months old. He was 9.6 kilograms (21.2 lbs) and should have been 10 kilograms (22 lbs). The boy also had a slight B12 deficiency. These reasons were enough for child welfare services to take Tyler from his parents.

Tyler was taken in 2013 and Amy hasn’t seen him since 2014. Child welfare services has changed Tyler’s name at least twice so that Tyler’s parents can’t find him. The boy has spent some of the most formative years of his life without his parents, jumping from foster home to foster home.

Amy has missed her son’s entire childhood. While Amy and her son are both American citizens, the U.S. embassy has been no help in getting Tyler returned to his family. Her last chance of recourse is to go to the European Court of Human Rights and hope they will return her son. Currently, the court has over 30 cases pending just like Tyler’s.

Listen to the whole interview:

Korf shares other stories of children who are ripped from their parents for truly no reason. He says that the government can use the reason like a spiderweb in the corner to claim a mother must not be fit to raise her children.

Korf has teamed up with others to start Step Up 4 Children’s Rights to raise awareness about this human rights injustice happening in Norway and other Scandanavian countries. You can learn more here.

Stay tuned for part 2 of this episode to hear from a mother who is suffering through the nightmare of not seeing her three children after the Norwegian government took them over a year ago.