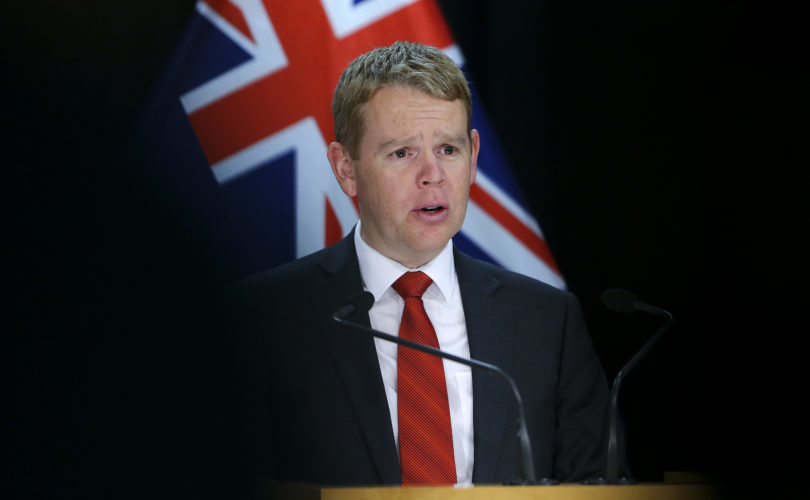 July 9, 2021 (LifeSiteNews) — In an interview in which he confirmed that a “handful” of “severe” adverse reactions to the experimental Pfizer jab had been reported, New Zealand’s COVID-19 Response Minister suggested that his government would need to “go out and find” any Kiwis who were still unvaccinated next year.

Hon. Chris Hipkins, a member of parliament in New Zealand’s House of Representatives and the country’s minister for COVID-19 response, told The AM Show Tuesday that the injections were currently being rolled out to those in the over-65 age category and affirmed that some New Zealanders had experienced severe reactions to the shot.

“Yes there have been a few people who have experienced side effects and that is not unusual for this vaccine, that applies with almost every vaccine that does get rolled out,” he said.

A recently published Medsafe study confirmed 4,521 reports of adverse reactions among New Zealanders after taking the Pfizer injection, of which 180 were serious. Eight deaths were reported, though it is unclear whether they were directly caused by the Pfizer shot.

Hipkins said that the shots would be available to younger and less-vulnerable age categories moving forward, and that everyone will have the chance to get the Pfizer product.

“Early next year we’ll be in the phase of chasing up people who haven’t come forward to get their vaccination or who have missed their bookings and so on,” Hipkins said. “So, everyone will be able to get a vaccine between now and the end of the year.”

— Article continues below Petition —
PETITION: No to mandatory vaccination for the coronavirus
Show Petition Text
1075485 have signed the petition.
Let's get to 1100000!
Thank you for signing this petition!
Add your signature:
Show Petition Text

“Of course, I want every New Zealander to come forward,” Hipkins continued, “but human behavior suggests that there will be some people that we have to actually really go out and look for.”

Hipkins said the government is committed to making the drugs available to everyone by the end of 2021, but added “I can’t say that we’re not going to have some hesitant people, or some people who just haven’t come forward that we don’t have to go out and find next year.”

Simulations conducted in New Zealand have suggested that 83 percent of the population would need to be vaccinated to gain herd immunity against the “original strain” of the coronavirus. But experts now claim that the allegedly more infectious “Delta variant” will require a vaccination rate of 97 percent.

Hipkins’ comments about “go[ing] out and look[ing] for” unvaccinated New Zealanders have raised eyebrows among those skeptical of the hastily produced experimental shots and the politicization of vaccination by government officials.

The New Zealand minister’s remarks were made within hours of U.S. President Joe Biden’s announcement that he was launching a “community by community, neighborhood by neighborhood, and oftentimes door by door” campaign, “literally knocking on doors to get help to the remaining people.”

The comments by the Biden administration sparked immediate backlash among social media users and Republican lawmakers, who slammed the policy for infringing on Americans’ privacy.

A Florida legislator called the practice “sick,” suggesting he would introduce legislation to ban door-to-door solicitation of the medical products.

Meanwhile in Arizona, Attorney General Mark Brnovich wrote a letter to President Biden expressing concern that the White House “might be in possession of medical records revealing the contact information of Americans who have not been vaccinated.”

Brnovich said if the White House did indeed have such information, it would amount to “a severe breach of privacy” which he “will not tolerate” in his state.

In an interview on MSNBC Wednesday, Dr. Anthony Fauci, who has repeatedly flip-flopped on his COVID-19 advice and admitted to skewing numbers related to herd immunity based on polling data, told Americans who don’t want to take the experimental drug to “get over it.”

“You’ve gotta ask: What is the problem?” Fauci said. “Get over it. Get over this political statement. Just get over it and try and save the lives of yourself and your family.”

Fauci repeated a claim he has made before, saying that varying vaccination rates in different U.S. regions might lead to “two Americas.”

“So, what we will have, because certain sections are not going to want to get vaccinated, is this smoldering threat that’s always there,” Fauci claimed.

“If we keep allowing the virus to circulate, wherever it is, whatever red states or whatever states are not the ones that are getting vaccinated, then you have the threat of the entire system getting in trouble because you have a new variant,” Fauci said.

According to the Centers for Disease Control and Prevention (CDC), over 67 percent of Americans over the age of 18 have received at least one shot, with more than 157 million “fully vaccinated.”

However, a Washington Post-ABC News poll published last week suggested that almost three in 10 Americans (29 percent) will likely choose not to get vaccinated, including 20 percent who said they definitely will not get the shot.