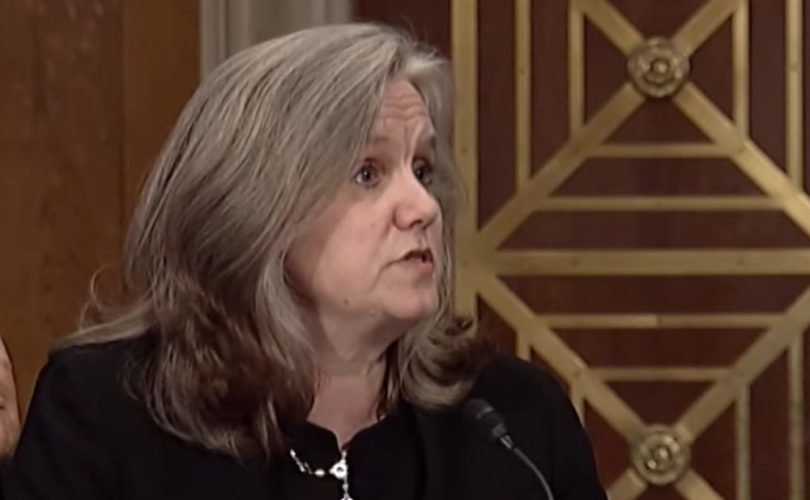 WASHINGTON, D.C, April 14, 2021 (LifeSiteNews) – An employment law attorney who was appointed as the first female General Counsel to the U.S. Equal Employment Opportunity Commission (EEOC) in 2019 by then-President Donald Trump has been fired at “the direction of President Biden” after writing a report on religious discrimination in the workplace.

Sharon Fast Gustafson was asked by Deputy Assistant to the President Gautam Raghavan, who claimed to be acting at “the direction of President Biden,” to voluntarily resign her position at the White House by the end of the same week, just three days later.

Gustafson “respectfully” declined the invitation to resign in a three-page response to the president on March 5, wherein she acknowledged that she had served only about half of her appointed four-year term due to end in August 2023.

“At the time I was nominated, I was asked if I would commit to do my best to fulfil my four-year term, and I answered yes,” she wrote in the letter. “Unless prevented from doing so, I intend to honor that commitment.”

Within a few hours of sending her letter to the president, Raghavan responded in a curtly worded email, informing Gustafson that her “employment as General Counsel of the EEOC is terminated,” effective end-of-day that day.

Gustafson noted that her removal was unprecedented, describing the decision as motivated by partisanship: “So far as I know, no previous General Counsel has been fired for being appointed by the wrong political party.” She later told CBN News that she “was given no reason at all for the termination,” but speculated that it involved her unabashed support for religious liberty.

The EEOC was established in 1964 and is responsible “for enforcing federal laws that make it illegal to discriminate against a job applicant or an employee because of the person’s race, color, religion, sex (including pregnancy, transgender status, and sexual orientation), national origin, age (40 or older), disability or genetic information,” according to the agency’s website.

Despite reportedly covering religious discrimination in the workplace, Gustafson noticed that no cases had ever been brought before the commission “to protect somebody who was discriminated against because they had traditional religious beliefs about sexual morality.” Accordingly, she established a “Religious Discrimination Work Group” that investigated the extent to which the EEOC is understood to protect religious freedoms by members of numerous religious bodies.

The group subsequently published a report and accompanying press release on the EEOC’s website on January 13, 2021, Gustafson said. The report detailed that “some participants shared that their members do not view the EEOC as friendly to their religious beliefs.”

Gustafson noted that both the report and press release were removed “shortly after” Biden’s inauguration.

Furthermore, Gustafson related that, in addition to the Work Group’s report being removed, an eight-minute podcast on the group’s findings published February was removed “days later.” She therefore accused Biden of firing her for her stance on religious freedom, suggesting that her “resignation would be followed by similar suppression of [the EEOC’s] work promoting religious freedom.”

Given Gustafson’s suspicion of partisanship in her termination, she proposed that there will be a concomitant “chilling effect to other people at the EEOC,” insofar as “the word gets out, you know, to the public generally that the EEOC is not interested in these types, certain types of religious discrimination claims, and that is to everybody’s loss.”

Andrea Lucas, a Republican-appointed commissioner to the EEOC, excoriated her colleague’s dismissal, calling the action “deeply troubling, a break from long-established norms respected by presidents of both parties, an injection of partisanship where it had been absent, and telling evidence of what ‘unity’ actually means to this President and his Administration.”

Republican lawmaker Virginia Foxx, in a press release on the day of Gustafson’s termination, described her dismissal as the “unprecedented firing of an honorable public official.”

“This is a pattern. President Biden calls for the end to ‘partisan warfare,’ only to turn around and demand that Senate-confirmed officials resign so he can make room for his left-wing friends,” she argued, adding that “President Biden should take a note from General Counsel Gustafson, who stuck to her commitment and refused to cave to partisan pressure.”

Gustafson’s short tenure was not received favorably by pro-homosexual and pro-transgender advocates within the EEOC’s ranks.

She faced backlash last year after taking on retail giant Kroger for firing two employees who refused to wear uniforms in support of homosexual and transgender issues. Gustafson said that the women “simply said that because of their religious beliefs they could not celebrate this and so they asked to be permitted to wear aprons that did not include that symbol [the rainbow flag],” which resulted in disciplinary action for the women and their eventual dismissal by the grocery firm.

She explained that “Title 7 [of the Civil Rights Act] doesn’t permit people to require that no one disagrees with them,” adding “[we] all have to sometimes work with people who may not approve of our beliefs.”

“They may not approve of our actions but as Americans, we still have an obligation, a duty to work shoulder to shoulder with each other and to do it in a non-discriminatory, non-harassing way,” she said.