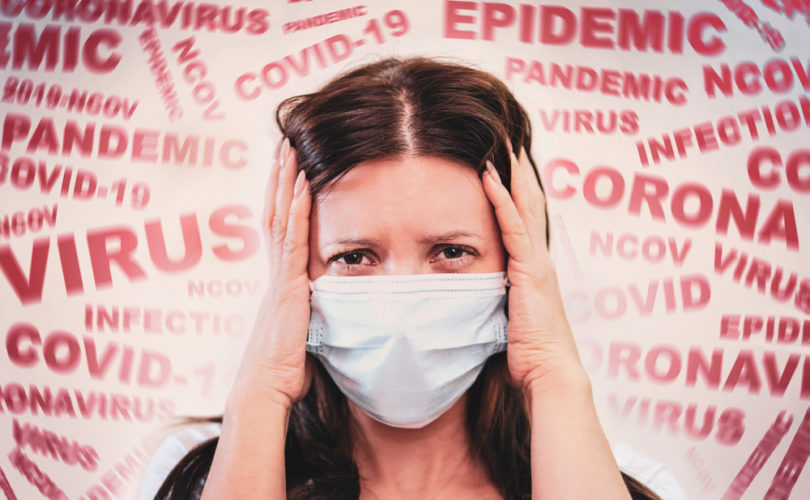 April 22, 2021 (LifeSiteNews) — A former member of the Canadian military who worked in emergency management blasted provincial governments across the country for using “fear” as a tool to keep the COVID lockdown narrative going, saying that people should never be deliberately scared.

“Fear here is a very powerful tool and should never have been used, it’s never to be used in emergency,” said the former head of Alberta Emergency Management, Lt. Colonel David Redman, during an online seminar hosted by The Canada Strong and Free Network on April 21.

“I’ll give you one short anecdote. I was a colonel in the middle of a war zone with a battalion. If every morning I walked out in front of my troops and said, ‘I think we’re going to be overwhelmed, I don’t think we can handle the enemy, I really think they’re going to kill us all today,’ or I walked out of my hut every morning to look at the troops saying, ‘We got this let’s go,’ what do you think the two reactions are from my soldiers?” asked Redman.

Over the past few months, Redman has come out against COVID lockdowns and the strategies of the Alberta government. He said that his anecdote describes “exactly” what has happened among the Canadian general public since the COVID crisis began.

“And since March last year they’ve heard nothing but ‘our hospital systems are going to fail, you’re all gonna die.’ We need to change that narrative of fear.”

Strauss works as an intensive care doctor, and during the seminar said that ICUs have always been “full” — not just since COVID-19.

“Hospitals have been full every year that I have been a physician, and I started medical school in 2004 … I don’t see any clear evidence that lockdowns will prevent ICUs from being overwhelmed. We cannot reward the healthcare mis-managers who have left our ICU and hospital system to be bedraggled the way it is, we can’t reward their incompetence with the power to suspend our human rights,” said Strauss.

“COVID is real, but is tied to age … If you are under 35, you are more likely to die in a car accident. Under 50 from any accident … our total ICU capacity … has not gone up appreciably over this whole year.”

Strauss noted that while he has seen and treated many COVID patients, the reality is people should be allowed to assess their own level of “risk” in going about their lives.

“We have to take personal risk … the government can’t tell you what the meaning of … your life is,” said Strauss. “It should be up to individuals.”

He said he has witnessed collateral damage caused by lockdowns, noting he has “personally, admitted patients to hospital who were starved to death” because they were not being properly cared for.

He also said speaking out against COVID lockdowns has resulted in many complaints leveled against him, but that to date no harm has come to him, as he backs up his claims with peer-reviewed studies.

“There clearly has been a chill factor, folks complain about things I say,” said Strauss.

“I don’t want to be seen as an outlier in this discussion but as far as I’m concerned vaccines are a red herring,” said Redman. “I say that as I’m an ex-soldier, I’ve been vaccinated all over. I’m a strong believer in vaccines, I’ve already had my first Pfizer, but the reason I called them a red herring is they’re now being used as the club to say we can’t reopen until everyone’s vaccinated. That’s absolutely wrong, it was wrong and we should never have chased the vaccine trail since last March.”

When asked about COVID jabs and concerns over their safety, which have been raised by many, Strauss argued the real issue is patient consent.

“I support folks who have a lot of questions getting those questions answered, and I’m very much against vaccine passports and infringing on their consent. I don’t think you should take it until you agree to take it,” said Strauss. “The thing going forward is to be bold. No one can come after you for speaking about consent … If I don’t get [a patient’s] consent, I am violating their human rights and individual consent.”

Poilievre said that people should be bold and not afraid to “speak up” when it comes to voicing their opinion about COVID lockdowns. He also said there needs to be a plan to permanently reopen the economy.

“You know it’s being done all around the world … we’re being left behind as the rest of the world reopens safely and restarts its lives,” said Poilievre. “Here in Canada, we’re talking about some of the most severe restrictions anywhere on the planet earth, and then, furthermore, we have … the government come down on anyone who questions those ideas, [being] dismissed as a conspiracy theorist or a disseminator of misinformation.”

Poilievre, in turn, blasted the Candian federal government under Prime Minister Justin Trudeau for being disseminators of “significant misinformation.”

“Let’s start with the fact that our own government disseminated significant misinformation from the very beginning when Trudeau told the house, and so did his health minister, that COVID was absolutely no threat to Canada,” said Poilievre.

“And then when we told him to close the borders, he left them open for three months after. He’d been briefed by the military of the brewing pandemic in China and then they said masks don’t work, don’t use masks. Now they say we must wear masks. So, we should all be afraid at any time when the government tells you that it is going to stop the spread of information it does not like. We should be especially afraid when that same government has been misinforming its public systematically about the matter in hand for over a year.”

Redman concluded the online seminar by talking about how the mainstream media has been a tool in controlling the COVID narrative to keep “lockdowns” going, and urged everyone to call their local MP and provincial politicians to demand the reopening of the Canadian economy.

“We know for a fact that people who speak a different narrative are being censored … It leaves me baffled why mainstream media won’t allow an alternative narrative,” said Redman. “Those who believe what we’re saying need equal time to give perspective in mainstream media we also need all our citizens to call their MLA, their MPP, and to do it every day … the response to a pandemic is a provincial responsibility. They run the healthcare system, so until the premiers remove the lockdown mentality, it’s going to stay [in place] in every province and territory in Canada, so we need you the public and all the people that think like you to call your MLAs, MPPs.”

The Canada Strong and Free Network is a conservative Canadian think tank focused on limiting government and protecting free speech. It was originally founded in 2005 by former Reform Party/Conservative Party MP Preston Manning as the Manning Centre for Building Democracy.

Just recently, despite the fact many states in the U.S. have opened up, the provincial government of Ontario under Premier Doug Ford extended a stay-at-home order, placed a 10-person limit on church services, closed playgrounds, implemented provincial border checks, and gave police the power to stop anyone for any reason, if they were outside their home without cause.

After a public backlash, however, the Ford government walked back some of its coronavirus rules less than a day later. Playgrounds were allowed to stay open, and police must now have “reason to suspect that you are participating in an organized public event or social gathering” in order to question people.

The backtracking of some of the rules came about after dozens of local police forces in Ontario, in multiple statements, said they would not be conducting random stops and searches of people.