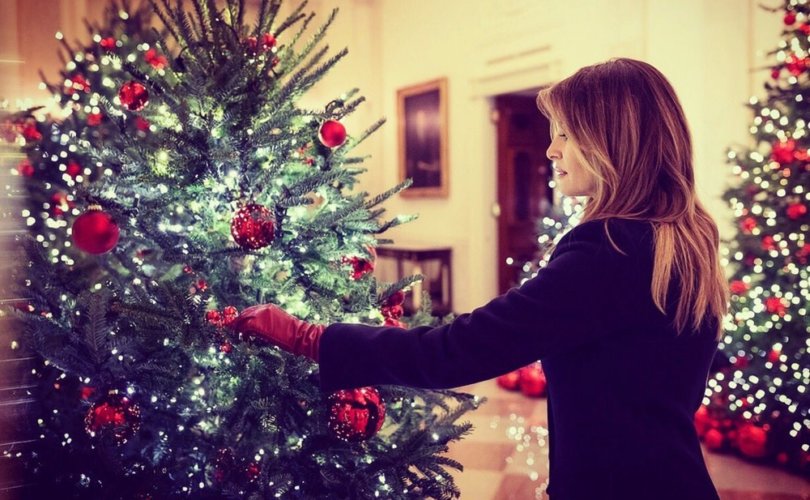 LYNCHBURG, Virginia, November 29, 2018 (LifeSiteNews) ― The First Lady of the United States laughed off criticism of her Christmas decorations while bringing attention to the nation’s opioid crisis.

As have all First Ladies since Jacqueline Bouvier Kennedy began the custom, Melania Trump decorated the public rooms of the White House for the Christmas season. Last year, Melania chose a snowy palette for her “Time-Honored Traditions” theme. This year, for the “American Treasures” theme, she opted for a patriotic red, white, and blue, with an emphasis on her “Be Best” program.

“Crossing in to the Grand Foyer and Cross Hall, patriotism, the heart of America, takes center stage with more than 14,000 red ornaments hanging from 29 trees,” according to the White House. “The choice of red is an extension of the pales, or stripes, found in the presidential seal designed by our Founding Fathers.  It’s a symbol of valor and bravery.”

Ever-ready to attack the thick-skinned Trump through his wife, critics have mocked Melania’s decorations, claimed to find them sinister, and via Photoshop dressed up the crimson berry-covered trees in the East Colonnade as car-wash brushes, Margaret Atwood’s dystopic “handmaids,” or yip-yipping “Martians” from Sesame Street.

The First Lady herself shrugged off the jokes yesterday, saying that tastes differ.

“We are in the 21st century and everybody has a different taste,” Melania said during a “town hall” discussion at Liberty University. “I think they look fantastic.”

She invited everyone to come to the White House over the Christmas season to see the decorations up close.

“I hope everybody will come over and visit it,” she said. “In real life, they look even more beautiful. And you’re all very welcome to visit the White House, the people’s house.”

Mrs. Trump was speaking at a Liberty University “town hall” about the opioid addiction epidemic. Her “Be Best” program seeks, in part, to combat it.

“When I took on opioid abuse as one of the pillars of my initiative ‘Be Best,’ I did it with the goal of helping children of all ages,” she said.

“We must commit to remove the stigma of shame that comes with addiction.”