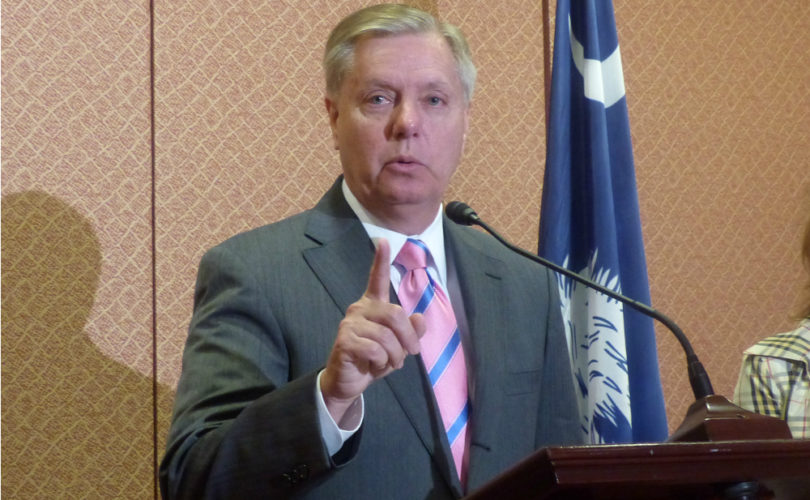 WASHINGTON, D.C., June 11, 2015 (LifeSiteNews) — Sen. Lindsey Graham, who recently announced a bid for the 2016 Republican presidential nomination, told reporters that “over time we will win,” just hours after introducing a ban on most abortions after 20-week bans.

On Thursday, the South Carolina senator introduced the Pain Capable Unborn Child Protection Act in the U.S. Senate. The bill, which was also introduced by the GOP presidential candidate in 2013, passed the House in May with a bipartisan margin of 242-184.

While the bill is unlikely to get 60 votes in the Senate, Graham and other pro-life leaders were unbowed in their support for the measure.

“Here's the legal theory,” Graham said at a press conference on Capitol Hill. “Roe v. Wade was about fetal viability. Roe v. Wade acknowledges that there is a compelling state interest in protecting the unborn child at the point of medical viability.”

“The standard of medical practice today in America is that if you operate on an unborn child at 20 weeks…you have to provide anesthesia to the baby,” said Graham. “If a doctor is required to provide anesthesia to a child to help save his life because they feel pain in the process of being operated on, is it okay for society to say, 'Well, at that stage in the pregnancy, we don't want the operation to be an abortion'? I believe most Americans will say yes.”

Graham's introduction of the pain-capable ban follows several months of acrimonious discussion and debate in the House of Representatives over a previous requirement for raped women to report the alleged crime to police. A number of Republican women, however, claimed the exception was too narrow, and derailed an original vote on the House's bill in January.

Graham's comments were followed by others from prominent pro-life groups in Washington. “Abortion is not just about ending the life of a baby,” said Tony Perkins of the Family Research Council. Perkins expressed concern for the well-being of mothers who go to abortion clinics, citing former late-term abortionist Kermit Gosnell, who is serving three life sentences for murdering unborn children. At least two women died in Gosnell's House of Horrors, including one a jury found he was responsible for.

Perkins also quoted President Obama, who supports abortion-on-demand at any time in a pregnancy, and has threatened to veto the 20-week ban. Earlier this week, said Perkins, Obama spoke of “a shared belief that every human being made in the image of God deserves to live in dignity. That all children, no matter who they are, or where they come from, or how much money they were born into, ought to have the opportunity to achieve their God-given potential.”

Obama was speaking of the Affordable Care Act, which funds elective abortions through a mandate that was found partially unconstitutional by the U.S. Supreme Court. But according to Perkins, “that potential, that opportunity, it begins with life.” Perkins called upon Obama to “pledge his support for this measure that would help bring this administration's policies in line with his rhetoric.”

Americans United for Life's Charmaine Yoest did not mince words in her comments, saying there is hypocrisy in the health care industry. “How long will we as Americans stand to say, 'In this wing of the hospital over here, we'll operate to save a five-month unborn baby, and give them anesthesia while we do it — and then look the other way where, right in another wing, we're destroying a baby at exactly the same age'?”

“How long will we continue to look the other way? How long?” asked Yoest, noting that at five months' gestation, “you are 35 times more likely to die as a woman inside of an abortion clinic than you were in the first term.”

The conference's last speaker was Concerned Women for America's Penny Nance, who opened her comments by talking about how America has changed since Roe v. Wade 42 years ago and accused late-term abortion supporters of being akin to “flat-earthers.”

Asked by LifeSiteNews whether his bill can withstand constitutional challenges in light of courts overturning state-based 20-week bans, Graham said, “Absolutely. I think science is on our side, and I think law will be on our side. I welcome the debate. The only way you can have a hearing at the highest level of the land is to get this bill through the Congress, and I really do believe, yes, that…there is compelling state interest available for legislative bodies to protect children who can feel pain at five months.”

State-based bans are being overturned because judges are saying the bans violated the Supreme Court's Roe v. Wade, which said that bans can only happen after fetal viability.

Moments after Graham answered LifeSiteNews' question, he told Washington Examiner reporter Paige Winfield Cunningham that “we are not using the theory of medical viability to advance the cause here.”

“We're saying there is a compelling state interest to protect an unborn child who can feel pain,” he said.

Susan B. Anthony List president Marjorie Dannenfelser, who moderated the press conference, told LifeSiteNews that “almost every demographic, except the pure, self-defined, left-wing Democrat, embraces [a ban on late-term abortions]. Strong majorities, from The Washington Post, Quinnipiac — say that women even more than men embrace this piece of legislation.”