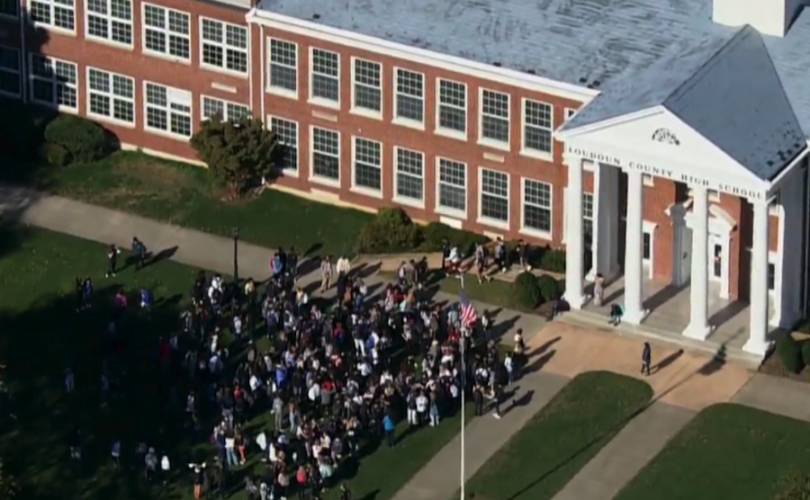 (LifeSiteNews) — A special grand jury formed to investigate the alleged cover-up of the bathroom rape of a Virginia schoolgirl published its full report earlier this week. Although the report found officials within the school district to have “failed at every juncture,” it does not support evidence of criminal action on their part.

In May 2021, a ninth-grade girl at Stone Bridge High School in Loudoun County, Virginia was raped in a bathroom stall by a male classmate wearing a skirt. The incident was under-reported by the media until the following October, when the same male student assaulted a different girl at the school to which he had been transferred after the first rape. The first assault occurred after Loudoun County Public Schools (LCPS) adopted a “transgender” bathroom policy, which allowed students to access any bathroom or locker room which corresponded to their “gender identity.”

“We believe that throughout this ordeal LCPS administrators were looking out for their own interests instead of the best interests of LCPS,” the report states. “This invariably led to a stunning lack of openness, transparency, and accountability both to the public and the special grand jury. There were several decision points for senior LCPS administrators, up to and including the superintendent, to be transparent and step in and alter the sequence of events leading up to the October 6, 2021 BRHS [Broad Run High School] sexual assault. They failed at every juncture.”

While the grand jury determined that “there was not a coordinated cover-up between LCPS administrators and members of the LCSB [Loudoun County School Board],” they concluded that the LCSB was “deliberately deprived of information” about the situation until the second assault occurred. They also emphasized that “a remarkable lack of curiosity and adherence to operating in silos by LCPS administrators is ultimately to blame for the October 6 incident.”

— Article continues below Petition —
Stand with Christian daycare worker fired for refusing to indoctrinate kids with LGBT agenda
Show Petition Text
7984 have signed the petition.
Let's get to 9000!
Thank you for signing this petition!
Add your signature:
Show Petition Text

The lengthy report outlines multiple ways in which LCPS failed to take necessary actions to protect its students, as well as pointing out that “a breakdown of communication” between the Loudoun County Sheriff’s Office, the Court Services Unit, and the Loudoun County Commonwealth’s Attorney’s Office contributed to the “tragic events that occurred.”

Following the bathroom rape in May, the assailant was “missing and at-large” for roughly three hours. During this time, the victim’s father “became very loud” when he was prevented from entering the school. The father was eventually removed from school grounds, and the principal requested a “no trespass letter” from the superintendent. Later that afternoon, the superintendent sent a message to the school board informing them of both the rape and the father’s complaints. However, in a notice to the public—to which a public information officer and the superintendent contributed—the principal “deliberately makes no mention of the sexual assault that took place just hours earlier. Nor does it mention the fact the assailant had gone missing in SBHS [Stone Bridge High School] for hours.”

During a school board meeting a month later, a member of the LCSB asked the superintendent if “assaults in our bathrooms or in our locker rooms” was a regular occurrence, to which the superintendent answered, “to my knowledge we don’t have any record of assaults occurring in our restrooms.” Both the SBHS principal and another witness later “testified the superintendent’s statement was a ‘bald-faced lie’.”

The report notes that most school officials and the majority of the public were unaware of the initial rape incident and that the October assault was committed by the same student until the Daily Wire published an article outlining the connection. Although the article’s author, Luke Rosiak, contacted the LCPS public information officer with a notice of his story and offering an opportunity to correct any false information, nobody responded to his email.

This article, combined with the October 7 announcement from the local police that the assailant had been arrested, sparked “community outrage.” According to the report, “national outrage focused on Loudoun County because the student was labeled as gender fluid, LCPS had recently passed a transgender policy to conform with the Virginia Department of Education’s model policy, and an article linking all of these facts was published just weeks before the highest-profile election in the country at the time, the Virginia gubernational contest.”

Under the leadership of Democrat Gov. Ralph Northam, Virginia public schools faced radical model policies in 2021 from the state’s Department of Education (VDOE) which promoted the LGBT and “transgender” ideology. School staff and students were instructed to “affirm” a person’s so-called “gender identity” with nothing more than a piece of paper detailing the request. They are also encouraged to hide this information from parents.

The policies were updated in September to require adherence to students’ biological sex and returned basic rights for parents to participate in their children’s education, a fulfillment of a promise made by Republican Gov. Glenn Youngkin, who took office in January 2022.

On January 15, Youngkin signed an executive order authorizing the state’s Republican attorney general Jason Miyares to investigate LCPS and LCSB, which in turn led to the delegation of the grand jury in April. Prior to the investigation, the 15-year-old boy who assaulted his female classmates was sentenced to probation at a residential treatment facility, which will last until he turns 18 and returns to court. The judge also added the boy’s name to the sex offender registry, where it will remain for the rest of his life.

As noted by the Daily Wire, the grand jury requested by Miyares has not been dismissed, which could result in criminal charges in the future.