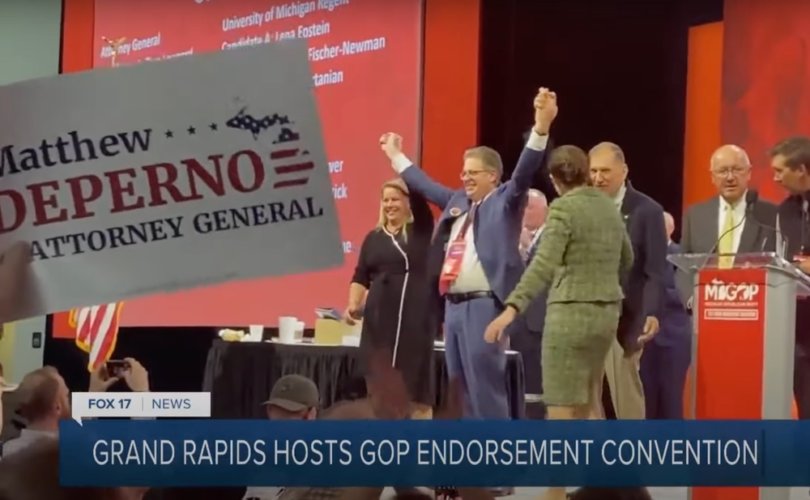 GRAND RAPIDS, Michigan (LifeSiteNews) — Two Trump-backed Republican candidates in Michigan have beaten out establishment picks to earn the nomination of the Michigan GOP, giving a hint as to the direction of the Republican Party ahead of the 2022 midterm elections.

Kalamazoo attorney Matthew DePerno and Oak Park educator Kristina Karamo were given the nod by Michigan Republican Party delegates during the endorsement convention Saturday, becoming the Republican contenders for attorney general and secretary of state, respectively.

Both candidates have been endorsed by Trump. https://t.co/LfL62fSGF4

“We’ve got a great slate of candidates,” Michigan Republican Party chairman Ron Weiser said while standing on stage with Karamo and DePerno on Saturday.

Both DePerno and Karamo had earned the backing of Donald Trump, leading political analysts to recognize that Trump’s endorsement continues to carry strong political cachet within the Republican Party as the country heads into the 2022 midterm elections.

Bill Jaglowski, a precinct delegate in Reynolds Township in Montcalm County, Michigan, attended the convention on Saturday. He told LifeSiteNews during a phone interview Monday “you could see the divide between the establishment GOP and a lot of the America First people.”

“That’s the direction of the party, I think,” Jaglowski said. “You could see all the enthusiasm for the Trump-backed candidates.”

DePerno and Karamo found favor with Michigan Republicans and the former president after voicing conservative values and raising concerns about the legitimacy and accuracy of the 2020 election.

Last year, DePerno raised the alarm after tabulation “errors” in Michigan’s Antrim County originally led to incorrect results for that county in the 2020 election — Antrim County was first reported as having gone to Joe Biden but later was correctly updated to reflect a Trump victory.

LifeSiteNews reported last summer that, according to DePerno, new evidence had emerged that suggested the voting machines in Antrim County were remotely accessed in order to perpetrate fraud.

DePerno’s work to expose voter fraud earned the notice of Trump, who held a rally for him earlier this year, MLive reported.

“He is really tough. And that’s just what you need,” Trump said. “He is a killer. We need a killer. And he’s a killer in honesty. He’s an honest, hard-working guy who is feared up here.”

Asked by a reporter Saturday as he was leaving the convention, DePerno said that he believes “election integrity” will be a winning issue in the general election, since it’s “an important issue,” and “many people care about it.”

For her part, Karamo has also “come out very vocally” to argue that the 2020 “election was stolen,” despite being “attacked” by local media, Jaglowski told LifeSite.

Karamo, a public speaking teacher at a community college, has claimed to be a witness to voting irregularities as she worked as a poll watcher in November 2020, becoming a well-known name in conservative media.

“She spoke out,” Jagloswki said, describing the 36-year-old candidate for secretary of state as “a strong Christian.”

DePerno and Karamo will have to be confirmed during the next convention this summer before going into the general election in November, but their nomination as Republican contenders could only be reversed with a 75% majority vote, Jaglowski said. That means the Saturday endorsements are “pretty much a lock.”

For Jaglowski, the advancement of the two Trump-backed candidates in Michigan is cause for hope as the midterms approach.

“We’re very excited, we’re very hopeful that we can turn this around,” he said, noting that “we’ve got some good governor candidates too.”

Jaglowski stressed that it’s important for citizens to “jump in” to become precinct delegates and poll watchers, doing what they can to advance the best policies and ensure election integrity.

Weighing in on the likely outcome of the 2022 midterm elections nationwide, Jaglowski said, “if all the votes are counted, it’ll be a big Republican victory.”