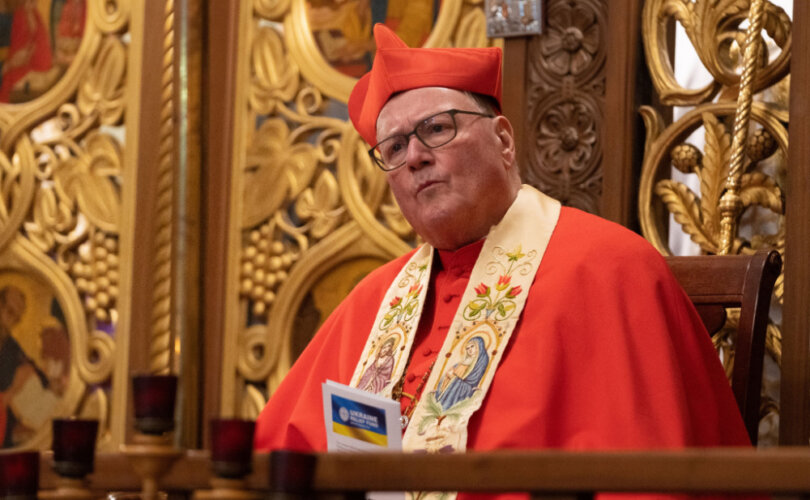 WASHINGTON, D.C. (LifeSiteNews) — Top ranking bishops of the U.S. Conference of Catholic Bishops (USCCB) have issued a statement following the Senate’s passage of the Respect for Marriage Act (RMA) on November 29 that would codify homosexual “marriage” into federal law.

On December 1, the Bishops’ Conference lamented the Senate’s passage of the bill, which “will codify the nationwide redefinition of marriage to include same-sex couples in federal statute for the first time,” and which they noted will “heighten the threats to religious liberty that have persisted after the Supreme Court’s Obergefell decision of 2015.”

On behalf of the USCCB, Bishop Robert Barron of Winona-Rochester, Chairman of the Committee on Laity, Marriage, Family Life, and Youth, stated, “We are gravely disappointed that the misnamed Respect for Marriage Act passed the Senate and continue to call for its rejection.”

On November 23, Cardinal Timothy Dolan, Archbishop of New York and Chairman of the USCCB Committee for Religious Liberty, together with Bishop Barron, had penned a letter to the Members of Congress, condemning the Respect For Marriage Act for undermining marriage as the foundation of society while violating religious liberty. The bishops called on legislators to reject the bill.

“The Respect for Marriage Act’s rejection of timeless truths about marriage is evident on its face and in its purpose,” Dolan and Barron declared. “It would also betray our country’s commitment to the fundamental right of religious liberty, as detailed in the explanation appended to this letter and in previous communications.”

Detailing the supposed “protections” that lawmakers boasted would keep the bill from being used to infringe upon religious liberty, the bishops wrote, “The provisions of the Act that relate to religious liberty are insufficient. If passed, the amended Act will put the ministries of the Catholic Church, people of faith, and other Americans who uphold a traditional meaning of marriage at greater risk of government discrimination. This bill is needless and harmful and must be voted down.”

The bishops offered several arguments for the insufficiency of any alleged religious liberty “protections.”

“First,” they said, “the bill will be used to argue that the government has a compelling interest in forcing religious organizations and individuals to treat same-sex civil marriages as valid… This reasoning would have a ripple effect that hurts religious freedom in every context where conflicts with same-sex marriage arise, not just in the context of compliance with RMA itself. Employment decisions, employees’ spousal benefits, eligibility for grants or contracts, accreditation, tax exemptions – it runs the full gamut, even in religious liberty conflicts arising out of state or local laws.”

“Second, the bill constitutes a declaration by Congress of a national policy of recognizing legally performed same-sex marriages. It will lead federal agencies to adopt that policy as their own.”

“Last, as illustrated in examples above, conflicts between religious liberty and same-sex marriage arise in all sorts of contexts – indeed, predominantly – outside of the actual solemnization or celebration of a marriage.”

“Given all this,” the bishops concluded, “that the bill establishes an affirmative, enforceable, comprehensive right to federal and interstate recognition of same-sex marriages, but sets out religious liberty protections that are far from comprehensive, and are neither affirmative nor enforceable outside of the limited protections in Section 6(b) – it is fair to say that the amendment treats religious liberty as a second-class right.”

“We reiterate,” they declared, “Cardinal Dolan’s November 17 statement: ‘Senators supporting the Act must reverse course and consider the consequences of passing an unnecessary law that fails to provide affirmative protections for the many Americans who hold this view of marriage as both true and foundational to the common good.’”

On Monday, the Supreme Court began hearing the case of an individual web-designer who refused to make a website promoting homosexual unions for a couple based on her Christian beliefs regarding the nature of marriage. As the bishops pointed out, such lawsuits are being leveled against individual Christians in spheres of activity outside the solemnization of marriage. It is such individuals of faith, in addition to religious organizations, who are liable to being forced to recognize same-sex “marriages” in future legal battles.

In addition to this latest letter to the Members of Congress, U.S. bishops have also previously addressed the anti-marriage bill passing through Congress. On November 17, Dolan issued a statement in response to the Senate’s vote to advance the bill. And in July, Archbishop Salvatore Cordileone of San Francisco and Archbishop William Lori of Baltimore, as Chairmen of the USCCB Committees on Pro-Life Activities and Laity, Marriage, Family Life, and Youth wrote a letter to the House of Representatives; Cordileone wrote another letter to the Senate. In each of these letters, the bishops opposed the bill and called on legislators to vote against it.

Similarly, on November 15, Dolan published an article titled, “The ‘Respect for Marriage Act’ Stacks the Deck against Religious Freedom.” In the article, the cardinal strongly defended the “beautiful, timeless, truths about marriage, rooted in both faith and reason.”

He declared “Holding the traditional understanding of marriage is now a decidedly counter-cultural act, as public support for same-sex unions is at an all-time high. Acknowledging this fact will not deter us, however, from bearing witness to the beautiful, timeless truths about marriage, rooted in both faith and reason: men and women are complementary; every child deserves a mother and a father; and marriage is a permanent and exclusive union, open to the transmission of human life, and an exercise in loving sacrifice that transcends the mere self.”

The Act must pass the House again before going to the president’s desk for signature.