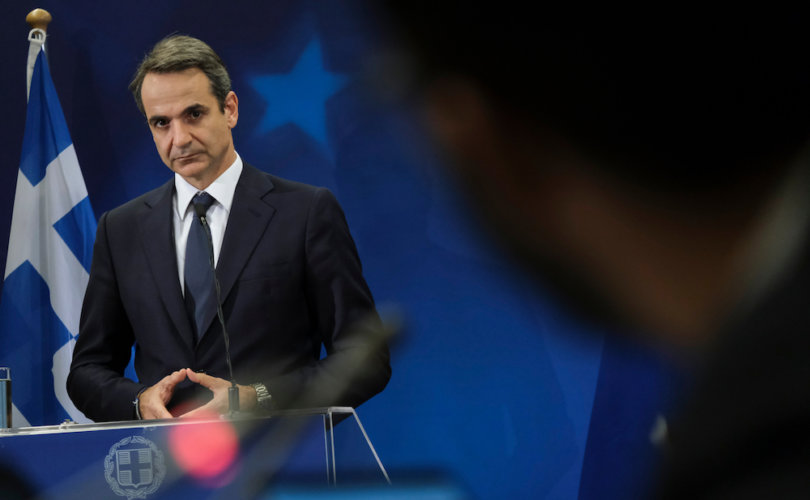 ATHENS, Greece (LifeSiteNews) – The Greek government announced one of the world’s most radical COVID vaccine mandates on Tuesday, declaring that all people over age 60 must get the vaccine in less than two months or face fines.

Anyone over 60 years old who does not get the first shot by January 16 will face a monthly fine of 100 euros (around $112), according to the Greek Reporter. The money from the unvaccinated will reportedly be distributed to Greek hospitals.

The move makes Greece the second country in Europe, following Austria, to impose a blanket vaccination mandate for citizens.

Around 61 percent of the Greek population is “fully vaccinated,” and more than 500,000 people older than 60 continue to refuse the experimental COVID-19 jab, Prime Minister Kyriakos Mitsotakis said in a statement Tuesday.

Mitsotakis described his extreme new mandate as “an act of justice for the vaccinated” and a “health fee.”

“Unfortunately, of the 580,000 unvaccinated of our fellow citizens over the age of 60, only 60,000 set up appointments to get vaccinated in November,” Mitsotakis said. “Those over 60 who have not been vaccinated will have to make an appointment by January 16, otherwise a fine of 100 euros will be imposed,” he added.

The prime minister also said that the omicron variant “is a concern for us and means we must be vigilant.”

Earlier this month, Greece mandated proof of vaccination or a negative COVID-19 test to access a wide range of businesses and public services, including banks and shops. Mitsotakis’s government additionally unveiled twice weekly testing rules for all unvaccinated public and private workers.

Incredible! A literal human tide makes waves on a Monday in #Athens, #Greece against draconian vaccine mandates and passports.

The government has recently doubled down on the "pandemic of the unvaccinated" narrative and banned those that do not comply from all enclosed venues. pic.twitter.com/QFUm8FnuPJ

Mitsotakis’s “health fee” also comes amid an ongoing economic slump in the southern European country. The average Greek pension is roughly 730 euros per month, according to The Independent.

“People may not have enough to eat. How will they pay? Some could be sick, some could not be able to pay, some this, some that,” one retiree who cannot get jabbed due to health problems told the outlet. “It is not a correct decision.”

Despite Greece’s vaccine rollout, previous vaccination mandates, and strict public limitations, the nation has reported a record spike in COVID-19 cases in recent weeks. Greece has a COVID case fatality rate of just 1.9 percent, according to Johns Hopkins University. 18,067 of the nearly 1 million Greeks who have contracted the virus have died of it, as of Tuesday.

Greece uses the Moderna, Pfizer-BioNTech, Janssen, and AstraZeneca COVID-19 vaccines, all of which have significant connections to abortion and documented links to serious side effects. Millions of adverse reactions and tens of thousands of deaths potentially connected to COVID vaccination have been reported to the EU’s drug reaction database.

Though Europe has among the highest rates of “full vaccination,” many highly-vaccinated European countries have seen a historic surge in infections and a wave of breakthrough cases, which have dominated recent COVID deaths in multiple countries, including the U.K. and Sweden.