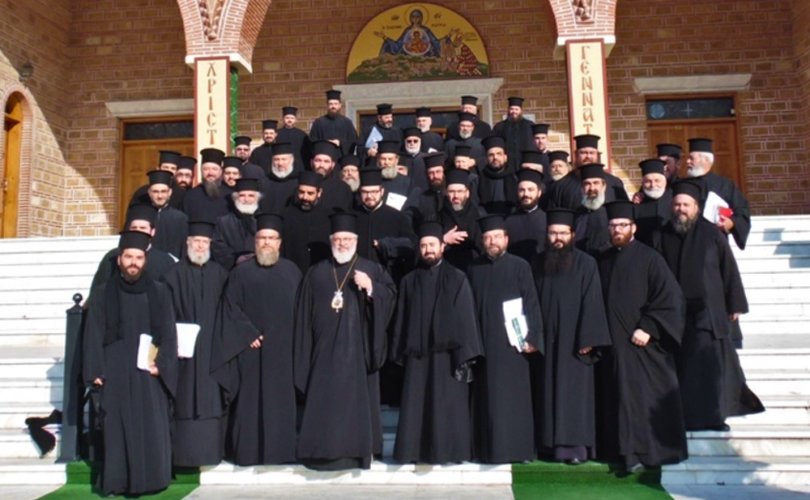 Clergy of the Diocese of Orestiada.pravoslavie.ru

GREECE, January 3, 2018 (LifeSiteNews) – The priests of an entire diocese in Greece are raising the alarm about the impending destruction of their nation that they say is being brought on by state-supported abortion and other immoral laws.

Clergy of the Diocese of Orestiada of the Greek Orthodox Church unanimously issued a declaration in December on the dire condition of the country. Specifically, the men are laying blame on the government for “systematically destroying the foundational institutions and values of Greek society.”

“Our villages are dying out and schools are closing from lack of students. Unfortunately, the authorities are showing their indifference to people who want to give birth and raise their children,” they stated.

“We demand that the government render support to underprivileged and large families instead of wasting huge budget funds on financing 300,000 annual abortions,” they added.

Greece “is hanging on the edge of the abyss,” they said.

The clergy criticized a new Greek law allowing teenagers to legally “change” gender without so much as a counseling session.  “On the Free Change of Sex,” passed by Parliament 148-124 in October, grants gender-change-on-demand to anyone 15 years of age or older.

Orthodox leaders throughout the country opposed the law as “immoral” and “monstrous,” and criticized Prime Minister Alexis Tsipras for abandoning “Holy Tradition” in support of it.  The Holy Synod of Bishops warned it is an “affront to society,” threatens “the sanctity of the family” and will “destroy mankind.”  Numerous churches across the nation rang their church bells in mourning upon the bill’s passage.

The Orestiada clergy also decried other liberal laws that they say is harming Greek society, including the “On Free Cohabitation” law that dismantled cultural support for marriage, family, and morality.

The Orestiada pastors particularly note the negative impact of state-supported anti-Christian philosophies on youth.  Increasingly, schools are indoctrinating Greek students on homosexuality and promoting gender ideology.  They cite some curricula which include analyses of phallic symbols and discussions on premarital sex in adolescence.

The diocesan priests also note changes in school textbooks on history and religion.  They say history classes are being falsified, and religious instruction is perverted to foster doubt and confusion.

The pastors called upon citizens and civil authorities to “stop the catastrophic decline of Greece” by repentance and return to Christian values-based laws and education.