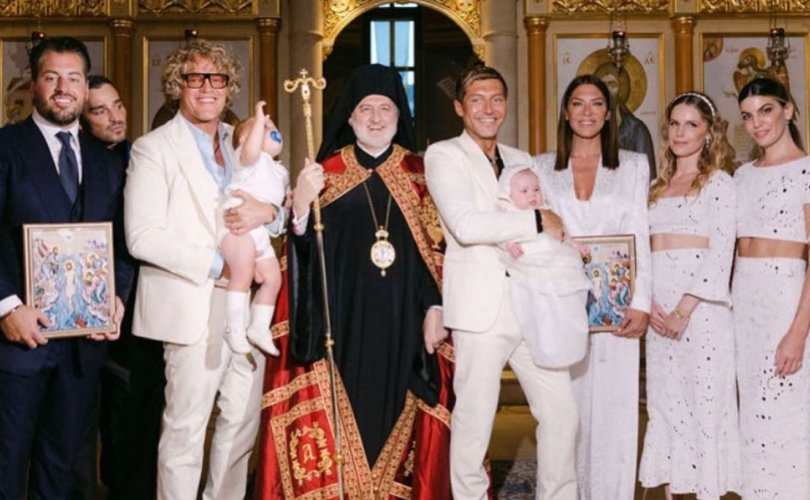 (LifeSiteNews) – A bishop who delivered controversial remarks at this year’s U.S. March for Life performed the first-ever baptism of children of a gay “married” couple –born through surrogacy – in the history of the Greek Orthodox Church.

The homosexual parents, actor Evangelo Bousis and fashion designer “husband” Peter Dundas, had their two children baptized by Archbishop Elpidophoros, head of the Greek Orthodox Archdiocese of America, who flew to the Athens suburb of Vouliagmeni to for the occasion.

The homosexual parents, relatives, and friends praised Elpidophoros for what they viewed as an historic moment of change, but many conservative members of the international Greek Orthodox Church criticized the archbishop for the move, characterized by some as heretical.

“Last night was one of the best nights of our lives!! We are proud to have christened our children Alexios and Eleni in the first openly gay baptism in the Greek Orthodox church!” Evangelo Bousis wrote in an Instagram post.

“The Archbishop of America, his Eminence Elpidophoros for pushing change and love with no judgment of anyone in the church and honoring us by christening our angels. We want to thank our families and friends who joined and our 8 godparents!” Bousis said.

“Yesterday was truly a special moment not only for my family and me but for our entire Greek Orthodox Church,” Bousis’ brother, George, commented on Facebook. “My brother Evangelo Bousis and Peter Dundas became the first openly gay couple to hold a baptism for their children, my godson Alexios and niece Eleni.”

While thanking Archbishop Elpidophoros for christening his brother’s children, George Bousis declared, “This is the progress and leadership we need in our church.”

The baptisms were followed by a “meal and wild party,” attended by celebrities, according to the Greek language magazine, OK!

When concern over the baptism was brought up by other Greek Orthodox hierarchs at their July Synod, Ecumenical Patriarch Bartholomew, who presided over the meeting, “ignored the matter and did not allow anything about it to be included in the announcements, sending the message in all directions that he is covering for and supports Archbishop Elpidophoros,” according to a The National Journal report.

Ecumenical Patriarch Bartholomew, during the meeting of the Holy Synod in Constantinople last Thursday and Friday, July 21 and 22, received from synodal hierarchs an almost unanimous number of remarks, concerns, revelations, and complaints about the arbitrariness and actions of the Archbishop Elpidophoros of America which have put the Ecumenical Patriarchate and the Patriarch himself personally in a difficult position. It was one of the few times that so many hierarchs expressed themselves in this way.

In a Vogue magazine interview in June 2021 after the birth of their first child, Bousis said that living in Los Angeles “made everything easier … It’s normal here to have a family the way we’ve created our family,” he and his “husband” want homosexual couples obtaining children through extreme medical interventions and surrogacy to become normal throughout society.

Hopefully things will change, the way gay couples are looked at having a family. I think the more people talk about it, the better I think it is just to normalize it all because it should be something normal. We always wanted to have a family and now we can, and everyone should be able to.

Dundas expressed bewilderment that religious adoption agencies might object to handing children over to homosexual parenting:

What I don’t get about the Supreme Court ruling [that a Catholic social services agency in Philadelphia could refuse to work with same-sex couples who apply to take in foster children], what is the purpose? Do they really think in 10 years from now that’s gonna fly? I don’t think so for a minute.