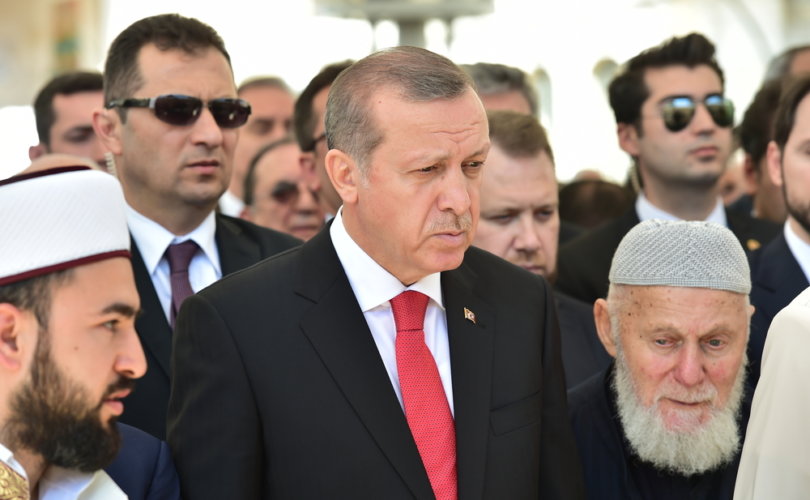 May 10, 2017 (LifeSiteNews) – Greek Orthodox Metropolitan Seraphim of Piraeus has sent an open letter to president of Turkey, telling the Muslim head of state that he and his family must convert to Christianity or face “suffering, eternal and unending Hell.”

The Greek prelate said Islam is a “demagogic false religion” that is “based on a number of illusions,” and called Muhammed a “false prophet.” He said as well in the lengthy letter to Recep Tayyip Erdogan that the Quran is not a “holy” or “sacred” book.

“If you want to save yourself and your family, you should convert to the Greek Orthodox Church, the only real faith,” Metropolitan Seraphim wrote.

“We propose and we advise you to come to the arms of the Greek Orthodox Church before the end of your life on Earth,” he said. “Otherwise, you will unfortunately find yourself, your family and your people in the same place where Allah, Muhammad and his followers are, i.e., in the place of suffering, eternal and unending Hell.”

Written in Greek and reported on by various outlets in the U.S. and overseas, the letter opened by addressing the crisis situation in the Middle East.

Metropolitan Seraphim also described some of the differences between Christianity and Islam, CNS News reported, and cited examples of how the Quran uses material from the Bible and other religious writings. He also goes into some of the controversial parts of Muhammed's life, such as the prophet marrying one of his wives when the girl was just nine years old.

In the latter part of the letter, the Greek bishop calls on President Erdogan and his family to convert to Christianity. He implores them to “renounce all errors, heresies, and innovations of Islam” and “repent, to weep bitterly, be humble, and believe in Christ, the God-Man, Savior and Redeemer of the world.”

Erdogan, 63, is a Sunni Muslim. He is married with four children, and became president of Turkey in August 2014. His parents were reportedly devout, practicing Muslims.

The Greek prelate’s forthright comments about conversion and the risk of damnation without it came after the latest round of criticism of proselytism from Pope Francis.

Addressing a lay association at the Vatican late last month, the pope spoke negatively about “proselytism or coercion,” “which goes against the Gospel.”

“It makes me really sad to see people who are in ministry – lay, consecrated, priests, bishops – who are still playing the proselytism card,” he stated.

The pope had also told the German newspaper Die Zeit in March that “By proselytism (which he defined in part as “the poaching of those with a different faith”), you will not gain vocations.”

Francis had said in October that “there is a very grave sin against ecumenism: proselytism. We should never proselytize the Orthodox!”

Also that same month, Pope Francis told a group of Lutheran pilgrims at the Vatican, “It is not licit that you convince them of your faith; proselytism is the strongest poison against the ecumenical path.”

In a 2013 interview, the pope said, “Proselytism is solemn nonsense, it makes no sense.”

The frank assessment of Islam from the Greek patriarch also contrasts markedly from the Diocese of Orlando’s recent reprimand of a teacher for using writings in religion class from St. John Bosco that were critical of Islam.

A diocesan representative had said the teacher’s use of the material from the saint constituted an “unfortunate exhibit of disrespect.”

Metropolitan Seraphim had spoken critically and openly of gay “marriage” as well in 2014 when legalization of same-sex civil unions was being pushed in Greece at the time.