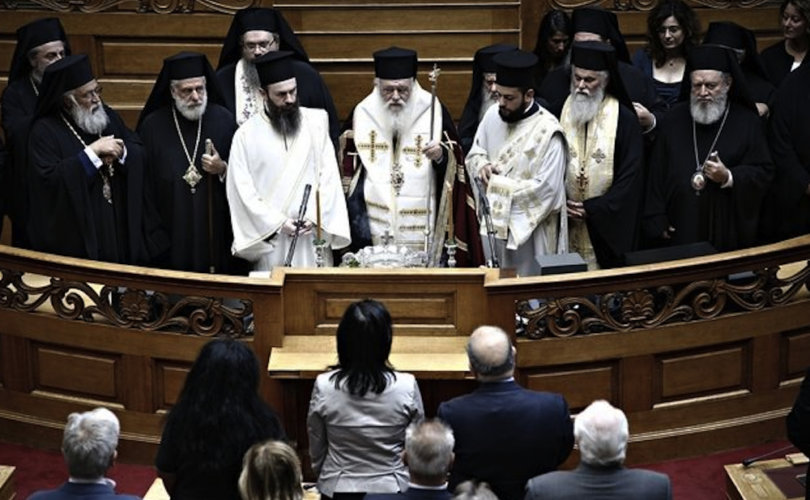 Archbishop Ieronymos of Athens and All Greece offered a stinging rebuke of the 'transgender' law.

ATHENS, Greece, October 23, 2017 (LifeSiteNews) — Christian churches in Greece are ringing their bells in mourning over a radical transgender law passed earlier this month.

Metropolitan Ambrose of Kalavryta and the clergy of his diocese are ringing their church bells loudly every day at noon for three minutes.

“It is an outrageous inspiration for someone to change his gender in a few minutes, with a simple declaration, so contrary to what God has gifted people with,” the clergy of the diocese wrote in a released statement. “Whoever has ‘gender dysphoria’ is mentally ill.”

Historically, church bells ring in joy before services, in mourning before funerals, to alert the community to important news, or as a warning before an attack.

“We are engulfed by unease as to what the future is preparing for us,” the monks of Mount Athos wrote to the Ministers of Education and Justice of the Greek Republic. Is it really permissible in our Orthodox fatherland to legally and blatantly defy Divine law?  ‘God created man in His own image, in the image of God He created him; male and female He created them’ (Gen. 1:27).”

“On the Free Change of Sex” passed with 171 votes in a 300-member Parliament on October 10 with the strong backing of Prime Minister Alexis Tsipras. It grants legal recognition to sex changes without any requirement other than the desire of the applicant, allowing anyone age 15 or older to legally change gender.

The new law officially makes gender a matter of personal choice completely unrelated not only to biology but to any medical or psychological diagnosis confirming gender dysphoria. The government sanction on gender-by-declaration need not be evidenced by therapy, testing, counseling, hormones, or surgery.

Orthodox Church leaders unanimously condemned the law as “immoral,” “blasphemous,” “unnatural,” “madness,” “satanic,” “sin,” an “affront to society” and a threat to “the sanctity of family.” The Holy Synod of the Orthodox Church of Greece warned that the law will result “in the dissolution of social cohesion and the spiritual death of man.”

Ambrose and his Orthodox faithful are calling on Parliament to repent of the “anti-Christian and anti-Greek” law. The clergy statement says sodomy is a “deadly sin” related to “bestial deviation,” and will result in homosexuals adopting vulnerable and impressionable young children.

Jesus warned against anyone who leads a child astray. “He put a child in the midst of his disciples, and said …’Whoever causes one of these little ones who believe in me to sin, it would be better for him to have a great millstone fastened round his neck and to be drowned in the depth of the sea’“ (Matthew 18:6).

The Kalavryta clergy will put up protest posters throughout Aigion, the largest diocesan city. “We do not hate the sinner, but the sin,” the statement reads.

Stavros Kontonis, the Minister of Justice, Transparency and Human Rights, admitted that the law was passed because of heavy pressure from globalists. Ambrose said that “with surprise” he learned Kontonis “revealed a big secret” to Archbishop Ieronymos of Athens that Greece has made “international commitments” over the new law.

“Our people, instead of refusing and resisting, rushed to execute their orders!” the Metropolitan lamented. “Without shame, without shyness, the chick succumbs to the rooster!” He added his opinion that the 171 MPs who voted for the law are cowards and sellouts to the globalist agenda.

In a heated rebuke against House Speaker Nikos Voutsi on October 2, Archbishop Ieronymos of Athens and All Greece said it is wrong to completely separate church and state. “Have you considered what the role of the Church is, not only in Europe but the entire world?” the archbishop corrected. “The Church has more to offer than all of Greece’s embassies.”

Previously in Greece, government legal recognition of a gender change had to provide proof of having had surgery and a psychiatric evaluation.