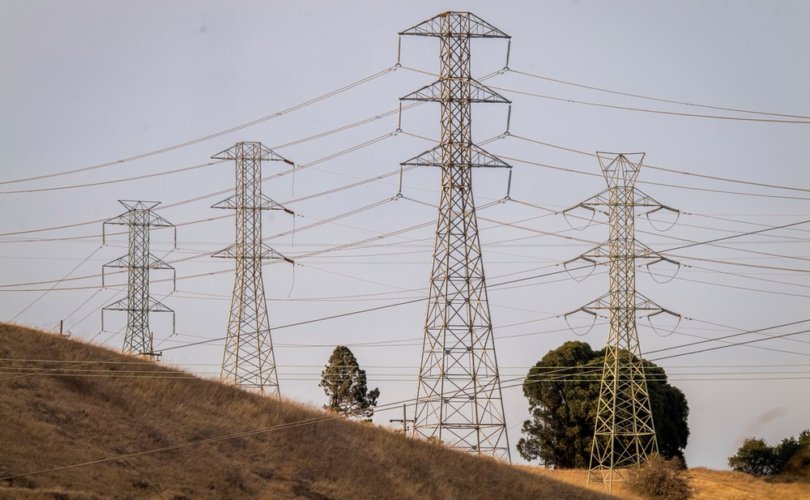 SACRAMENTO, California (LifeSiteNews) — Californians are being asked to cut back on cooling their homes and using large appliances to prevent rolling blackouts as the state buckles under the weight of its outdated infrastructure and increasing reliance on unreliable “clean energy” sources.

The shift to green energy exemplified in the Golden State has been a key element of the global left-wing climate agenda.

This week, California residents received multiple statewide emergency alerts and a message from Gov. Newsom asking them to “do their part” to protect the state’s electrical grid from shutting down amid a late summer heat wave affecting the western United States.

On Tuesday, California’s Independent System Operator (ISO) upped its warnings by declaring an Energy Emergency Alert 3, cautioning that the state was “unable to meet energy demand” and that rolling blackouts (temporary power outages) were “very possible.”

Also got an emergency alert on my phone as the warning was issued. Here is how @California_ISO classifies the different energy emergency levels. We are now at level 3/RED. @FoxNews pic.twitter.com/twTk97Ux5n

In response to the Tuesday emergency alert, Gov. Newsom took to Twitter to advise residents to “Set thermostats to 78, “Turn off unnecessary lights” and “Avoid using large appliances” in order to “conserve as much energy as possible during this record breaking heatwave.”

The California governor, who faced a 2021 recall election and received widespread condemnation for violating his own COVID-19 orders in 2020, drew backlash for recording a short video in which, while wearing a fleece jacket, he cautioned Californians to help prevent power shutdowns by pulling back on cooling their homes.

On Wednesday, however, California ISO extended another “flex alert” from 4 p.m. to 9 p.m., and on Thursday issued a Level 2 Energy Emergency Alert.

#ISO has issued an Energy Emergency Alert (EEA) 2 effective today, from 4 p.m. – 9 p.m. When an EEA 2 is called, @California_ISO requests emergency energy from all resources and may activate its demand response program. https://t.co/oR4B23tvzO pic.twitter.com/kPnRYoJvwl

Conservatives have been quick to blast the Golden State for asking residents to bear the brunt of the government’s inability to supply sufficient energy to meet demand.

Critics specifically pointed out that the emergency alerts came just weeks after Gov. Newsom signed legislation banning the sale of new gas-powered cars by 2035, a move that would sharply increase strain on the grid as more Californians switch to electric vehicles.

California’s energy woes come as the state has led the way in adopting “clean energy” alternatives to traditional resources like natural gas and coal, and failed to maintain its overtaxed existing infrastructure. In May, the state made headlines for meeting 100% of its electricity demand from “renewable sources,” including solar panels and wind turbines.

But threats of looming blackouts and requests that residents voluntarily curtail personal power usage despite paying hefty taxes and energy bills have led some to suggest that California’s “energy transition” may be less than a success.

Meanwhile, an image of a Californian’s Tesla being charged using a portable gas-powered generator went viral over the past week, leading critics to point out that California residents are actually being forced to rely on traditional fuel sources thanks to the state’s unworkable “renewable energy” shift.

“When you realize a battery is a storage unit instead of a power source, you realize EVs run on coal,” remarked California Republican candidate for U.S. Senate Mark Meuser.

The hard shift to “clean energy” exemplified in California has been a central plank of the global left-wing climate agenda and a major component of the WEF’s “Great Reset,” which “seeks to ‘push the reset button’ on the global economy” and “reimagine capitalism.”

According to the WEF founder Klaus Schwab, “[e]very country, from the United States to China, must participate, and every industry, from oil and gas to tech, must be transformed.”