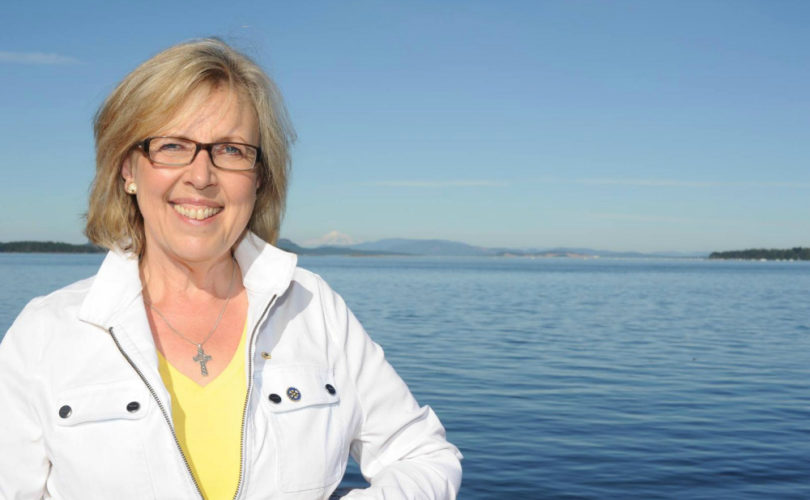 OTTAWA, July 13, 2015 (LifeSiteNews) — Green Party leader Elizabeth May admits she signed a population control resolution calling for financial sanctions against families who have more than two children, and for Canada to support abortion access worldwide.

But although she signed it, May disavows endorsing the resolution as written. “There’s ways to read it that I would find unacceptable,” she told LifeSiteNews in a telephone interview. “Why I signed was that I could see how it can be acceptable.”

Yet even as May distanced herself from the resolution, promoted by the Population Institute of Canada (PIC), Britain’s Conservative government adopted a measure similar to one the Ottawa-based NGO is calling for – although, arguably, for ostensibly different motives.

PIC’s resolution calls for cutting off additional tax benefits and government payments for couples who have more than two children, and immigration quotas that consider Canada’s environment and “quality of life for Canadians.”

It also asks that Canada’s development aid not “impose any restrictions” on family planning, maternal health or “women’s right to choose” that are “inconsistent with Canada’s own laws and practices,” and that Canada support women’s rights worldwide to have “access to the same reproductive health services” Canadian women have.

Only May has so far signed the three-part “Resolution on Population and Environment” PIC sent to MPs and senators on June 10, according to PIC president Madeline Weld.

“I am very well aware of what a touchy subject this is and how anything pertaining to population growth and immigration is very sensitive, and politicians are very careful not to want to offend anyone for obvious reasons,” Weld, former director of the Humanist Association of Canada and one-time director of Planned Parenthood Ottawa, told LifeSiteNews in a telephone interview.

Indeed, May faults PIC’s resolution because “it might look like there is an unfeeling dismissiveness towards additional children,” and points out that the Greens want more, not less, immigration, “because we want to ensure we have a stable work force.”

She signed it because “the Green Party is the only federal party that has a policy on global population” and “population is a real issue and other parties are ducking it,” May told LifeSiteNews.

The Greens would achieve a “stable global population” through increasing “education and health care and economic and political autonomy for women and girls,” May explained. “And when you do that globally, levels of population and fertility do invariably balance out.”

“We are quite against any of the heavy-handed efforts of the past around population control,” she told LifeSiteNews, “that language makes me extremely squeamish and is wrong morally and also doesn’t work pragmatically.”

May also said that if “economic pressures are leading a woman to consider terminating her pregnancy our ‘pro-life/pro-choice policy’ calls for support of that woman.” At the same time, she reiterated that the Greens “definitely support that we need to have legal access to safe abortion, because we don’t want women dying in back alleys.”

“I do believe firmly that we can make things work for everybody,” May concluded.

Campaign Life Coalition president Jim Hughes described it as “unfortunate that the Green Party leader signed on to a document that calls for, in layman’s terms, a two-child policy in Canada.”

Hughes was commenting on the resolution’s call that “all tax credits and government payments be structured so as not to provide additional funding to families with more than two children.”

“Preserving the sustainability and wellbeing of Canadians must always start by placing the human person at its center,” Hughes emphasized. “This overpopulation lobby, however, thinks that killing people by abortion and preventing births is the solution.”

Canada’s population has in fact been below replacement level for nearly four decades, according to a 2011 Statistics Canada, while a 2008 StatsCan report warned that if fertility declined from the then 1.5 children per woman, deaths would begin to outnumber births by around 2020.

But Weld says these gains in depopulating the nation through a birth dearth have been offset by the arrival of new Canadians.

“We’ve had pretty much mass immigration since 1990 started by Brian Mulroney, so we’re taking in at least a quarter of a million every year, regardless of the economic situation,” Weld told LifeSiteNews, adding that in 2010, Canada allowed in over 500,000 immigrants, if one includes temporary former workers in that total.

Indeed, two-thirds of the current growth of Canada’s population is “due to immigration,” Weld claimed, but added that PIC’s resolution makes no “absolute statement” asking for a ban on immigration, only that “we would suggest to Canada and all countries that we have some kind of a population policy.”

She also argues that Germany’s “natural increase is now negative, and it’s the economic powerhouse of Europe, so I think that throws to the wind that you need to have a constantly increasing population.”

Germany, however, experienced its highest immigration levels in 2013, according to the country’s statistic website Destatus, and after the United States, is the second most popular destination country for immigrants.

A biologist with Health Canada, Weld contends that people who are “concerned about population growth” are “not quite mainstream yet,” although “we certainly are with biologists and ecologists, but not with economists, who don’t believe in limits to growth apparently.”

It’s notable that one of PIC’s patrons is conservation biologist Paul Ehrlich, the 83-year-old Stanford University-based population alarmist and butterfly researcher whose 1968 book The Population Bomb set off a worldwide panic over population growth.

“Overpopulation is a myth,” points out the pro-life Population Research Institute (PRI), but it is one that “has caused human rights abuses around the world, forced population control, denied medicines to the poor, and targeted attacks on ethnic minorities and women.”

And it is tenacious, with population alarmists continuing to campaign, as evidenced by John Gruetzner’s lament in a July 7 Hill-Times opinion piece that Canada’s media “by and large overlooked” the PIC resolution.

“A commitment to zero population growth offers a large number of people more humanity long term and better conditions to sustain our current levels of prosperity,” warned Gruetzner, a card-carrying Liberal and vice-chair of a business consulting firm with links to China.

“The post-modernist collapse depicted in the Mad Max film series will only be science fiction if we fail to project what the future holds for us and not act now,” he added ominously.

However PRI, whose president is social scientist Steven Mosher, methodically debunks the overpopulation myths, asserting that the “human race is in no danger of overpopulating the planet, and in fact is facing a demographic collapse.”

Even the traditionally left-wing New York Times has admitted that Ehrlich’s dire predictions have come to naught.

Ehrlich’s contemporary and most vocal opponent was the late Julian Simon, professor of business administration at the University of Maryland and fellow of the Cato Institute. Simon told Wired Magazine in 1997: “Whatever the rate of population growth is, historically it has been that the food supply increases at least as fast, if not faster.”

According to the Federalist’s Paul Tracinski, “The ‘ultimate resource’, Simon argued, is human thought and ingenuity which is constantly discovering untapped resources and inventing new ways to use them.”