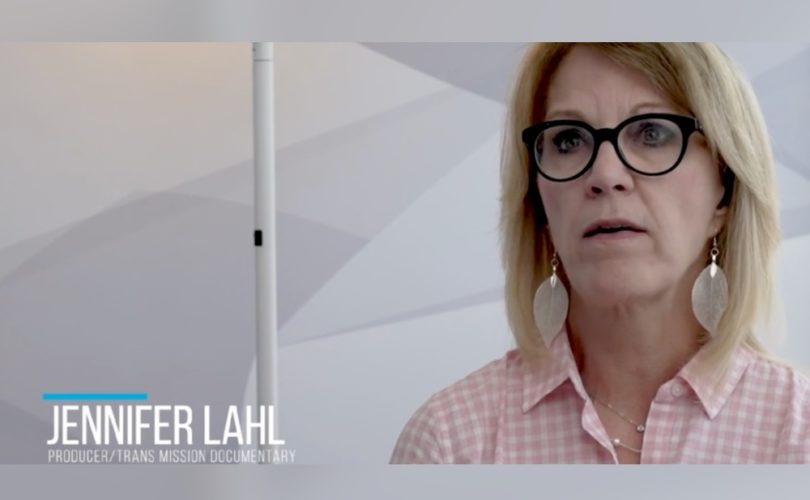 Jennifer Lahl, President of the Center for Bioethics and Culture, produced a groundbreaking new documentary on the rush to commit children to a lifetime of irreversible gender 'treatments'

July 22, 2021 (LifeSiteNews) – A powerful new documentary on transgenderism cautions parents to think twice before consenting to a child’s gender “transition.”

“I think [transgenderism] is a horror because we’re experimenting on children. This is medical experimentation,” Jennifer Lahl, a longtime pediatric critical care nurse, told LifeSiteNews.

“We’re allowing children with their parents’ permission to do things with their body that we have no idea what the short and long term harms are going to be,” said Lahl.

As founder and President of the Center for Bioethics and Culture, Lahl created the documentary Trans Mission: What’s the Rush to Reassign Gender?, which features interviews with pediatricians, pediatric endocrinologists, parents, and men and women who regret the irreversible changes from attempted gender “change.”

The film discusses common contributing factors to gender dysphoria, making the case that the desire to change one’s sex is often a coping mechanism that ignores the root psychological causes of the dysphoria.

“When we’re speaking of rapid onset gender dysphoria, [there is] overwhelming probability that there was something messy going on in the family, a bad divorce or something like that,” Andre Van Mol, M.D., a board certified family physician, explained in the film.

As Van Mol speaks, a list of potential causes and contributing factors to gender dysphoria is displayed, including sexual trauma, autism, immersion in transgender culture, being bullied for not conforming to gender stereotypes, and post-traumatic stress disorder.

“There’s those kind of underlying issues that need to be dealt with. And the understanding was that since they’re tied together… support toward helping those mental health issues, overcoming the traumas, the adverse childhood events, helping family dynamics – that when you help to correct those, you will also be helping to correct the gender dysphoria. That’s the idea of watchful waiting.”

Lahl said the film also addresses the desire to change gender as a way to cope with the “rough time” of puberty.

“Now we deal with this natural thing called puberty, this awkwardness that sometimes we go through, and say, ‘well there’s something wrong with you, you’re born in the wrong body. So we’re going to allow you to medically and surgically transition your sex.’”

The consequences of attempting gender “transition,” the film reveals, can be far more serious than many parents realize.

One anonymous parent explained that her daughter suffered brain damage as a result of her hormone therapy:

My daughter was on testosterone for four and a half months and it did a lot of damage to her brain. Because she had some underlying issues, she should never have even been prescribed testosterone. So she has a lot of memory problems now and that really bothers her.

The film also highlights testimonies from a man and a woman who regret their attempts to change their gender. The woman, who remains anonymous, described her desire to become a man as a way to dissociate from past traumas.

In addition, the documentary touches on the lawsuit of a young woman from the U.K., Keira Bell, who sued an NHS gender clinic for not “challenging” her more over her desire to “become” a male at age 15. She was suffering from severe depression and anxiety at the time, and came to deeply regret her decision, and the irreversible procedures she underwent.

“She won the lawsuit in the highest courts of the United Kingdom,” explained Lahl. “As those voices kind of mount and there’s more and more of those de-transitioners speaking out, I think that the medical community and the insurance providers who are covering this as a ‘treatment’ are going to be put on notice and there’s going to be some serious lawsuits.”

Lahl told LifeSiteNews that the film’s ultimate goal is “to get people to stop and pause” before deciding to transition or facilitate their child’s transition.

“What I’m hoping is, that we can have a good public debate about this, that we can better understand what we’re doing as it relates to children. And maybe we don’t want to do things that are permanent and irreversible.”

The documentary film is currently available to view for free on YouTube.

Lahl also directed and produced Breeders: A Subclass of Women?, a documentary examining the surrogacy industry; directed Anonymous Father’s Day, about the deep longing of donor-conceived people to know where they came from; and produced Eggsploitation, about the infertility industry and its coercive tactics to harvest eggs from young women.

More and more ex-transgenders are speaking out about the harms of “transition” and how the medical professionals they saw rushed them into hormones and genital-altering surgeries.

Abigail Shrier, author of Irreversible Damage: The Transgender Craze Seducing Our Daughters, recently wrote a lengthy article in City Journal titled When the State Comes for Your Kids. She interviewed a number of parents whose children were pushed toward transgenderism by hospital staff (usually during an adolescent mental health crisis) and workers at “youth shelters.” The transgender contagion is a major threat to parental rights, she concluded.