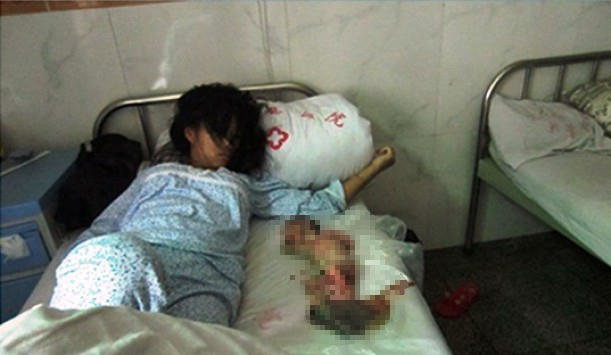 The woman in the photos is 23-year-old Feng Jianmei from the province of Ankang, who was “forced to the hospital and given an injection to kill her unborn baby on June 2."

June 14, 2012 (LifeSiteNews.com) – Photos of a forcibly-aborted seven-month-old unborn child lying next to his mother in a Chinese hospital are provoking outrage among viewers and demands for justice as they circulate on Chinese-language websites.

According to the Chinese news service Global Times, the woman in the photos is 23-year-old Feng Jianmei from the province of Ankang, who was “forced to the hospital and given an injection to kill her unborn baby on June 2 after her family failed to pay a 40,000-yuan ($6,320) fine, according to her family.”

Chinese Blogger Zhao Chu, in a post linked to the Internet news portal Netease.com, said that such behavior goes “against the basic norms of civilized society,” and added that “there is no essential difference between our society” and the “slaughter in Iraq, Libya, Syria…Auschwitz” or “the Japanese gas chambers”.

A reader commenting on the Chinese site clubkdnet.net wrote that the Chinese government has been “openly killing people for years in the name of national policy,” and asked “what’s wrong with society?”

“China clearly prohibits women who are over six months pregnant from undergoing abortions,” wrote the Global Times in an editorial. “If the Ankang case is true, the local officials obviously violated the relevant policy and should be punished.”

According to the Evangelical Protestant organization China Aid, a well-known Chinese attorney named Zhang Kai has stated that he will travel to Zhenping and offer help to “seek a legal remedy.”

“Out of basic humanitarian concern, I will travel in the next few days to Zhenping to offer legal assistance to the victims. I cannot accept that this kind of blatant murder in the land that we live in. To ignore it is, I think, to be no different than the murderer. This is a crime against humanity,” he reportedly wrote on his blog.

A public relations official at China’s National Population and Family Planning Commission (NPFPC) told the Global Times yesterday that they are investigating the case.

“We’re trying to get the whole story. If it’s true, local family planning authorities will surely be punished severely,” the official, with the first name of “Qin,” told the Times.

The case is only one of many reports of regular forced abortions of women who fall afoul of China’s “One Child Policy,” which allows urban inhabitants to have only one child, and those in some rural areas to have only two. The policy is enforced with a system of penalties that include fines up to six years wages, the destruction of homes and confiscation of cattle, and the coerced killing of unborn children in cases in which parents can’t pay.

As a result of the policy, families tend to kill their unborn daughters in favor of sons, causing a massive imbalance in the country’s sex ratio – in some provinces, as high as 130 male births to every 100 female births. The population is also aging rapidly.

The forced abortion follows the case of Cao Ruyi, a Chinese woman who was imprisoned in a hospital in the city of Changsha, in the province of Hunan, where family planning officials offered her the choice between paying a huge fine or undergoing a forced abortion. According to latest update from China Aid, after an international outcry, Cao was released from the hospital on Sunday, although officials are still attempting to force her to pay a fine of $25,000 to keep the baby, on top of the $1500 already paid.

China’s One Child Policy is aided by the United Nations Population Fund (UNFPA), which receives $50 million annually from the administration of U.S. president Barrack Obama.

According to an investigation carried out by the U.S. State Department in 2002, “UNFPA’s support of, and involvement in, China’s population-planning activities allows the Chinese government to implement more effectively its program of coercive abortion,” in the words of then-Secretary of State Colin Powell.