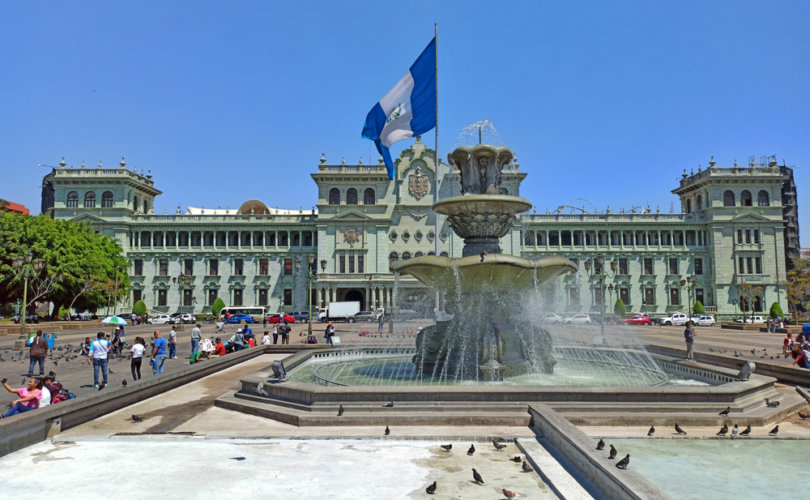 Congress of the Republic of Guatemala Shutterstock

GUATEMALA CITY (LifeSiteNews) — Pro-life activists in Guatemala have said their anti-abortion laws are now firmly in the cross hairs of leftist politicians and the International Planned  Parenthood Federation (IPPF) after a bill was presented Thursday in Congress that could decriminalize abortion up until the 12th week of pregnancy.

The proposed reform of the country’s Penal Code would also render opposition to gender ideology a “hate crime” according to critics of the motion.

The leftist-led Justice Sector Reform Commission of the Congress of the Republic of Guatemala has proposed redefining abortion from being “the death of the product of conception at any time during pregnancy” to characterizing it as “the interruption of pregnancy through the expulsion or total extraction of the fetus, causing its death.”

In a sinister move, according to pro-life groups, this new emphasis on “the fetus,” which dispenses with mention of death “at any time during pregnancy,” would strip protections from the pre-implanted and embryonic human being after conception, leaving the door open to abortion as late as 12 weeks due to disagreements about when the human embryo becomes a human fetus.

Guatemala is one of the few Latin American countries that has preserved strict laws against abortion at all stages of pregnancy due to its constitutional protections of human life from the moment of conception.

Abortion is allowed, however, when the mother’s life is said to be at risk, despite ample medical evidence and testimony making clear that abortion is not needed to save the lives of pregnant women.

Among Latin American countries, only El Salvador, Nicaragua, Honduras and the Dominican Republic have total bans on abortion.

Speaking to LifeSiteNews, Elena Gaytan of Guatemala’s Asociación la Familia Importa (Family Matters Association) said the latest attempt to legalize abortion comes as no surprise because money from abroad had been pouring into the coffers of civil organizations and politicians there for years.

“For years, the U.N. has pressured Guatemala to legalize abortion and same-sex unions without success,” Gaytan said. “Unfortunately, Guatemala is also flooded with blood money from International Planned Parenthood Federation, giving it to civil organizations and politicians to try and legalize abortion.”

“Guatemala’s biggest pro-abortion organization also receives significant funding from the U.S. government through the Agency for International Development,” she added.

Records show that IPPF donated more than $2 million US to one pro-abortion organization in Guatemala between 2014 and 2016, with more recent figures not being released by the abortion giant.

Argentina became the latest Latin American country to radically expand access to abortion last December, when its senate passed a bill allowing abortion-on-demand up until the 14th week of pregnancy.

Meanwhile, in September, the Mexican Supreme Court ruled that the criminalization of abortion was unconstitutional, paving the way for each state around the country to legalize the life-ending practice.

Chile’s lower house of Congress also agreed later that month to debate a bill that would provide abortion-on-demand up until the 14th week of pregnancy.

As in several other Latin American countries, Chilean women currently can abort their baby in the womb if he or she is conceived as a result of rape, is considered unviable, or if the mother’s life is said to be at risk.

Asociación la Familia Importa (AFI) say Guatemala’s religious values, where approximately 40% of the 16.8 million population are Catholic and 30% are Evangelical, are the main reason people have resisted attempts to legalize abortion-on-demand and gay marriage so far.

AFI have organized several significant national demonstrations in recent years to consolidate pro-life sentiment in the country, with some 250,000 citizens protesting a proposed law allowing abortion in 2018.

Current Guatemalan President Alejandro Giammattei also signed an AFI declaration that he would defend life and marriage while in office.

One of his first steps in doing so was ordering the cancellation of a plan to open a Planned Parenthood facility in Guatemala last year.

In an official statement following the move, the president said his administration would not  tolerate violations of the Constitution.

“I recognize life from conception, and therefore my administration will not tolerate any movement violating our Constitution or which violates the values of my upbringing and medical principles,” President Giammattei said.

“I am a faithful defender of life, and my administration will not approve the creation, registration or putting into effect of any organization opposing life.”

Giammattei’s predecessor, Jimmy Morales, was previously lauded by pro-life voters there when he seized the Dutch “Women on Waves” boat from a Guatemalan port before it could transport pregnant women to international waters to take abortion pills.

AFI, which once again appears poised to lead demonstrations against the latest abortion bill, said it also hopes to launch the country’s first pro-life podcast in order to reach more citizens.

“Defending life is part of our culture, but due to the constant attacks towards our rights, it is becoming necessary to defend and protect the values that strengthen our societies in all possible spaces.” Gaytan said.

“Asociación La Familia Importa is the leading pro-life organization in Guatemala, and this project will expand the pro-life work throughout the country and reach new audiences to become the largest and most influential pro-life podcast in Latin America,” she added.