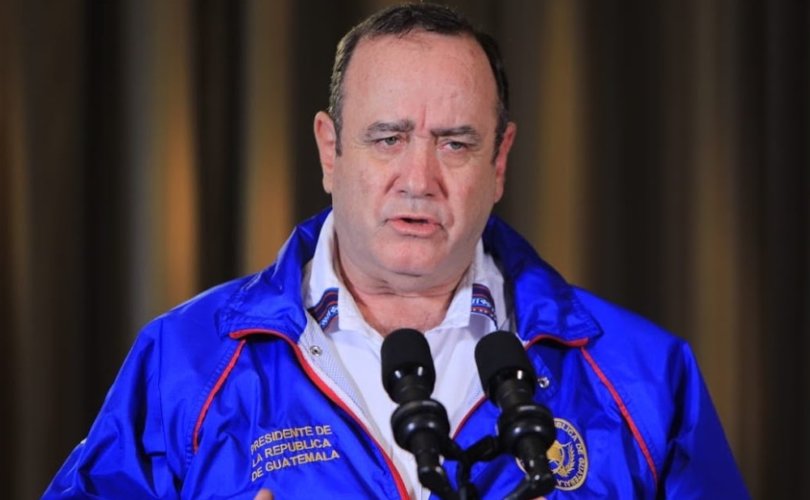 (LifeSiteNews) – Guatemala joined the international, pro-life, pro-women’s health, and pro-family Geneva Consensus Declaration (GCD) on Tuesday, an initiative of the Trump administration from which Biden withdrew the United States soon after taking office.

The declaration, which was formed in opposition to international pressure to accept abortion as a “human right” and a key part of women’s health, was given a ringing endorsement by Guatemalan President Alejandro Giammattei in a speech celebrating his country’s participation.

Guatemala’s adoption of the declaration, he said, “is a clear message to the international community that there are many countries that recognize that there is a fundamental right, a human right, to life that must be guaranteed and defended.”

“[A]ny approach that there is already a consensus in favor of abortion at the international level, as some sadly allege, it is totally false,” Giammattei continued. “Any effort to try to impose abortion on a country is undue interference in its internal affairs.”

He went on, “I must point out that these efforts to promote abortion are often made in the name of defending human rights, which is absurd. Without a legal basis, neither anthropological nor scientific, some currents of thought fabricate supposed rights, which are nothing more than the denial of the true inherent rights of the person.”

The Guatemalan president thanked Valerie Huber, currently president/CEO of the Institute for Women’s Health, for her leadership “to make this important declaration possible” while she worked for the Trump administration as special representative for global women’s health.

In an interview with LifeSiteNews, Huber shared what led to the “genesis” of the Geneva Consensus Declaration, which defends the right to life while promoting women’s health and the strengthening of the family.

“We saw that whenever women’s health was discussed internationally, women’s health came to be premised almost exclusively on access to abortion,” Huber said.

She explained that conditions were being put on funding to countries for things like “adequate prenatal care,” or providing modern primary care health facilities with adequate, trained staff, sometimes requiring these nations to “agree to radical agendas,” such as providing abortions.

“They either had to give up their core values around protecting family, or they had to give up the opportunity to have these other important healthcare services. And I thought it was a really unconscionable choice that they were being asked to make,” Huber said.

She also came to see that some countries were “being bullied” and “threatened” “if their country had pro-life laws and they weren’t willing to change them.” Even the United States under administrations before Trump’s term “were involved in these same sorts of tactics,” which Huber found disturbing.

“Outside influences, including other countries and UN agencies, should not be in the business of getting involved in internal politics protecting life and family,” she asserted.

Huber also pointed out that she had seen UN agencies use deceptive tactics in the way they presented language to member nations — or interpreted that language — with respect to the policies and programs they made available to countries.

At times, she said, “instead of paying close attention to what the member states intended” by a resolution, which is debated “line by line” over intense discussion about its meaning, an UN agency would “insert their own agenda” in such a way that what “a pro-life member state approved because they thought it was in line with their priorities now becomes a vehicle to promote abortion.”

This is a real problem, she explained, because “the only way” that these member states can access the money that comes with the program is if they accept the “strings attached to it.”

She went on, “It’s really a miscarriage of the way the United Nations is supposed to work,” because the UN “is supposed to be implementing the mandates given by the members.”

According to Huber, this international situation helped spark the motivation for the Geneva Consensus Declaration.

“The thought occurred that we needed to begin the first-ever coalition promoting women’s health; supporting the family as foundational to society; protecting life, asserting there is no international right to abortion; and finally, that countries could make their own laws on these issues, and there shouldn’t be outside interference as a result,” Huber said.

She maintains that “there could be a lot of consensus” if the “controversial issues” like abortion were not included in health care funding decisions.

Huber believes the speed with which the Biden administration erased all mention of the declaration is a testament to its value for the protection of life.

“It was a little startling that on inauguration day, the one policy that I saw removed from the government website was all mention of the Geneva Consensus Declaration. It wasn’t something that a lot of people in the United States even knew about, and yet it was taken down so quickly. It showed me that there was really a lot of value in this coalition, and that in fact it could be effective in protecting life and protecting the family under this current administration,” Huber said.

Elaborating on the impact of the declaration, Huber noted, “When you’re in a coalition, it multiplies your voice, and it multiplies your ability to have an influence. It also is more of a disincentive to those doing the bullying or applying the pressure to go after so many countries at once.”

Huber gave special praise to Giammattei for going above and beyond signing the declaration: “Guatemala and President Giammattei deserve all of the positive press that they can get, because what they did was courageous in standing up for the values of their country.”

“He could have just quietly signed, but instead he had a very high profile event, invited the press, invited members of his cabinet, and other leaders in the country. He was essentially saying: This is important to our country, we are not going to change our views, we are not going to give in to external pressure, and we are proud to join this coalition.”

“I really hope that as a result of his public and courageous action, many more countries join the Geneva Consensus Declaration and coalition.”

Guatemala brings the number of signatory countries, which include Brazil, Egypt, Hungary, Indonesia, and Uganda, to 35.