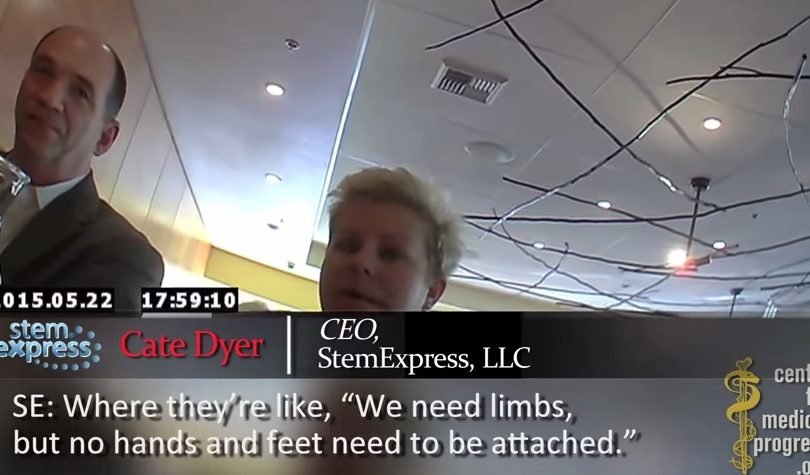 Dyer, who is seen in the most recent Center for Medical Progress video laughing that “lab techs freak out and have meltdowns” when looking at aborted babies' severed heads, revealed that she keeps a signed photograph of Hillary Clinton on her desk.

“I have a signed picture from Hillary because my sister works in Congress,” Dyer said. “I like brought it into work the next day and propped it right on my desk.”

Dyer said Ivancic was “very socially liberal,” according to a transcript of the full, unedited footage released by the Center for Medical Progress.

The sisters disagreed on health insurance policy, though – with the StemExpress CEO saying her sister supports the free market while Dyer personally favors a national health care system like that of Canada.

“I’m a big believer that if Canada and places like this can do it without an issue, we should be able to figure it out,” she said. “Europe's been doing it for some time. If you’re an American and you fall and break your leg, they just fix it for you…but for some reason we can’t seem to figure out health care in the United States.”

In the 1990s, Hillary was accused of favoring a single-payer health care system like that of Canada, which funds abortion with tax dollars through all nine months of pregnancy.

However, not everyone in the abortion and fetal organ industry trusts Hillary Clinton. Kevin Cooksy, the vice president of corporate development and legal affairs at StemExpress told undercover investigators candidly, “I can see her face making both arguments too.”

“I’m wondering if she’ll bring in the political courage to do it,' he said. “There’s a lot of people who could do it. It’s will they step up to the microphone?”

While Dyer said she appreciated the historical importance of Barack Obama's election, but he “was so sad when Hillary stepped down” during the 2008 primaries.

She added that Obama's supporters, particularly those focused on redeploying U.S. troops from Iraq, were “militant groups” who “seized” the Democratic Party's presidential nominating process. “It’s really incredible and a sad process.”

Hillary Clinton is again seeking the presidential nomination in 2016. During the most recent controversy, she said, “I stand with Planned Parenthood” only days after  calling videos of Planned Parenthood officials harvesting fetal parts “disturbing.”

Clinton also hired a former Planned Parenthood employee to oversee her outreach to the Asian community.