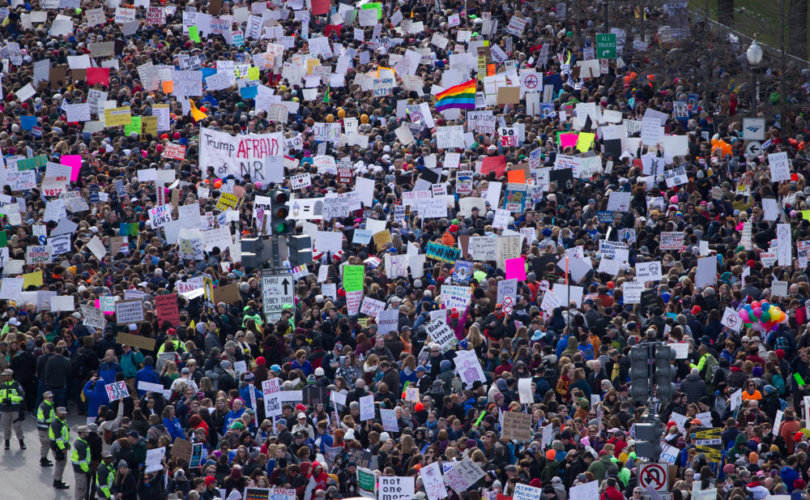 April 13, 2018 (Newsbusters) – It was a tale of two protests. After a school walkout against gun violence in March, students across the country organized a pro-life walkout in support of the unborn and pregnant and parenting students. But the networks only covered one of them.

On Wednesday, the three broadcast networks (ABC, CBS, NBC) never once mentioned the pro-life walkout during their news shows on the night of the event, April 11. In contrast, the same evening shows devoted more than 10 minutes to the gun walkout the day it happened. This comes after the networks covered the March for Our Lives 13 times more than the pro-life March for Life.

The walkout site listed 191 high schools and 81 colleges as participating. But according to a Tuesday statement from Kristan Hawkins, the president of Students for Life of America (SFLA), which helped organize the event, “more than 350 students and student group leaders from across the country have contacted Students for Life about their plans to stand with pregnant and parenting students.”

The site called for an end to abortion and the defunding of Planned Parenthood:

On Wednesday, April 11th, we will walk out of our classes for 17 minutes of silence and prayer. We will stand silently outside outside honoring the 10 children who will violently die during that time at a Planned Parenthood abortion facility … We will kneel and pray for the end of legal abortion in our nation.

In a statement to MRC Culture, Hawkins reacted to the discrepancy in coverage.

“No one is surprised that media bias is so obvious when it comes to abortion,” she began. “People who are passionate about the life issue, about mothers and their preborn infants, know that the media doesn't like to cover this human rights atrocity,” she added, pointing to coverage of the March for Life as an example. But that doesn't mean it was right, she added.

“It's still worth noting that the media went all in for the anti-gun walkout, talking about lives lost and free speech, while ignoring the #ProLifeWalkout, in which we mourn the fact that one-fourth of this generation has been lost to abortion, and students have a right to speak about that as well,” she continued.

While the gun walkout was larger, Hawkins stressed that it boasted more help from powerful outsiders, including the media.

“The Astroturf nature of the anti-gun walkout, with lots of money coming in from politically well-connected, national organizations and celebrities along with the media and school support definitely helped with their turnout,” she said. “Or at least it looked good on TV.”

For the walkout, her one request of the media was that they “cover it. Period.”

The networks didn't listen – for that walkout. But during their evening news shows on March 14, the same networks spent a combined spent 10 minutes, 14 seconds on the gun walkout the day it happened.

On March 14, NBC Nightly News anchor Lester Holt recognized the national school walkout's “unprecedented and powerful display.” From there, correspondent Gabe Gutierrez noted the “loudest lesson was outside the classroom” with the “17 minutes to honor the 17 victims” of the Parkland, Florida shooting. The network spent 4 minutes, 3 seconds on the walkout.

For CBS, anchor Jeff Glor introduced the segment on “walkouts across the country.” CBS Evening News spent 2 minutes, 46 seconds on the walkout – not including another segment on Nikolas Cruz appearing in court and other gun-related stories.

ABC anchor David Muir began World News Tonight with the “powerful images playing out across this country” with students “staging a massive coordinated protest against gun violence.” The network spent 3 minutes, 25 seconds on the story.

While the networks didn't cover the pro-life walkouts, supporters and participants posted their own stories on social media. During the #ProLifeWalkout, SFLA shared footage from high schools in California, Maryland, and New Mexico. Students also shared pictures and messages of the event on Twitter.

Like the gun walkout, high school students, such as Brandon Gillespie of Rocklin High School in California, led organizing for the #ProLifeWalkout after expressing concern over a double-standard on walkouts. Gillespie was inspired by Juliene Benzel, his history teacher, who was put on paid administrative leave after asking if the school would allow a pro-life walkout in the wake of the gun-control student walkout. In a Tuesday SFLA press release, Gillespie confirmed that his school refused to give the pro-life walkout the same support as the gun-control walkout.

“It just confirms for me that there is a political double standard, at least in my school district,” he added, “but I'm still going to be out there.”

In her statement to MRC Culture, Hawkins called on schools to listen to their students, after asked about potential critics who accuse pro-lifers of piggybacking onto a separate event.

“These walkouts were student initiated and student run,” she said. “The school opened the door to one group of protestors, and now can't close them to another. Equal respect must be given to students who are participating in an event that they chose.”

In the end, she said, the students still made a difference.

“No matter how many came out today, many students got to see their friends and peers stand for pregnant and parenting students and preborn infants,” she said. “That is going to make a difference in lives across the country.”

Methodology: MRC Culture watched the evening news shows from the three broadcast networks (ABC, CBS, NBC) on March 14, 2018, following the national school walkout, and on April 11, 2018, following the pro-life walkout. For the March 14 shows, MRC Culture counted gun-control news only if the networks placed it in and connected it to same segment as the walkout. Gun-control news reported in separate segments was not counted.