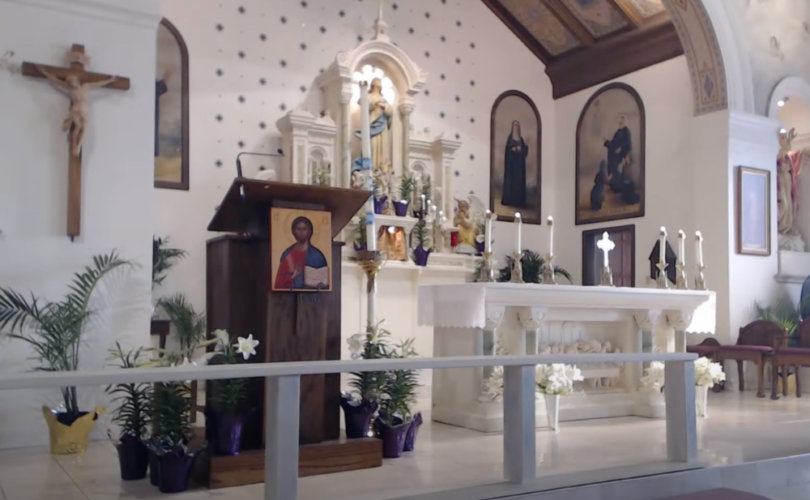 DENVER, Colorado (LifeSiteNews) – A Denver-area Catholic church was shot at by a gunman in two separate early morning attacks over the weekend.

A gunman fired shots at the Assumption of the Blessed Virgin Mary church in Denver last night pic.twitter.com/KRlIvoMwhK

During the morning hours of Saturday and Monday, a gunman shot at Assumption of the Blessed Virgin Mary Catholic Church near Denver, causing tens of thousands of dollars in damage, according to the Catholic News Agency (CNA).

“In the early morning of Aug. 6 and 8, there were two separate incidents of shootings that hit the front doors at Assumption Parish,” Deacon Derrick Johnson told CNA.

Johnson reported that security footage of the first attack showed “a single motorcyclist shooting what we believe to be a pistol as he drove by.”

According to photos of the church, the gunshots broke a window and damaged doors, and doorframes. A bullet hit and broke an outer window above a set of double doors, shattering the glass. Johnson estimated damage amounting to $75,000 as the bullets hit the church’s newly installed custom-fit doors.

“The first morning we discovered three shots, two into the door and one through the stained glass in the door,” Johnson said. “Two of the bullets were recovered and given to the Adams County sheriff.”

“On Monday morning, another bullet impact was discovered, this time above the doors, impacting the protective layer of the stained glass. The projectile was also given to the sheriff’s office,” he added.

“We are praying for the conversion of whoever did this,” Johnson recounted. “If there’s any opportunity to speak to that person, we’d be happy to speak with them and have a dialogue.”

Adjoining the parish is Assumption School, serving about 130 students in pre-K through eighth grade. While the students were not affected as school is out for the summer, Johnson declared that “the highest security precautions” will be taken for the school year.

Acts of vandalism and arson began escalating after news of the leaked draft report in May that could overturn Roe v. Wade. Pro-abortion radical group Jane’s Revenge has claimed responsibility for attacks against pro-life organizations and churches across America.

There have been over 60 documented attacks on pregnancy centers across the U.S. A Catholic advocacy group launched a map showing 200 attacks on Catholic churches since 2020, as anti-Catholic violence has increased.

Last month, pro-abortion activists defaced the doors of St. Bernard Catholic Church in Madison, Wisconsin as abortions ceased in the state after the reversal of Roe v. Wade.

Recently, Democrats unanimously voted to block a resolution condemning the ongoing violence against churches and pregnancy centers across the country.