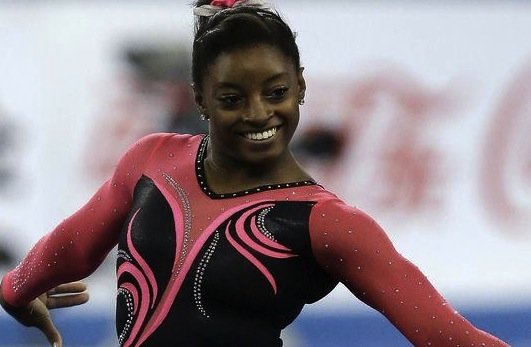 Simone is already the most decorated woman gymnast in her sport’s history, winning golds at the world level in all-around and individual events. But as the young daughter of a fatherless home who was shunted between a drug-addicted mother and foster homes, her chances of excelling in any sport let alone one so intense as gymnastics seemed slim indeed.

Then her grandparents, Ron and Nellie Biles, stepped in, took her and three siblings into their home and then adopted Simone and her sister, while Ron’s sister adopted her two brothers. Simone grew up in a family of achievers, who were also devout Catholics, not incidentally, according the social science findings showing strong correlation between family stability, regular and frequent church attendance, and success.

According to this week’s story in Independent Journal Review, “Little Girl Abandoned by Father and Drug-Addict Mother Is Adopted by Christian Texas Family, Becomes Best Athlete in the World,” her faith plays an important role in her life and success.

“Her parents,” reporter Benny Johnson wrote, “also introduced Simone to her Christian faith. She attends mass [sic] with her family every Sunday when she is not competing. Simone prays regularly and carries a rosary that her mother gave her.”

US Magazine has the details on the rosary, in a story on what Simone carries in her bag. “My mom, Nellie, got me a rosary at church. I don’t use it to pray before a competition. I’ll just pray normally to myself, but I have it there in case.”

Simone’s own innate talent and strong will are clearly crucial to her success. As Texas Monthly reports, when the girl came home from a day care field trip to a gymnastics school insisting on becoming its newest pupil, there was no denying her. “She’s always been headstrong,” said adoptive mother Nellie, the now-retired owner of a chain of nursing homes. “When she makes up her mind, it’s, like, oh, my gosh — the whole world could be upset and she’d still do it. My other kids would listen. Her, no. She makes her mind up and that’s it.”

Simone was six when she self-launched her gymnastics career, the same year Ron and Nellie adopted her and her sister Adria, and the two girls started calling them Dad and Mom.

Until then, the sisters called them Grandpa and Grandma. Then Nellie told the girls, “It’s up to you guys. If you want to, you can call us Mom and Dad.”

“I went upstairs,” Simone told the Texas Monthly, “and tried practicing it in the mirror — ‘Mom, Dad, Mom, Dad.’ Then I went downstairs, and she was in the kitchen. I looked up at her and I was like, ‘Mom?’ She said, ‘Yes!’ ”

Simone soon had a second mother in coach Aimee Boorman, who not only mentored Simone in gymnastics but babysat her and her sister when her father was out-of-state installing apparatus for the Federal Aviation Administration and her mother was away overseeing her nursing home network.

Completing the stability to which Simone returns when lands from her increasingly athletic and gravity-defying vaults and jumps is the family church, St. James the Apostle. Father Charles Semperi, the church's pastor, describes the Biles as “very faithful Catholics who are always at Mass.”

Father Semperi told LifeSiteNews that the family frequently asks for the congregation and priests to pray for Simone in her efforts both during Mass and privately. “She was very good in Confirmation class,” he recalls. The family now concentrates on supporting Simone and building a world-class gymnastics training facility called World Champions Centre in Spring.

The parish sent Simone off with a St. Sebastian medal. “I told her not to wear it during her events,” Fr. Charles joked, “in case it flies up in her face.”

As of Tuesday, Simone had qualified for the finals individually for all events in her field and was well on her way to winning as many as five medals, perhaps all gold.

Explains the IJR story, “Biles is able, with ease, to pull off moves other gymnasts could only dream about in a world seemingly unbound by the laws of gravity. Her routines and dismounts are so complex and so rarely seen in competition, several are named for her.”

Though already established as the best in the world, Biles will need an Olympic victory, the news media make clear, to ensure the 19-year-old becomes a multi-millionaire through endorsements, as if that was the point of sports, or of the Olympics, or of hers and her family’s 13-year effort.

Success could also bring family troubles, they warn, such as the possible re-emergence in her life of her natural mother, who lives in Columbus, Ohio, and has reportedly been clean from drugs for several years, or even of the father who disappeared virtually at birth. Teammate Gabby Douglas faced similar embarrassment at the hands of her long-absent father, who showed up after her Olympic victory in 2012 seeking her signature on various sports memorabilia he wanted to sell.

However, Simone’s adoptive parents and family have done their best to shield her from a preoccupation with such outcomes and focus her efforts on her sport, family life, and faith.

This supports the scientific research conducted or collected by the Washington D.C.-based Marriage and Religion Research Institute, which it summarizes on its website: “Regular attendance at religious services is linked to healthy, stable family life, strong marriages, and well-behaved children.

“Religious worship also leads to a reduction in the incidence of domestic abuse, crime, substance abuse, and addiction. In addition, religious practice can increase physical and mental health, longevity, and education attainment. These effects are intergenerational, as grandparents and parents pass on the benefits to the next generation.”