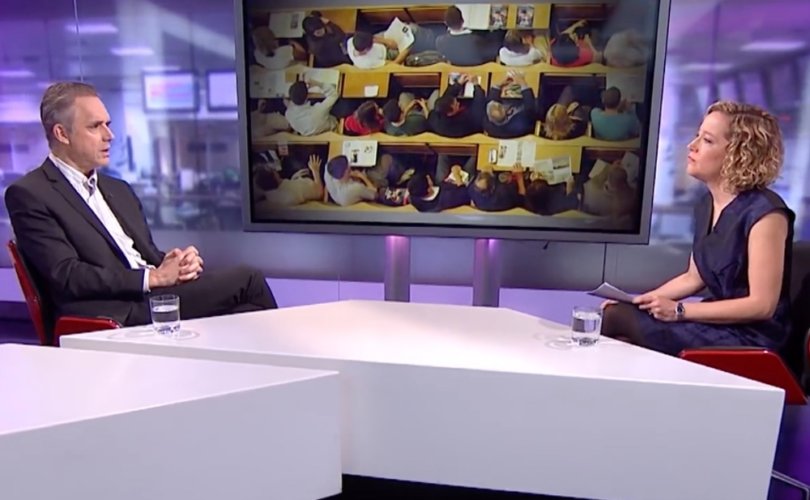 LONDON, January 24, 2018 (LifeSiteNews) – A leading intellectual who has become a kind of poster-boy for free speech cornered a left-wing interviewer with her own logic when she castigated him for offending people who say they are transgendered.

Dr. Jordan Peterson, clinical psychologist and professor at the University of Toronto, entranced viewers when he appeared on Britain’s Channel Four in an interview with Cathy Newman. The interview, in which Peterson’s measured, thoughtful responses make the overly combative Newman sound petty and ridiculous, has had over three million hits on Facebook.

At the climax of the debate, Newman addressed Peterson’s battle against speech codes that would force Canadians, by law, to use pronouns preferred by “transgender” activists.

“Why should your right to freedom of speech trump a trans person’s right not to be offended,” she demanded.

“Because in order to think, you have to risk being offensive,” said Peterson. “Look at the conversation we’re having right now. You’re certainly willing to risk offending me in the pursuit of truth. Why should you have the right to do that? It’s been rather uncomfortable.”

“But you get my point,” pressed Peterson. “You’re doing what you should do, which is digging a bit to see what the hell’s going on, and that is what you should do. You’re exercising your freedom of speech to certainly risk offending me. And that’s fine. More power to you, as far as I’m concerned.”

“But you haven’t sat there and–,” Newman began, and then fell silent. She dropped her gaze, and to the delight of many conservatives stammered, “I just, I’m just trying, I’m just trying to work that out.” She fell silent again as the camera captured her discomfort.

“You have got me,” Newman admitted.

Reactions to the interview have been mixed, with British conservatives chuckling over Newman’s worsting and liberals painting Peterson as “provocative”,  a hero of the “alt-right” and the leader of “an army of trolls”.

The response to the interview was overwhelming. So far there have been over 61,000 comments on its principal Facebook recording. Twitter erupted in a firestorm of reactions to the show, many of them highly unflattering to Newman.

The UK’s left-wing media went into action to wrest back the narrative that Peterson is a dangerous, rather than a highly intelligent and thoughtful, person. Newman was recast as a victim of the patriarchy, rather than an as a feisty interviewer who had met her match. The Guardian published a story saying that Channel Four had “called in security experts” over remarks about Newman, claiming that there had been “threats.”

After reading the Guardian story, Peterson tweeted: “If you’re threatening her, stop. Try to be civilized in your criticism. It was words. Words, people, words. Remember those?”

Peterson now regrets this, telling a reporter at the Dutch newsblog GeenStijl that his tweet was “instantly used as validation for the claim that there were threats.”

Just before he made his “white knight” move, Peterson told his Dutch interviewer, the professor had told himself that there was no evidence that these threats were credible.

“And if I respond by asking these people to back off,  I’m also implying that there are people who should back off, that this is real,” he thought.

But Peterson published his tweet anyway because Newman had been subject to a large number of “vitriolic comments,” and he thought that might be “okay,” that this might be enough reason for him to protest.

“But it wasn’t okay,” he said. “Because as soon as I did it, the fact that I did it was proof that all these claims were valid.”

“I was distraught,” he admitted.

When asked if threats were indeed made against the reporter, Peterson said, “There were no threats that were sufficient to get the police involved.”

Peterson is on a world tour promoting his new book 12 Rules for Life: An Antidote for Chaos. His battle against political correctness in Canadian universities has made him internationally famous.

Newman is known in the UK for her combative interviewing style. In April 2017, she grilled Tim Farron, then the leader of Britain’s Liberal Democrat Party, whether or not he believed homosexual sex was a sin. The relentless media scrutiny of Farron’s Christian beliefs led him to resign as leader of his party.