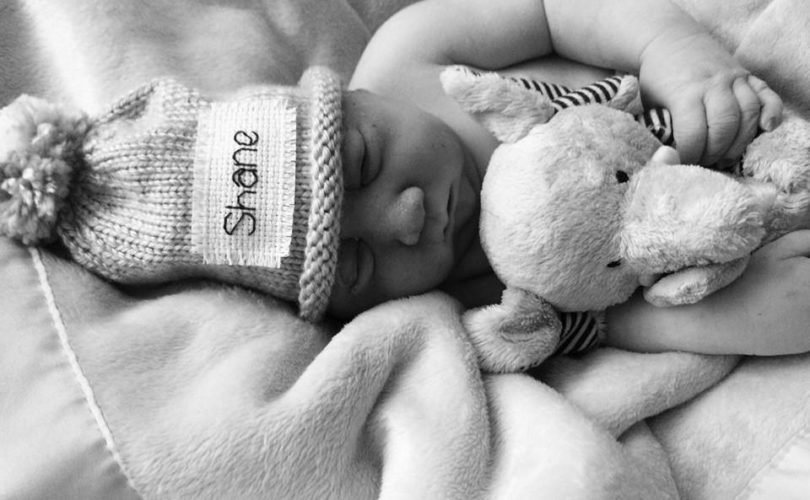 Just two days after the parents of “Baby Shane” welcomed their son into the world, and then said a tearful goodbye, a hacker took control of the viral Facebook page they had set up to chronicle their child’s brief life.

Thanks to the intervention of NBC Channel 10 in Philadelphia, and the swift reaction of Facebook, the Prayers for Shane page was restored in a matter of hours. But in the meantime the hacker wrought havoc, removing some of the couple’s photos, and posting sexually graphic content.

Nearly a million people have ‘liked’ the page, which was set up by Jenna Gassew and father Dan Haley to honor their son, who was diagnosed with anenchephaly in utero in his 13th week. Anencephaly is a condition that prevents the development of the skull and brain, and leads to death shortly after birth.

After the diagnosis the couple prayed for a miracle and shopped for a crib. But knowing that they may not have much time with him, they took Shane to a “bucket list” of places they believed he would never seen in this life: local attractions like an antique railway, national monuments like the Empire State Building, and sporting events like Philadelphia Phillies and Flyers games.

And in the process they chronicled their adventures on the Facebook page.

But what began as a way the staunchly Catholic couple could make the most of their child’s time with them and share it with their family and friends quickly became a viral phenomenon.

Last Thursday, only a little ahead of schedule, Shane was born. For too few hours he was the apple of his mother’s eye, cradled in her arms and in Dan’s, baptized into the Catholic  Church, and celebrated among hundreds of thousands of Facebook readers and followers of #shanesbucketlist on Twitter. He passed away hours later.

Then, on Saturday afternoon, the grieving mother received an email asking her to verify her Facebook account. “It looked legit,” she told NBC Channel 10, “so I typed in Dan's name and password.  And then they took control of Shane's page and took me out of being able to control it.”

The hacker proceeded to remove some of the family’s photos, and inserted sexual images. Jenna contacted Facebook, and tearfully told NBC, “I just need it fixed. It means everything to us. These are our memories.”

So NBC got on Facebook’s case too. In a few hours the offensive material was removed and the site back in Jenna’s control.

While the incident generated some negative commentary, Jenna’s own father restored the site’s positive spirit with a posting to her that read, in part, “I am amazed at the outpouring of Love and Warmth that the Facebook page has created. I think I understand what the purpose of starting this was; so that you, Dan and Shane can bring more awareness to anencephaly and to create memories that would last forever.

“But it has grown into something so much larger than that. It has become a conduit for millions of people to realize that while there is some bad in the world, the vast majority of people really want to Love and that Love makes us stronger.”