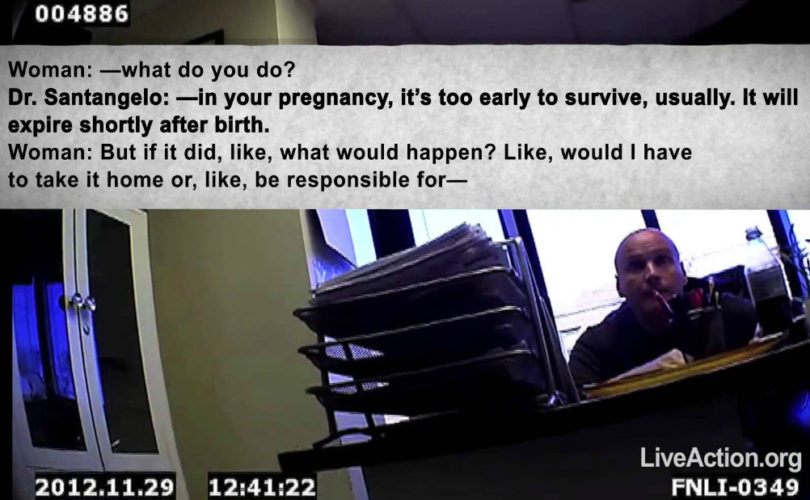 They may not receive much media coverage, but undercover investigations conducted by pro-life organizations have abortionists' full attention.

About half of the abortionists in a recent study are afraid of a reporter with a video camera showing up at their office, according to researchers at the University of Michigan.

“Though only 39 percent of those surveyed work in states where stings occurred, 48 percent fear being targeted by a sting, and 58 percent suspect they had encountered a fake patient,” lead author Emily J. Youatt, MPH, told the the American Public Health Association (APHA)'s 142nd Annual Meeting in New Orleans last month. “Nevertheless 93 percent report that they know what to do if faced with this situation.”

Youatt, who also has an undergraduate degree in Women’s Studies from the University of Kentucky and works in the University of Michigan's Women's Studies department, took an online survey of 311 abortionists at 22 “abortion care centers” nationwide.

The closer the investigations came, the more anxious abortion facility staff became. Abortionists in states that had experienced an expose were more likely to be concerned about their own exposure and less certain how to handle the fallout, she reported.

Investigations into the sordid side of abortion were presented as harmful to abortion boosters across the country. Youatt warned that investigators are “introducing a new stress to an already burdened workforce.”

Exposure by undercover reporters and other forms of “stigma” give abortionists “lower feelings of personal accomplishment.”

Youatt said that future research should address whether undercover sting operations have the “potential to burden patients by introducing suspicion into therapeutic clinical relationships.”

But pro-life investigators say the real reason they are coming under attack is simple: They expose the seamy underbelly of the abortion trade.

“Like any other criminal enterprise, the abortion industry doesn’t want people prying into what they are doing,” Mark Crutcher, the president of Life Dynamics, said.

Life Dynamics has played a role in exposing the industry. In 2002, it telephoned 813 abortion facilities affiliated with Planned Parenthood or the National Abortion Federation. A woman posing as a 13-year-old girl said her 22-year-old “boyfriend” had impregnated her and wanted her to abort before anyone found out. Crutcher said the number of abortion staff willing to cover up underage sexual assault startled him.

“Initially we thought perhaps the abortion clinics were only reporting half of the incidents, but instead we found that they were reporting hardly any of them,” Crutcher said.

Numerous stings have followed, by Crutcher's organization and others.

Live Action has filmed Planned Parenthood employees agreeing to cover up sex trafficking, statutory rape, sex-selective abortion, and late-term abortionists admitting they would do nothing to assist a baby born alive during a botched abortion – a violation of the Born-Alive Infants Protection Act signed by President George W. Bush in 2002.

Their “sting” operations have been supplemented by real life examples.

Dr. Ulrich “George” Klopfer has been criminally charged with failing to report abortions of 13-year-old girls in compliance with an Indiana state law designed to fight statutory rape. At least one of his patients' alleged abusers has been charged with child molestation.

The Guttmacher Institute, RH Reality Check, and NARAL have admitted sex-selective abortion is taking place in the United States.

Reviewing such investigations dispirited one of APHA's panelists, according to Medscape Medical News. Dr. Martin T. Donohoe, adjunct associate professor in the Department of Community Health at Portland State University in Oregon, said, “My sense, as a physician and teacher, is that this movement really needs a good PR campaign.”

At least one of the new survey's authors has a vested interest in the abortion industry's reputation. Dr. Lisa Harris wrote in May 2008 about performing an abortion at 18 weeks when she was approximately 18 weeks pregnant.

“I could see a small foot hanging from the teeth of my forceps. With a quick tug, I separated the leg. Precisely at that moment, I felt a kick – a fluttery 'thump, thump' in my own uterus. It was one of the first times I felt fetal movement,” she wrote. “There was a leg and foot in my forceps, and a 'thump, thump' in my abdomen. Instantly, tears were streaming from my eyes – without me – meaning my conscious brain – even being aware of what was going on.”

She, Youatt, and her fellow researchers have worked together on numerous surveys about the abortion industry.

Youatt co-authored a study published in September that found that 89 percent of surveyed abortionists “felt unappreciated by society,” yet 98 percent “took pride in their work.”

The team reported its findings that, “compared to other healthcare workers, abortion providers reported higher compassion satisfaction and lower burnout” levels. “Compassion satisfaction is about the pleasure you derive from being able to do your work,” explains ProQOL.org, an expert group that measures quality of life.

Youatt also has an interest in how “stigma” affects homosexuals.

Last September, Youatt led a study about lesbian smoking habits, concluding that “LGBT community connection as well as friendships with other sexual minorities as protective in relation to [lesbians'] smoking behaviors.”

Author Nadine Hubbs thanked Youatt for her assistance in honing the message of Hubbs' book Rednecks, Queers, and Country Music.

Caught on video: abortionist tells woman 24-week-old fetus ‘doesn’t even look like a baby yet’
No charges for abortionists caught on camera agreeing to illegal sex-selective abortions: UK
Abortion worker caught on video: if baby is born alive 'they do not resuscitate'