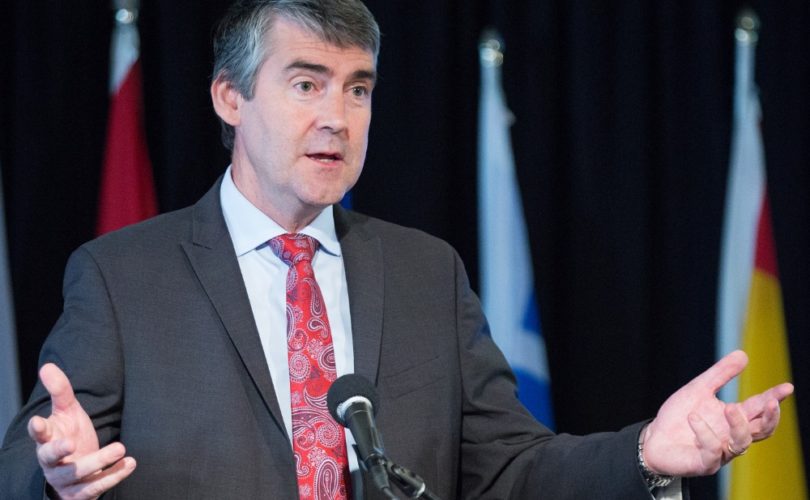 Nova Scotia’s Liberal premier, Stephen McNeil, is set to give the keynote speech on “faith and family” at the Catholic Archdiocese of Halifax-Yarmouth’s second annual Archbishop’s Dinner on September 25.

Though McNeil is a Catholic and the twelfth of 16 children, pro-life advocates are up in arms over his scheduled address because he publicly supports abortion and opposes Church teaching on homosexuality.

The chancery office promised an official statement on the controversy last week, but it has yet to be released.

Ellen Chesal, executive director of the Campaign Life Coalition Nova Scotia, is not holding fire. “It just doesn’t sit right,” she told LifeSiteNews. “He’s a good man, and a good father and a gentle man, but his position on abortion is not consistent with Catholic teaching. There are other good men and women, who also support Church teaching on life, the Archdiocese could invite to speak.”

Chesal has written Archbishop Anthony Mancini to explain that, “as pro-life people,” she and her husband “cannot attend.”

“It seems incongruous that while for Pope Francis, ‘it is horrific even to think that there are children, victims of abortion, who will never see the light of day,’ we in Halifax Yarmouth are honouring and promoting someone who is an active supporter of the rights of people to continue this ‘horror,’” she wrote.

In a September 19, 2013 tweet during the most recent provincial election that landed him in the premier’s office, McNeil wrote: “I support a woman's right to choose. A Liberal government would continue to protect that right in our province.”

In a July 26, 2014 tweet, he wrote: “Looking forward to the 27th Annual @HalifaxPrideParade today. Hope to see you there. #Halifax.”

Another pro-life activist who has written the archbishop is Julie Culshaw, author of the Concerned for Life blog.

After highlighting McNeil’s tweets, Culshaw writes: “No doubt an outstanding Catholic. Fully practising, practising his Catholic faith while separating his personal beliefs from his political stand. How many times have we seen this before?  A public figure who sacrifices his conscience for political gain.”

Catholic politicians who support abortion “rights” for the public while personally “opposing” the practice are a fixture of Canadian and American politics. Catholic Prime Ministers Jean Chretien and Paul Martin actively promoted access to abortion during years when Canada’s abortions topped 100,000.

However, Pope Benedict XVI declared numerous times before and after his election that pro-abortion Catholic politicians should be denied Communion, if they refuse to recant their position. While cardinal-prefect of the Congregation for the Doctrine of the Faith in 2004, he wrote:

Regarding the grave sin of abortion or euthanasia, when a person’s formal cooperation becomes manifest (understood, in the case of a Catholic politician, as his consistently campaigning and voting for permissive abortion and euthanasia laws), his Pastor should meet with him, instructing him about the Church’s teaching, informing him that he is not to present himself for Holy Communion until he brings to an end the objective situation of sin, and warning him that he will otherwise be denied the Eucharist.

A relevant document, though not specifically binding in Canada, is the United States Conference of Catholic Bishops’ statement “Catholics in Political Life,” where they addressed the problem of dealing with Catholic politicians who oppose Church teaching. The document states (emphasis in original):

Premier McNeil’s office did not respond to queries by press time.

Nova Scotia Liberal Premier: We tolerate pro-lifers in our party