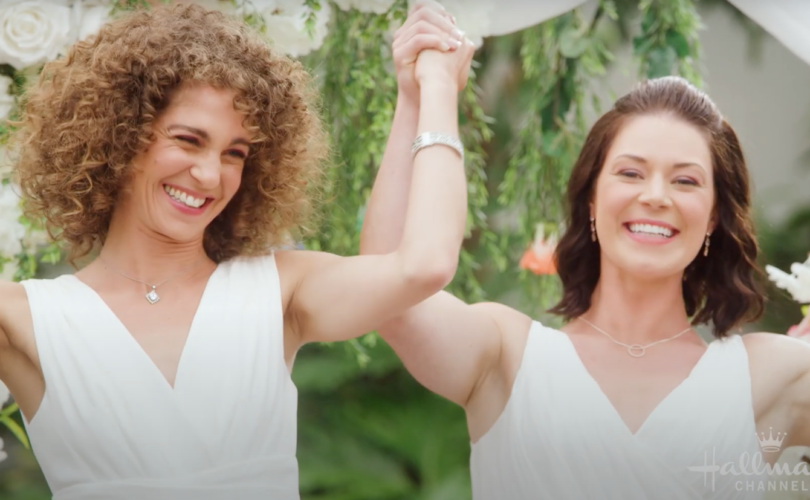 August 14, 2020 (LifeSiteNews) – After coming under attack, the Hallmark Channel has knuckled under to pressure from LGBT groups and will air its first original movie featuring a same-sex ‘wedding’ this weekend.

The movie, “Wedding Every Weekend,” centers on two single friends, Brooke and Nate, who discover they have both been invited to the same four weddings on consecutive weekends. One of those ‘weddings’ is for Amanda and Vicky, a lesbian couple.

“Diversity and inclusion is a top priority for us and we look forward to making some exciting programming announcements in the coming months, including announcements about projects featuring LGBTQ storylines, characters, and actors,” announced George Zaralidis, vice president of network program publicity for Hallmark's parent company, Crown Media Family Network, in July.

“We are committed to creating a Hallmark experience where everyone feels welcome,” Zaralidis added.

After some Hallmark fans complained about the inclusion of a same-sex wedding in the  about-to-be-aired movie, Hallmark doubled down, declaring, “We are proud of our movie, ‘Wedding Every Weekend.’ Our priority at Hallmark Channel is to develop a broad mix of content, characters and stories in order to create a Hallmark experience where everyone feels welcome.”

Among those blasting the Hallmark Channel for changing its programming policy is One Million Moms, which launched a petition asking the formerly wholesome entertainment  channel to refrain from adding LGBT content to its lineup.

“Such content goes against conservative values that are important to your primary audience,” warned the group, which strives to protect children from unwholesome influences in the entertainment industry.

“You will lose viewers if you cave to the LBGTQ agenda,” the group cautioned.

“So many people feel betrayed by Hallmark over these past seven months,” the group said. “Hallmark Channel was one of the remaining channels that families could watch without being bombarded by politically correct commercials and the LGBTQ agenda.”

So far, the One Million Moms petition has garnered more than 65,000 signatures.

In December, Bill Abbott, CEO of Hallmark parent Crown Media Family Networks (CMFN), claimed in an interview that Hallmark “differentiates itself from its competition” because its content is “relentlessly positive, family friendly, always appropriate for all members of the family.”

“Across the board, we’re attracting an audience across every demographic,” Abbott said.

In the past, Hallmark has stated, “We are not an issues-oriented network: our goal is for every viewer who comes to us to feel happier and better because they watched.”

That’s especially important during the holidays because Hallmark viewers skew younger than the rest of the year.

Abbott explained that viewers can feel comfortable watching Hallmark’s movies with their kids without having to worry about running for the remote because an inappropriate scene suddenly pops up.

Yet things changed after a dustup over a controversial commercial Hallmark had aired depicting a for the wedding planning service Zola, featuring a same-sex “wedding” that ended with two women kissing.

After first removing the offending ad, Hallmark reinstated it under pressure from LGBT groups and celebrities such as Ellen DeGeneres and William Shatner.

Despite having built a huge audience by providing a reliable, safe refuge for family viewing during an era when even Disney offers a minefield of pro-LGBT programming aimed at kids, the head of Hallmark’s parent company then changed his tune, indicating that “Hallmark is ‘open’ to doing any type of movie — including with gay leads.”

Abbott was asked, “Have you talked about incorporating stories about same-sex couples at Christmas?”

‘Diversity activists will never be satisfied’

The majority of TV viewers want “to watch entertainment that represents them or doesn't include a constant assault on morality and decency,” and so “they're relegated to one cheesy channel that plays nothing but sappy Christmas movies most of the year,” Fox continued. “But when the social justice soldiers get done with Hallmark, they won't even have that.”

“The sustained campaign against the Hallmark channel will work, as illustrated with the channel's CEO, Bill Abbot, signaling that they are open to gay stories,” Fox said.

Fox said she believes that “Hallmark is not interested in pleasing its base of ‘moms and grandmas’ and will instead try to please the outrage mob that doesn't watch their channel.”

Readers can click here to read, sign, and share LifeSiteNews’ petition urging Hallmark executives to “keep sex and sexual practices – including the promotion of homosexuality, transgenderism, etc. – out of your movies.”