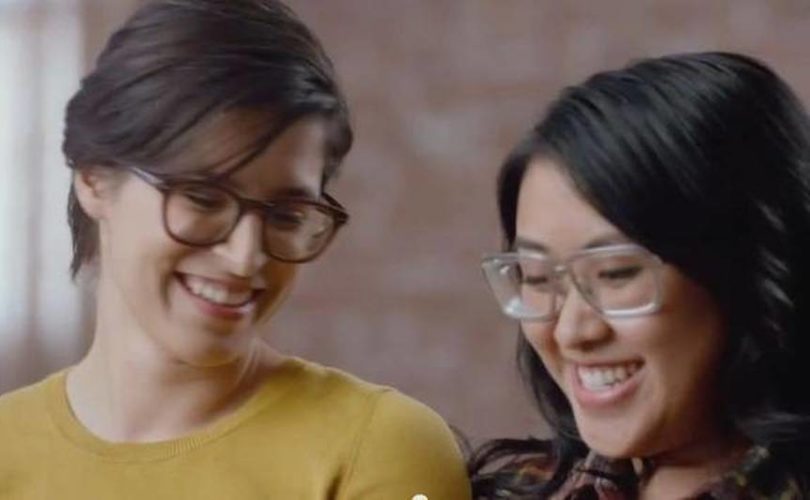 February 6, 2015 (LifeSiteNews.com) — Well known for being the first major US greeting card company to roll out same-sex wedding cards, this year Hallmark Cards is pushing its homosexual-friendly image with a commercial for its Valentine's Day cards that features a lesbian couple.

The “Put Your Heart to Paper” commercials for Valentine's Day consist of interviews with real couples who range from very young adult “Adam and Emily,” to “Bob and Kim,” a couple who has been married for 56 years.

In the staged interviews the couples are asked to express their feelings for each other without using the word “love.”

Among the interviews with the conventional couples is an interview with lesbians “Eugenia and Corinna.”

One of the two Hallmark Mother's Day cards marketed last year to children of lesbian parents says on the front, “Moms do it all and they do it with ease, from helping with homework to bandaging knees. They're coaches and confidantes, role models, too…whatever it takes they'll do. When it comes to big hearts, moms are second to none.” When opened, the inside text rhetorically asks, “How does anyone ever get by with just one?”

Hallmark's 2008 line of same-sex wedding cards was a marketing strategy to cash in on what they deemed was an “under-serviced market” after California joined Massachusetts in legalizing homosexual “marriage.”

Sarah Kolell, spokeswoman for Hallmark Cards, said at the time that the company wanted to be relevant to a market it was not addressing.

“It’s our goal to be as relevant as possible to as many people as we can. We have more than 200 cards to address traditional weddings, second weddings and interracial weddings,” Kolell told AP. “We heard that our customers wanted the cards, so we provided them.”

The four same-sex cards they marketed featured vague images such as two tuxedos, overlapping hearts, or intertwined flowers, and mundane phrases like  “one promise, two hearts,” but not the words wedding or marriage, making them suitable to be sold for civil unions or domestic partnerships, in the event that the California “gay marriage” law might be overturned in the November referendum.

Pro-family groups slammed the card maker, whose mission statement reads, “For over 100 years, Hallmark has believed in the very best of human nature,” for its same-sex wedding card push.

Wendy Wright, president of Concerned Women for America, said at the time, “Hallmark is jeopardizing its brand as a family-friendly company. Customers used to be able to trust Hallmark to produce quality products that were safe for all ages. Now parents will need to steer their kids from Hallmark’s section of the greeting card aisle and away from its previously heartwarming movies for fear that they too will push homosexual messages.”