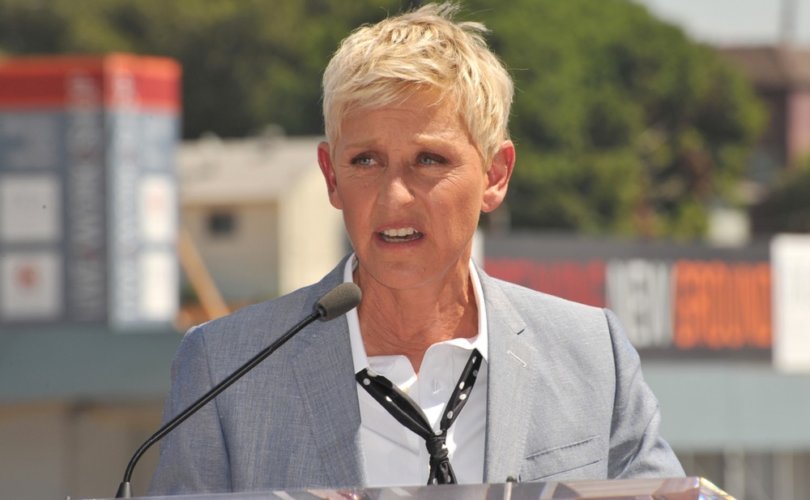 Ellen DeGeneres, one of the celebrities who criticized the Hallmark Channel's decision to pull pro-LGBT TV ads.Featureflash Photo Agency / Shutterstock.com

December 16, 2019 (LifeSiteNews) — The Hallmark Channel has reversed its decision to stop airing four commercials featuring same-sex “weddings” and will now allow the controversial adverts to be aired.

Hallmark initially decided to stop airing four commercials for the wedding planning website Zola.com after a backlash from viewers. The ad that sparked the backlash ended with two women, one in a white suit and the other in a white dress, kissing. The other ads that were pulled also featured same-sex kisses.

But on Sunday, Hallmark announced that pulling the ads was the “wrong decision” after the channel came in for criticism from several celebrities.

Shatner initially wrote, “Shame on @hallmarkchannel! Put the commercials back! @1milmoms has 4K followers. I have 2.5 million and my friends have more. Who are you going to listen to? They are NOT a majority here. Both me and my followers watch your shows, do they?  #loveislove Do the right thing.”

Shame on @hallmarkchannel! ��Put the commercials back! @1milmoms has 4K followers. I have 2.5 million and my friends have more. Who are you going to listen to? They are NOT a majority here. Both me and my followers watch your shows, do they? ����‍♂️ #loveislove Do the right thing. https://t.co/Af4UWf59xi

Ellen DeGeneres, who has almost 80 million followers on Twitter, wrote, “Isn’t it almost 2020? @hallmarkchannel, @billabbottHC… what are you thinking? Please explain. We’re all ears.”

Isn’t it almost 2020? @hallmarkchannel, @billabbottHC… what are you thinking? Please explain. We’re all ears.

According to a report at ABC News, the decision was also mocked on Saturday Night Live, and the Netflix U.S. Twitter account posted an image of two lesbian couples along with the caption “Titles Featuring Lesbians Joyfully Existing And Also It’s Christmas Can We Just Let People Love Who [sic] They Love.”

On Sunday evening, Hallmark Cards president and CEO Mike Perry announced that the commercials would be allowed to air once more. “The Crown Media team has been agonizing over this decision as we’ve seen the hurt it has unintentionally caused,” he said. “Said simply, they believe this was the wrong decision[.] … We are truly sorry for the hurt and disappointment this has caused.”

One Million Moms (1MM), a conservative group whose goal is to “stop the exploitation of our children, especially by the entertainment media,” last week asked Hallmark to pull the ad after collecting comments from viewers about how the commercial “ruined” their experience watching the “family friendly” channel. 1MM subsequently announced that it had spoken with Bill Abbott, the CEO of Hallmark’s parent company, Crown Media Family Networks, “who confirmed [the] Hallmark Channel has pulled the Zola.com commercial, featuring a same-sex couple, from their network. He reported the advertisement aired in error, but he was informed about it after hearing from concerned 1MM supporters.”

“The call to our office gave us the opportunity to also confirm the Hallmark Channel will continue to be a safe and family friendly network. Praise the Lord!” 1MM announced.

The complaint led to the channel making public statements as to why it was not appropriate for them to air the ads. “The debate surrounding these commercials on all sides was distracting from the purpose of our network, which is to provide entertainment value,” Crown Family Media Network said in a Friday evening statement, as reported by the New York Times. That outlet reported that similar ads of heterosexual couples were deemed appropriate for the channel.

“We are not allowed to accept creatives that are deemed controversial,” a Hallmark account representative told Zola via email.

But that position was quickly abandoned. Curiously, Hallmark Cards head Mike Perry used similar wording in his statement apologizing for the ads being pulled as was used by the organization when the ads were initially canceled.

“Our mission is rooted in helping all people connect, celebrate traditions, and be inspired to capture meaningful moments in their lives. Anything that distracts from this purpose is not who we are,” he said in a statement reported by CNBC.

One Million Moms told LifeSiteNews today that it is “extremely disappointed that the Hallmark Channel caved under pressure.”

“This is an enormous mistake that will cause many viewers to change the channel. We continue to urge the Hallmark Channel to return to the family-friendly content it has always been known for. The issue of same-sex relationships should be left for families to talk through together according to their faith and personal beliefs, rather than be forced to address this complex matter during family movies,” the group said.

Molly Biwer, senior vice president for public affairs at Hallmark, said in an interview on Sunday night that the most recent decision to allow the ads to be aired “truly reflects who we are as a company. We celebrate all families.”

In November, Bill Abbott suggested that the channel may begin to feature homosexual story lines.

“We’re open to really any type of movie of any type of relationship,” he told The Hollywood Reporter’s podcast.

LifeSite is calling on Hallmark to stand by its original decision to pull the ads and deliver genuinely family-friendly entertainment to its viewers this Christmas.