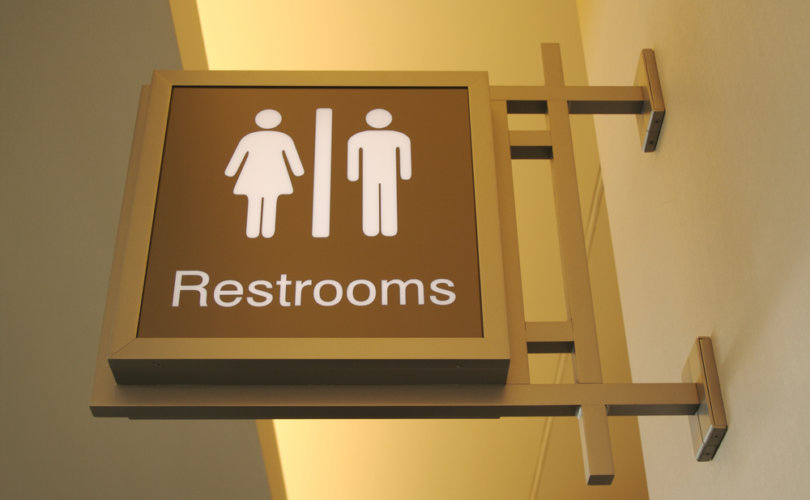 HAMILTON, Ontario, May 3, 2016 (LifeSiteNews) – The City of Hamilton has apologized that a security guard insisted a person who looked like a male use, first, the men’s, and then the family washroom at the MacNab Bus Terminal last year, despite his insistence he self-identified as female.

But the man in question, identified as “A.B.” in the subsequent flurry of communications amongst the city, its bus system named the Hamilton Street Railway, and the Ontario Human Rights Commission, wasn’t happy to be denied the women’s washroom, and was reportedly “left in tears.”

Although the city immediately apologized, as did the guard, and committed to the principle that people can use the washroom appropriate to their “self-identity,” A.B. complained to the OHRC, which took the last 12 months to work out just how the city would prevent a reoccurrence.

As part of the settlement just reached with A.B. the city has committed to the policy that transgender people can use whatever washroom they want regardless of what or who they look like and regardless of “the preferences or negative attitudes of others.” They also committed to “codify” this in policy and  “train its employees” in it.

The initial incident arose because A.B. did not look anything like the woman he claimed he wished he were. The guard, reportedly to “balance the rights of all,” therefore stopped him at the door of the women’s washroom. When A.B. informed the guard of his rights, the guard then steered the trans person towards the “accessible” or family washroom provided to allow parents to manage their children’s toilet activities in private.

Though A.B.’s name has never been revealed, Jennifer Ramsey of the Human Rights Advocacy Centre told LifeSiteNews, “She was very, very humiliated” by the experience. Nonetheless, A.B. never sought financial damages, but merely a commitment from Hamilton to change its behavior. “We are very pleased with the result,” Ramsey added.

From A.B. came this statement: “Taking legal action doesn’t make the pain go away. But I hope employees will be more aware and respectful in the future.”

Not everyone is applauding the results. Gwen Landolt, the national vice president of REAL Women of Canada, told LifeSiteNews, “She should have just used the family washroom. All she’s trying to do by using the women’s is to promote a legal challenge” to advance the transgender agenda.

Landolt said, “Women and girls are vulnerable to men in washrooms, who could cause violence and do cause embarrassment.” The issue, she says, exposes “the hypocrisy of the politically correct,” who shut down pro-life activities on college campuses because they infringe on “safe spaces” but care nothing for the safety of women and children.