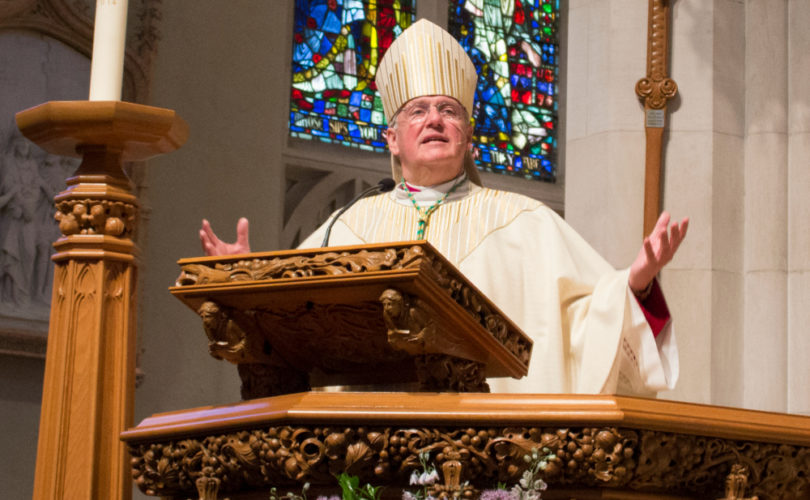 KITCHENER, Ontario, April 20, 2015 (LifeSiteNews.com) – The Catholic Diocese of Hamilton has banned from a Kitchener parish a speaker from Campaign Life Coalition scheduled to talk about the Ontario government’s controversial sex education curriculum.

Officials at the Diocese of Hamilton told LifeSiteNews that the talk was canceled because it was “really premature.”

“The Catholic version of the health and physical education curriculum has not yet been published,” said Monsignor Murray Kroetsch. “So it is rather pointless to have a presentation on something that doesn’t exist. That’s the bottom line.”

A non-denominational group, Family Life Concerned Citizens, took over sponsorship of the event, moving it to a nearby hotel. One of the organizers of FLCC, Kitchener Catholic parent of three Rob Langlade, told LifeSiteNews that the curriculum “violated our values” by normalizing abnormal and pre-marital sexual relations.

The speaker, Jack Fonseca, has already addressed Muslims, Baptists, Christian Reformed, and a Sikh-Hindu mixed group of parents about the sex education curriculum. “I have more requests to speak than I can handle,” he told LifeSiteNews, “and so do about 10 other people prepared to speak about the curriculum. Parental interest in this is huge.”

Gordon Belyea, pastor of the Bowmanville Baptist Church, said his church has invited Fonseca to speak after hearing him talk to another congregation. “What he had to say was pretty graphic but that is just calling a spade a spade because the curriculum itself is graphic.”

But Msgr. Kroetsch told LifeSiteNews the bishops were “very confident” that they could rewrite the curriculum in a way that was compatible with Catholic teaching. “The government has given every indication they are willing to work with the bishops and they are giving the bishops the opportunity to develop the health and physical education curriculum in such a way that it respect[s] the values and truths we respect as Catholics.”

Indeed, Cardinal Thomas Collins of Toronto issued a statement for the Ontario Catholic Bishops Conference in February assuring that “a group of Catholic educators will produce resources that support Catholic teachers so that the new curriculum is implemented in a way that is consistent with our Catholic teachings and appropriate within the context of a Catholic classroom.” The “group” is the controversial Institute for Catholic Education (ICE).

Fonseca is respectfully skeptical. “I think the bishops are being very naive. How could they have not seen how the Ontario government has repeatedly passed school legislation that has violated Catholic teaching?” He cited Bill 13, which “forces Gay Pride and transgendered clubs on Catholic schools.” As well, he described ICE as a “dissident” group that “already approved the sex ed curriculum in 2010, without a single objection according to [then Premier] Dalton McGuinty. ICE has been an unmitigated disaster.”

Fonseca also said that the curriculum’s support of “gender theory” with its concept of six genders among which students should be allowed to switch as their self-concepts change “is totally incompatible with Christian anthropology about the human person, which holds that God made us male and female. I don’t see how the bishops can possibly strap a Catholic lens onto that.”

Fonseca also argued that “even if the bishops can revise the sex ed curriculum in a way that protects students in Catholic schools, they still have a duty to all Ontario parents—Muslims, Sikhs, Protestants and Catholics with children in the public system–to protect their children too.”

Among worried Catholics are Robert Langlade and his wife. “Me and my wife are talking about pulling our children from the school system,” he told LifeSiteNews. They object to “gender theory” in particular, as well the teaching of “the concept of consent to 11 or 12-year-olds.” He added, “It’s not the government’s role to usurp my role as parent.”

But they are also offended by how “the curriculum has been rammed down our throats.” Langlade said that the government tried the same thing in 2010 with an earlier version of the same curriculum, but when parents across Ontario protested it was withdrawn. “This time they don’t want to listen.” He said he had written his MPP “four or five times” but received no response other than a form letter.

“What’s the harm,” asked Fonseca, “in allowing Catholic parents to learn about the government curriculum? Why would the Hamilton diocese ban Campaign Life Coalition when they let a laicised priest and outspoken critic of Church teaching, Professor Thomas Groome, speak to 4,000 Catholic teachers [in November 2013]?”