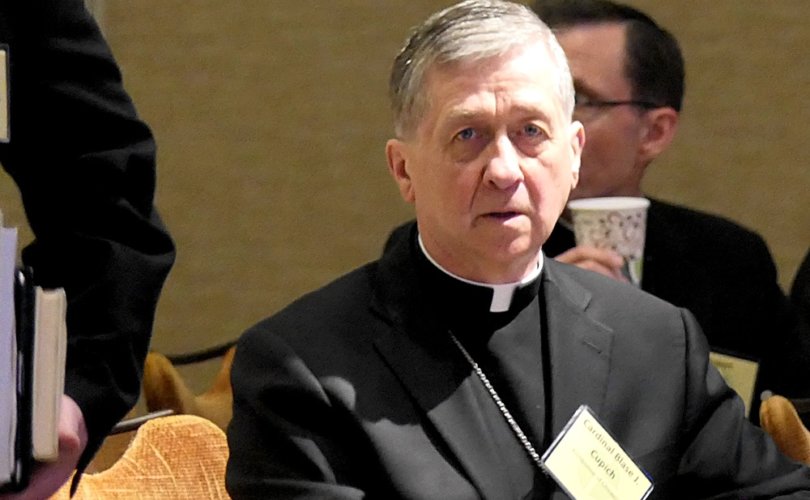 To help Father James Altman in his fight for the Faith, click here.

CHICAGO, Illinois (LifeSiteNews) – After the distribution of Holy Communion to pro-abortion, pro-LGBT Chicago Mayor Lori Lightfoot under the watch of Cardinal Blaise Cupich, the Coalition for Canceled Priests (CFCP) is hosting today a Rally and Rosary of Reparation to make amends for the scandal.

The CFCP is inviting faithful Catholics to “support canceled priests who seek to return to active ministry after being unjustly canceled by their bishops” by joining their rally and rosary event on September 10 at Lincoln Park in Chicago. The rally will be headlined by speeches from Jason Jones, Father James Altman, a “special surprise guest,” and others.

LifeSiteNews will be live-streaming this event at 1 PM EST on our Rumble channel, and will have a video report released in the coming days. The stream can be watched below, or on LifeSite’s Rumble here.

CFCP was established in the spring of 2021 in response to “one too many instances of persecution or betrayal” against faithful priests, the organization’s website reads.

The group confirms “the Catholic Church’s traditional teachings on faith and morals” and acknowledges that “the Catholic Church has had, since its founding by our Lord and Savior Jesus Christ, a universal mission to bring each individual to sanctity and ultimate salvation.”

As part of that “universal mission,” the CFCP notes that all Catholic priests have the “responsibility to preach and practice traditional Catholic morality.”

But the group claims that the Church hierarchy has failed to uphold this standard, instead noting that bishops are now persecuting their priests for preaching the simple, age-old truths of the Catholic faith.

In addition to supporting canceled priests, Friday’s prayerful event, open to clerics and laity alike, is also intended as a reparation for Cupich, who recently permitted Lightfoot, a non-Catholic and active homosexual, to receive the Eucharist at a Mass celebrated by the cardinal.

The U.S. Catholic Conference of Bishops’ website states that since “Catholics believe that the celebration of the Eucharist is a sign of the reality of the oneness of faith, life, and worship, members of those churches with whom we are not yet fully united are ordinarily not admitted to Holy Communion.”

Lightfoot is a member of St. James AME Zion Church, an African Methodist Episcopalian Zion church, and therefore is not in union with Rome. She also identifies as a lesbian and is open about her same-sex “marriage” to Amy Eshleman. The pair share a 10-year-old daughter.

By allowing Lightfoot and other “grave manifest sinners” to receive Holy Communion, the CFCP said that Cupich has caused “confusion and scandal to the laity.”

The rally is designed to “foster awareness, advocacy, and action among the laity” to support the country’s faithful priests who have been silenced by wayward bishops. The event will feature a number of speakers, including Father James Altman, whose bishop, William Callahan of La Crosse, Wisconsin, removed him from active ministry at the parish of St. James the Lesser, as well as suspending his priestly faculties indefinitely in the months following his criticism of the U.S. bishops’ closure of churches during COVID-19.

Callahan claimed his decision was based on Altman’s becoming “divisive and ineffective.”

Altman will be joined by David L. Gray, a Catholic theologian and expert on Freemasonry, and pro-life activist and filmmaker Jason Jones, among others. For more information, click here.