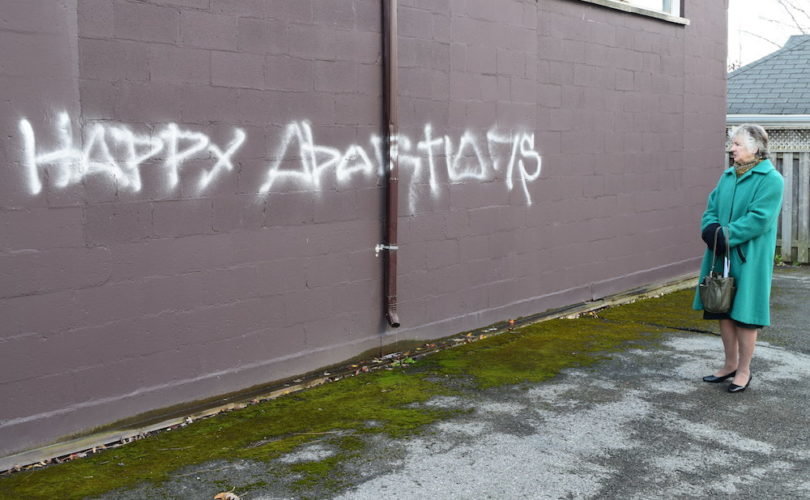 Not only is he puzzled why someone would spray an anti-Catholic obscenity on the rectory’s garage door, as well as “Happy abortions” on the side of the adjacent church hall, where Welland Port Colborne Pro-Life association has an office; but he also wonders why the church was vandalized sometime between Wednesday evening, when he came home, and Thursday morning, when the secretary discovered the graffiti.

“I can’t understand, because this was one of the worst nights we ever had,” Fenech Gonzi told LifeSiteNews, adding that it was a night of driving rain and gale-force winds. “In fact, you can see it in the graffiti. It’s not that clear-cut line, it’s spread.”

“I just don’t understand how somebody could come out just for that.”

Muriel Dyson, volunteer community liaison for Welland Port Colborne Pro-Life, was also baffled by the incident, because, she said, the graffiti can’t be seen from the main road.

“I think there was somebody with nothing better to do who just decided they’d do something,” she told LifeSiteNews.

She was also shocked. “This has never happened before,” she said. The only similar event Dyson could recall, happened about two years ago, when a group of about six “young girls” harassed the Welland pro-lifers during their annual march to the local hospital.

“They were in the park where we meet, and they were screaming, with bullhorns,” Dyson said. “I went up to one of them, I went as close as I could get, and I’m trying to say, ‘Can I talk to you please?’ but she’s screaming in my face. I won’t forget that.”

The protesters followed the pro-lifers to the hospital, and then back to the office, where Dyson diffused their hostility by inviting them to use the bathroom if they wanted. Shortly after, they left, and the pro-lifers continued the last leg of the march “in peace.”

Fr. Fenech Gonzi also said that in the fourteen months he’s been pastor at St. Mary’s, he’s never encountered anything like this.

He responded by calling the Niagara Regional Police, and the reporter for the Welland Tribune, who reported that the police said it was doubtful that the perpetrator would be caught, and that they were asking people to call them if they saw anything suspicious.

The whole thing is an aggravation, he says.

The graffiti on the side of the hall can be cleaned off and the wall repainted, but he’s still unsure what to do about the garage door, and says he’s not sure it will be all cleaned off before the weekend Masses.

“It’s very sad,” he said. “We encourage people to try to live and let live,” but that sentiment “doesn’t seem to exist anymore.”

“If somebody stole something and they need to buy food, or even they wanted to buy booze, or something, I could understand it, but to do something like this?” asked Fenech Gonzi. “What did they achieve? What did they gain? Absolutely nothing.”