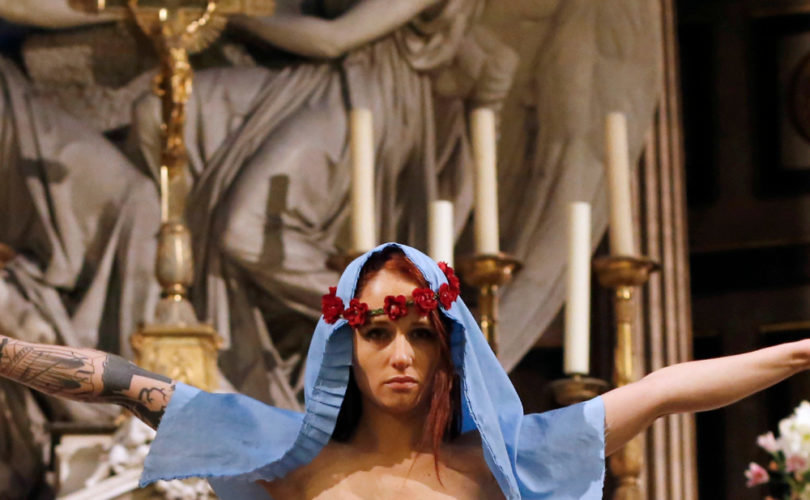 Femen activist Eloise Bouton protests in front of the altar at the Church of the Madeleine on December 20, 2013.

The topless “Femen” activist who desecrated the Parisian church of the Madeleine days before Christmas last year was given a one-month suspended prison sentence for “sexual exhibitionism” on Wednesday by a penal tribunal in Paris.

Eloise Bouton, 31, made the headlines on December 20, 2013, when she burst into the choir of the church half-naked, shouting “Christmas is canceled,” bearing the same inscription on her back and the words “344e salope” (344th b****) on her chest.

These words refer to a famous manifesto published in 1971 by 343 women, mostly intellectuals, actresses and political activists, in the left-wing magazine Nouvel Observateur, in which they claimed to have had an illegal abortion and demanded the legalization of abortion. This was to take place four years later, in December 1974.

Wearing a blue veil reminiscent of the Virgin Mary and a crown of red flowers, Bouton posed for several minutes in front of the church’s main altar, brandishing two pieces of beef liver symbolizing an aborted child. Days later, she published an article – again in the Nouvel Observateur – in which she called the pieces of liver “symbols of the aborted infant Jesus” and said she “left the bloody holy fetus at the foot of the altar.”

She was accompanied all the while by journalists and photographers from various media, including the major news agency Agence France-Presse.

The story received major news coverage but few official condemnations were forthcoming apart from that of the then-mayor of Paris, Bertrand Delanoë — in stark contrast to what happens when a mosque faces similar attacks. The cardinal of Paris, Mgr Andre Vingt-Trois, himself underscored the fact that the minister of the Interior did not condemn the act or express sympathy to the Catholic community.

At the time Bouton was taken into custody for several hours. Her trial took place a few weeks ago. The public prosecutor demanded a 1,500-euro fine and a three to four months suspended prison sentence. The much more lenient sentence of one-month suspended is not uncommon for a delinquent who has never committed an offense before, but in the case of Bouton, who left the Femen activist group at the beginning of this year, it was in fact a very light condemnation as she is not planning on continuing her activism. Suspended sentences are executed only in the case of a repeat offense.

Eloise Bouton participated in the aggression against a demonstration opposing same-sex “marriage” in November 2012 and is being prosecuted by the French Christian defense league AGRIF, but that affair is still pending and will not count as a repeat offense. She also took part in the invasion of the Notre-Dame Cathedral in Paris in February last year by nine topless “Femen” women. The nine activists were discharged while the attendants of Notre Dame were condemned for “violence” against the women in steering them out of the church.  A separate procedure has been launched by the AGRIF in that affair and is also pending.

Prosecution against Bouton in the Madeleine affair, initiated by that church’s parish priest, only targeted “sexual exhibition,” and not the obvious offenses of “injury” and “hate crime” against Christians as such.

Bouton said she was “hallucinated” by the criminal conviction and will appeal the sentence.

On Thursday, less than 24 hours after the sentence was handed down, another topless Femen activist entered into the Madeleine in “retaliation.” Like Bouton, she wore a blue veil and a crown of red flowers, with the words “345e salope” (345th b****), brandishing a penal code and demanding the law on exhibitionism be changed to allow for “political” undressing.

Femen’s self-proclaimed fight for abortion “rights” in France is somewhat bizarre as abortion is available on demand, fully state-funded, and has recently been proclaimed a “fundamental right” by the French Assembly. Their demands are totally “mainstream” and apart from the Catholic community, their methods inspire little indignation, especially in the media. They are regularly interviewed in the press, and their figurehead in France, Inna Schevshenko, served as a model for the symbol of the French Republic, “Marianne”, on the definitive stamp of the French Post.