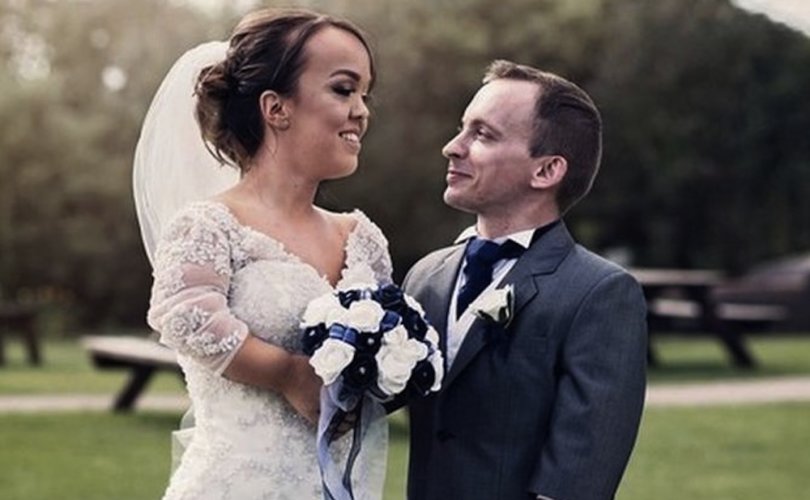 September 26, 2016 (LifeSiteNews) — Although doctors advised his mother to abort him and he was not expected to survive more than a few hours, 2 1/2-year-old Nathan Phillips was the ring-bearer at his parents’ “fairy-tale” wedding this month.

Now a healthy toddler who doctors say has no reason not to live a life typical of any child his age, Nathan Jr. is the only “double dwarf” in the UK, according to the Daily Express.

He was born with both the anachondaplasia form of dwarfism of his mother, Laura Whitfield, who is 4 feet 2, and the pseudochondaplasia of his father, Nathan Phillips, who is 3-11.

The couple met in 2012 on the set of a pantomime of Snow White and the Seven Dwarfs in Bath, in which the 37-year-old Phillips “was playing Grumpy and I was playing Dopey,” the 26-year-old Whitfield told the Express.

“It was amazing because it was the perfect fairy-tale start to our life together — now we are married and the wedding was simply magical.”

After Whitfield got pregnant in April 2013, she had weekly “scans” to detect any medical complications, and irregularities were discovered when Nathan Jr. was about 24 weeks weeks’ gestation, she told the Daily Mail in 2014.

The doctors “noticed that his measurements weren’t quite what they should be,” she said then. “‘They thought that he had inherited two rare genes that could have been dangerous.”

Whitfield was “told to consider abortion and told that if he had these genes he would probably die within half an hour of birth,” she said.

“I didn’t even think about abortion at any point — I don’t believe in abortion. I could feel him moving around inside me — he was a little wriggler. In my head, everything was fine.”

She also braced herself for the worst before delivering Nathan by C-section under general anaesthetic.

“When I woke up, Nathan was stood next to me with little Nathan in a cot. I couldn’t believe it — I just cried.”

The couple waited to get married “so that little Nathan could be old enough to carry the rings, but in the end the cushion was too heavy for him,” the newly wedded Mrs. Phillips told the Express. “He decided he didn’t want to carry it anymore and he threw it to the side.”

An actress and entertainer, Mrs. Phillips has appeared in Harry Potter films, and it seems that Nathan has inherited a flair for drama.

“It was quite funny and it was really special for us to have him there – he just loves to steal the show,” she said.

Mrs. Phillips added, “I know that people doubt us because we are little, but we are just like everyone else — the only thing that is different is our height.”