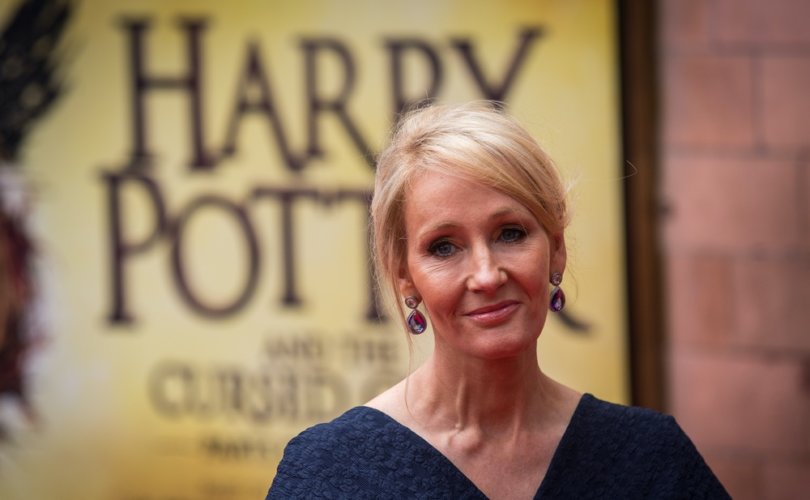 December 23, 2019 (LifeSiteNews) – Controversy continues over J.K. Rowling’s defense of a researcher who lost her job due to tweets critical of transgender theory, with the Harry Potter author so far refusing to give in.

Maya Forstater was a visiting fellow at the London-based economic think tank Centre for Global Development (CGD), which declined to renew her contract in March over tweets in which she declared that “men cannot change into women,” and that government should not recognize self-identifications to the contrary. Her tweets were determined to contain “offensive and exclusionary language,” with an employment judge recently rejecting her appeal of the case.

On December 19, Rowling tweeted in defense of Forstater, calling for general respect and deference toward “transgender” individuals while drawing the line at “forc[ing] women out of their jobs for stating that sex is real”:

Dress however you please.
Call yourself whatever you like.
Sleep with any consenting adult who’ll have you.
Live your best life in peace and security.
But force women out of their jobs for stating that sex is real? #IStandWithMaya #ThisIsNotADrill

Her remarks were met with intense condemnation from the pro-LGBT lobby and its allies, from countless angry Twitter replies to condemnatory articles in major publications.

“As a devoted Harry Potter fan who also happens to be transgender, it was like a punch in the gut,” Jackson Bird wrote in the New York Times. “It was this community of loving, passionate people who accepted me with open arms when I came out as transgender at the age of 25…I wonder now if I’ll be able to separate the author from the text, if and when I decide to read the books again.”

At Vox, Aja Romano lamented that Rowling’s “transphobic BS” has “ruined Harry Potter” just in time for Christmas with her “shocking dismissal of transgender identity.”

Some prominent figures have stood up to defend Rowling, however. In a series of tweets, Golden Globes host Ricky Gervais assailed LGBT activists for running roughshod over the interests of actual women and trading debate for outrage:

Exactly. We need to protect the rights of women. Not erode them because some men have found a new cunning way to dominate and demonise an entire sex.

That wasn't my point. In my original tweet where I said 'men', I wasn't referring to real trans women. I was referring to cis men exploiting self ID to get into women's spaces.

They don't want to argue. They can't afford to have their propositions questioned. They want to create a dogma with its own blasphemy laws and the “fatwah” of labelling people bigots to shut them down, ostracise them and even have them fired.

It used to be considered reasonable to listen & try to understand both sides of an argument. But now, if opposing extremists are screaming at each other & you don’t agree 100% with either, you’re considered the enemy of both. It’s why many people are afraid to contribute at all.

Sharron Davies, a former Olympics swimming medalist and critic of the transgender lobby’s efforts to break down biological barriers in athletics, retweeted Rowling’s tweet and expressed her own support for Forstater, as did talkRADIO Breakfast Show presenter Julia Hartley-Brewer:

The Sex we are Is a biological reality. A scientific fact. Where as Gender today is a social construct, an ideology, a feeling, totally changeable. I believe we cannot change sex but can Live happily expressing ourselves outside of any stereotypes. #IStandWithMaya #sexnotgender

Thank you for doing this.

So far, Rowling has yet to retract or apologize for her comments. Variety reports that the LGBT lobbying group GLAAD, which claimed that her tweet “puts trans people at risk,” privately reached out to Rowling in hopes of arranging a private conversation about the dispute. Rowling’s representatives declined.

Despite finding herself aligned with conservatives and traditionalists on this particular issue, Rowling is a doctrinaire liberal who in the past has made clear her support for abortion and homosexuality and disapproval of U.S. President Donald Trump. She recently said the Harry Potter villain Lord Voldemort is “kind of a nationalist,” a label associated with Trump in the U.S. and Brexit supporters in the United Kingdom.