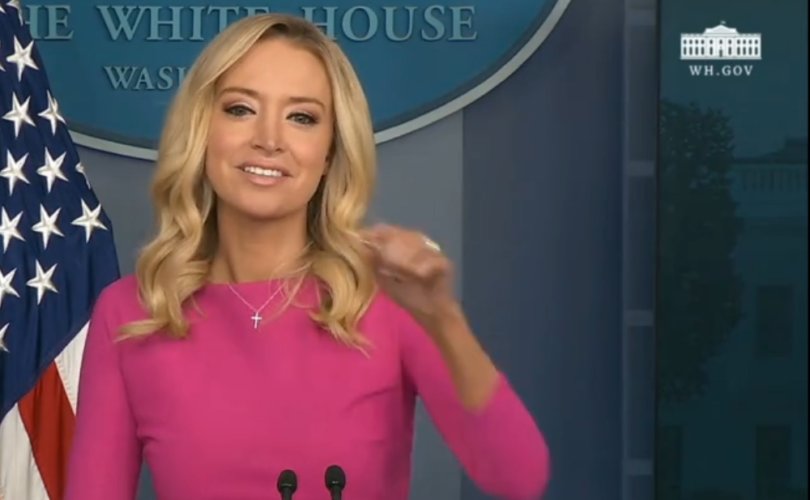 CAMBRIDGE, Massachusetts, January 20, 2021 (LifeSiteNews) — As cancel culture and its attacks upon free speech accelerate, a campaign at Harvard University to “revoke” degrees of certain conservative alumni seeks to elevate this trend to a more serious level.

A petition is being circulated demanding the university rescind the degrees of former White House Press Secretary Kayleigh McEnany; U.S. Sen. Ted Cruz, R-Texas; U.S. Rep. Dan Crenshaw, R-Texas; and several others due to spreading “disinformation” and “mistrust that created” the “insurrection” on January 6.

This trend apparently has been building at the Ivy League college since last fall’s election.

George Washington University law professor and commentator Jonathan Turley reported in November how a group of Harvard students demanded the administration bar “former Trump officials and consultants from entering the campus until they are reviewed and vetted.”

And last week, Rep. Elise Stefanik, R-New York, was removed from the Harvard Institute of Politics Senior Advisory Committee for making “public assertions about voter fraud in November's presidential election” that the dean of the school of politics believes “have no basis in evidence” (sic).

Stefanik was among the 147 Republicans who voted in a joint session of Congress to challenge the election certification of Joe Biden.

Turley charged that the Capitol riot was now being used as a pretense “to accelerate the crackdown on free speech on our campuses.”

“More importantly,” he emphasized, this proposal to revoke degrees “is wrong. It is using academic degrees as a vehicle for political expression and retaliation. Just declaring such figures ‘violent actors’ does not change the fact that the university would be acting in a raw political fashion. It would send the message that any degree is subject to the shifting political winds of a university and that attaining a degree remains only tentative and subject to revocation by majority demand.”

He went on to note that the primary motivation for this campaign was “support for the challenge to the electoral votes in Congress,” which was “made under a federal law and has been repeatedly made by Democratic members without any such campaigns of retaliation or even recriminations” being considered.

“A Harvard degree is a privilege, not a right. Harvard had no qualms about rescinding offers of admission to high school students because of racist activity online that did not reflect the University’s values. But holding teenagers accountable is easy. Harvard should have the will to hold adult insurrectionists to the same standards.”

Accordingly, Turley concluded such a revocation “would result in immediate and likely successful court challenges,” as he could not “imagine a court allowing such an action to occur on this basis.”

These compounding retaliatory efforts started in earnest two weeks ago when Twitter permanently banned President Trump from their platform with Facebook and Instagram following soon after.

Many other conservatives, including British lockdown skeptic Peter Hitchens, have reported that Twitter reduced the number of their followers since Trump was dropped.

However, the damage doesn’t end here. These purges have evidently gone beyond the desire of merely silencing conservatives on social media and have now intensified into explicit desires to harm them in a direct way.

In referencing Rep. Stefanik, for example, the Harvard petitioners wished to inflict a significant amount of harm to her life. In demanding the revocation of her degrees, they said that since she would wear her “ban from Harvard as a badge of honor,” she “may be less sanguine about a career without their B.A or J.D. Revoke their degrees.”

Other Trump supporters such as baseball great Curt Schilling had his personal insurance dropped by AIG due to his “Social Media profile.”

And amid unsubstantiated accusations President Trump incited the riot at the Capitol two weeks ago, he has also been “canceled” by at least three banks, the PGA, and the City of New York, according to the Daily Mail.

There have also been reports of airlines and banks denying services to Trump-supporting Americans, and others are allegedly getting fired from their jobs simply for having been in D.C. on January 6.