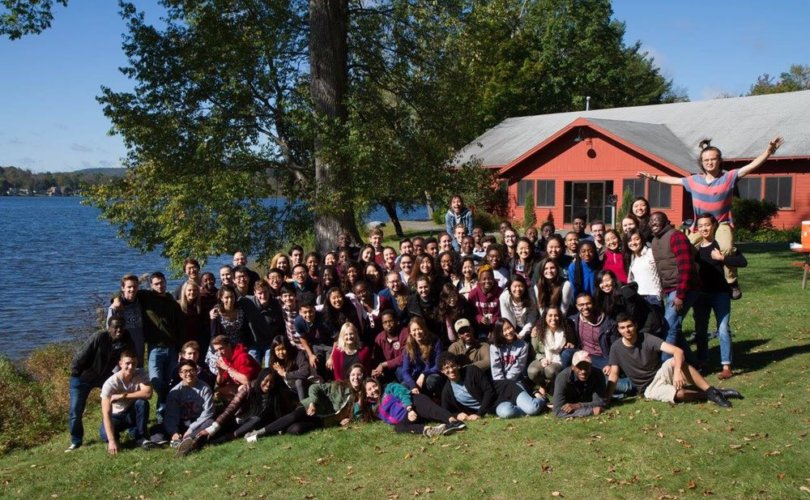 CAMBRIDGE, Massachusetts, March 1, 2018 (LifeSiteNews) — Harvard has suspended a Christian student group for asking a student leader promoting her lesbian relationship to step down.

The school’s Office of Student Life put Harvard College Faith and Action (HCFA) on probation for a year. It is the first time a campus group has been given administrative probation.

“HCFA had conducted itself in a manner grossly inconsistent with the expectations clearly outlined in the Student Organization Resource and Policy Guide,” school spokesman Aaron M. Goldman wrote in an issued statement.

The Harvard Crimson student newspaper reports that the suspension is “almost certainly linked” with a September 2017 incident involving a female student leader who publicized her romance with another woman. The school’s Student Handbook delineates an anti-discrimination policy that includes sexual orientation.

The unnamed woman mentored other members of HCFA as an assistant Bible course leader. One of her communiqués with the students she mentored was about a new love she had found that gave her “inexplicable peace.”

“This person really makes me laugh, makes me feel safe, and can get me to breath(e) again during times of hyperventilating in a really bad panic attack, challenges me to be a better person for myself, others, and God,” she wrote. “This person is a girl.”

The woman continued to write about her girlfriend, saying they prayed “a lot” but felt “extremely at peace” about their union.

Christian leaders met with the woman and after talking about her relationship they asked her to step down from being an assistant Bible course leader.

“In light of [my lesbian partner], I have been asked to step down,” the woman emailed.  “I cannot express how much this saddens me.”

HCFA co-presidents Scott Ely and Molly L. Richmond, both seniors, explained that their organization has clear character standards, including “sexual purity” in abstinence before marriage. They emphasized that these standards apply to student “leaders of all sexual orientations.”

“We reject any notion that we discriminate on the basis of sexual orientation in our fellowship,” Ely and Richmond emailed in HCFA’s defense. “The student in this case was removed because of an irreconcilable theological disagreement pertaining to our character standards.”

“Our theological view is that — for professing Christians who are in leadership — celibacy is the only option outside the bounds of marriage,” the co-presidents said.  “We have applied and do apply this policy regardless of sexual orientation.”

The unnamed woman told The Crimson that she and her girlfriend never had “extramarital sex.” “We’ve been fairly open in our conversations within HCFA about our decision to not have sex until marriage since the beginning of our relationship,” she said.

Under probation, HCFA will lose the right to reserve Harvard rooms where the group met weekly to pray together. They will also be denied the right to put up posters and flyers on campus, and to take part in activity fairs.

Atkins even proposed that HCFA be cut off from all UC funds until they demonstrate “contrition.” The proposal lost by a 5-3 vote of the Finance Committee last week after members questioned whether they had the authority to cut off all UC funding.

For its part, the Undergraduate Council overwhelmingly passed a resolution Sunday denouncing HCFA’s actions and demanding its leaders give a “prompt, public, and unconditional apology” to the unnamed woman and to the entire school. The UC did not give HCFA leaders a chance to speak in their defense at the meeting. The UC resolution also expressed support for students who engage in homosexual activity.

After the yearlong probation, Goldman said HCFA must submit “updated materials demonstrating that they are in compliance with the university’s nondiscrimination” policy in order to be recognized as a student organization again.

School spokeswoman Rachael Dane said HCFA will also have to cut ties with their “parent” group, Christian Union, whose employees asked the unnamed lesbian to resign from leadership.

Christian Union (CU) is a national organization that gives money and leadership support to Ivy League Christian student groups. CU hires HCFA staff. The requirement to break off from its parent group would cripple HCFA.

In a follow-up article, the Crimson quoted numerous students approving of the suspension, but only one who disagreed. Freshman Kent Toshima opined that Harvard “should preserve individual liberty” for HCFA.