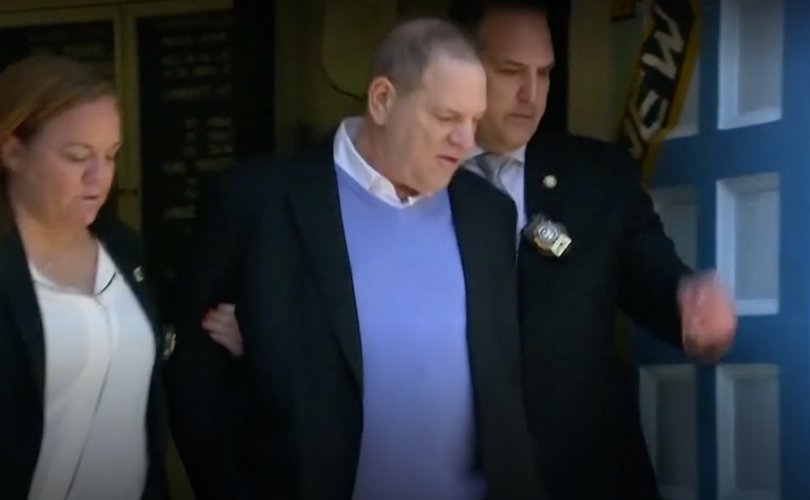 NEW YORK CITY, May 25, 2018 (LifeSiteNews) – Disgraced Hollywood producer and major Democratic donor Harvey Weinstein turned himself in to New York police on sex abuse charges today. He was led out of a police station house in Lower Manhattan wearing handcuffs after turning himself in and being arrested for rape charges.

Last fall, numerous women began accusing Weinstein of various forms of sexual assault and coercion, including rape. Weinstein was arrested on sexual abuse charges. One of the charges stems from Weinstein allegedly forcing actress Lucia Evans to perform oral sex on him in 2004.

“I said, over and over, 'I don't want to do this, stop, don't,'” Evans says of a meeting which she thought was about career opportunities in Hollywood. Weinstein “overpowered” her, and “I just sort of gave up,” she said.

It remains to be seen whether Weinstein will be charged with crimes related to any of his other accusers, or concerning financial fraud allegations also under investigation.

Weinstein has apologized for unspecified actions he attributed to coming from a generation “when all the rules about behavior and workplaces were different,” but has denied the most serious accusations. The scandal cost him his position at the company bearing his name and lead to many prominent Hollywood figures denouncing him, but it soon came out that much of the industry had known the truth for years yet kept it hidden.

The trend of sexual abuse accusers coming out against prominent figures soon spread to Congress and the mainstream media, yet liberals eventually claimed the narrative for themselves under the #MeToo label, presenting the problem as an intrinsic characteristic of American “patriarchy” rather than a failing of specific, left-leaning subcultures.