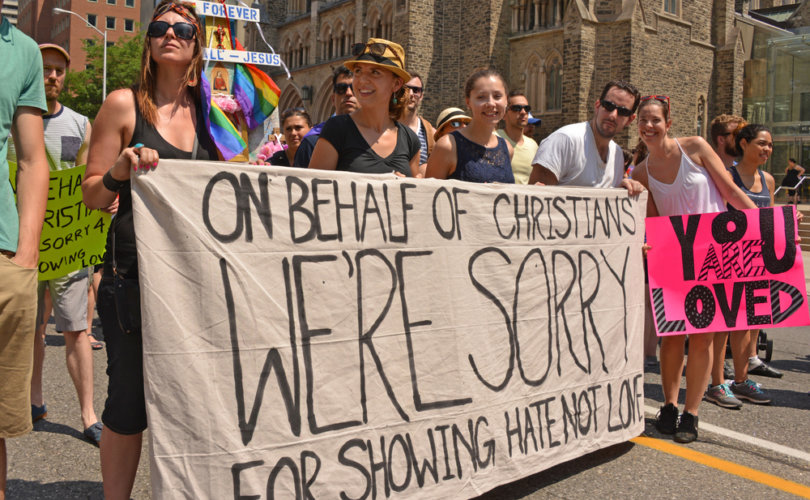 If Christians truly believe that the gay lifestyle puts people further from God, then would it not actually be hate to endorse gay marriage?

July 4, 2016 (LifeSiteNews) – In my third year of university, I had to take a mandatory class on the history of Canada’s indigenous peoples. One of the main topics that came up again and again was the impact of the missionaries who arrived, often alone, to proselytize among the various aboriginal nations. They came, they taught, and many of them died horrific deaths replete with burning, flaying, and dismemberment. My fellow students were not quite sure what to make of this. During one seminar, a young knock-off Noam Chomsky declared that these men were obviously racist, since they apparently viewed the spiritual beliefs of the aboriginals as inferior to their own.

I asked the student in response if he thought the priests had truly believed in the existence of heaven and hell and in the truth of their message. Considering their courage in the face of an almost inevitable grisly end, he was forced to say that yes, they did. If that was the case, I asked him, what would be more racist: Priests deciding that the indigenous peoples of Canada were not worthy enough to merit proselytization, or deciding that these people were human beings of inestimable value, and thus all pains should be taken to reach them? If the missionaries truly believed that the natives would go to hell if they never heard the message of Christianity and yet decided they were not worth the effort, would that not be genuine racism?

The student had nothing to say. He looked a bit stunned.

I share this anecdote because it cuts to the heart of one of the prime difficulties Christians in today’s culture experience when discussing their beliefs with their peers: We no longer speak the same language. We still use the same words, but we mean very different things by them.

The word “hate,” for example, has been redefined to mean disagreement with the political objectives of the Sexual Revolution. Christians are accused of “hating” gay people for disagreeing with gay marriage. But if Christians truly believe that the gay lifestyle puts people further from God, then would it not actually be hate to endorse gay marriage? Because the opponents of Christianity do not take it seriously, they expect Christians to ignore its teachings, as well. Gay activists are demanding that Christians ignore, abandon, or repudiate fundamental Christian teachings—and on top of it all, they are demanding that Christians stop caring about the souls of the gay people they know and love. This silence would in actuality function like hatred.

The same thing applies to words like “courage” and “bravery.” Such words used to conjure up images of brave men and women facing danger and fighting the odds to protect the people they loved. I think of those young men who covered the bodies of their girlfriends and wives during a recent mass shooting in the United States, willing to die so that those they loved might live. Now, however, a man getting a sex change and dressing in drag to the wild applause of everyone he meets, fawning interviews by talk show hosts, and the vocal support of politicians, is called “brave.” President Barack Obama actually called NBA star Jason Collins when Collins announced that he was gay in order to “praise his courage,” as if declaring one’s sexual lifestyle was somehow courageous. It makes one long for the days when George W. Bush visited wounded soldiers to comfort them and to weep with them.

And just as “hate” has been redefined, “love” has been redefined as well. Love once meant wanting what was best for the other. Thus, loving someone would mean telling that person if you thought their lifestyle was harmful, no matter how difficult or painful that conversation might be. Now, our culture seems to think that love means agreeing with someone and supporting their lifestyle regardless of what you believe. Love is now only a feeling, not an action rooted in belief.

As the euthanasia debate gears up here in Canada, I’ve been thinking a lot about this confusion and difficulty in communication. Euthanasia, after all, literally means “good death.” The use of the word by the euthanasia lobby involves an assumption about what a good death actually is. For Christians, a death can only be called “good” when the person departing is right with God. To choose self-destruction as one’s final act is, in fact, the very antithesis of a good death.

This crossed my mind again this week as I was rereading Eric Metaxas’ wonderful biography of the abolitionist William Wilberforce, Amazing Grace. Wilberforce, along with his friends John Newton, Granville Sharp, Thomas Clarkson, and scores of others, strove with all his might to love his neighbour as God had commanded him to. He started countless organizations to help the poor, the vulnerable, and the downtrodden. He fought unbelievable odds to end the Slave Trade, often suffering horrible nightmares in which he vividly saw the sufferings of the enslaved Africans. And just a few days before his death in 1833, he received the news that one of his dearest wishes had come to pass: Great Britain had abolished slavery itself. A life lived with blazing love for all those around him, a life lived in relentless service to his Maker. A life that literally changed the world for the better. A good life, ending with a good death.

As I read the description of Wilberforce’s last breaths and his entry into the next life, the final lines of John Bunyan’s Pilgrim’s Progress, in which he describes Mr. Valiant-for-truth crossing the river of death, arose in my mind: “So he passed over, and all the trumpets sounded for him on the other side.”