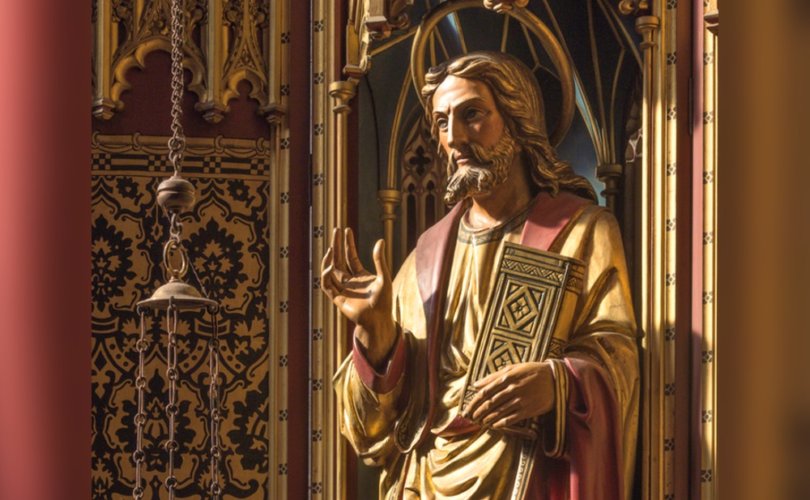 The carved statue of Jesus the Teacher in church St. Barnabas, London, UK.Shutterstock.com

March 16, 2018 (LifeSiteNews) – A new policy of a close adviser of Pope Francis that offers Catholic teaching positions to those who are living in invalid and adulterous second “marriages” is contrary to the Church’s Code of Canon Law, says Edward Peters, an eminent canon lawyer licensed by the highest tribunal of the Church.

“It is nonsense to hold, as it seems an influential diocesan bishop just a few clicks from the shadows of St. Peter’s holds, that divorced-and-remarried Catholics, though ineligible for holy Communion, might nevertheless be ‘outstanding in … the witness of Christian life’ (c. 804) such that they could be ‘ideal for the teaching of the Catholic religion,’” writes Peters in a recent entry on his blog, “In the Light of the Law.”

Peters links to a March 13 LifeSite article about Marcello Semeraro, who is the bishop of the Italian diocese of Albano, and who has indicated his desire to give Catholic teaching positions in some cases to those who are living in invalid second marriages.  Semerano, who is a close adviser to Pope Francis, has also said that he wants to make such adulterous couples eligible to be lectors at Mass.

“The inescapable contradiction between the canonical expectations in such cases and the public status of some persons might explain, albeit ironically, why many are so feverishly working to undermine the plain meaning of Canon 915 and now, I guess, Canon 804,” adds Peters.

Canon 915 of the Catholic Church’s Code of Canon Law prohibits priests from giving Communion to those who live in habitual states of mortal sin, and canon 804 requires that Catholic religion teachers be “outstanding in correct doctrine, the witness of a Christian life, and teaching skill.”

Peters notes that the ecclesiastical discipline of the Church has been built up “canon-by-canon” over many centuries, but “Lately that approach, ‘canon-by-canon’, seems to be a good way to dismantle Church order.”

As Peters has mentioned in previous blog postings, many interpretations of Pope Francis’ apostolic exhortation Amoris laetitia, which read it as permitting habitual adulterers to receive Holy Communion, run directly against the Code of Canon Law, particularly canon 915, which has not been altered. Now, other canons are being “assailed,” along with their “ecclesiastical values,” writes Peters.

“Divorced-and-remarried Catholics are not prohibited from joining in many parish activities,” notes Peters, giving examples such as “prayer groups, service organizations, and fellowship activities,” Peters writes. However, “some roles, especially institutional and liturgical leadership roles, are, I suggest, prohibited to certain members of the faithful based on their public actions.”

Peters is a professor of canon law at Detroit’s Sacred Heart Major Seminary and an advisor to the Vatican’s Supreme Tribunal of the Apostolic Signatura. His posts about issues related to the Catholic Church’s law are widely cited in the media.