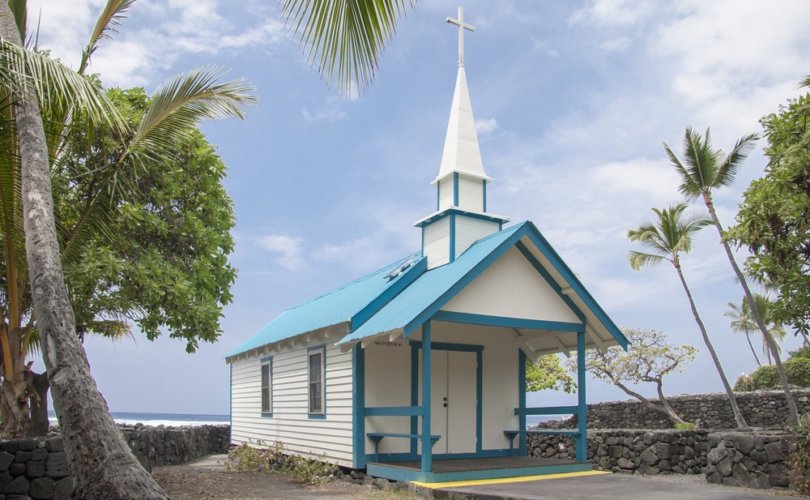 January 18, 2018 (LifeSiteNews) – The ballistic missile alert last weekend that had countless people in Hawaii panicked for roughly one half-hour with the thought that death was imminent did something the Catholic Church, on the whole, has struggled to do of late – it got people into Mass and Confession.

Reports of soul searching, prayer, and a return to the Sacrament of Penance surfaced after the missile scare.

“BALLISTIC MISSILE THREAT INBOUND TO HAWAII. SEEK IMMEDIATE SHELTER. THIS IS NOT A DRILL,” was the alert sent throughout the Pacific island state on Saturday morning, January 13. Residents and visitors got the message at 8:07 a.m. local time via TV, radio, and cellphones.

Until a second message 38 minutes later described the first as a “false alarm,” residents of Hawaii were under the assumption a missile was en route – a rational supposition, given the islands are said to be within range of some of North Korea’s Intercontinental Ballistic Missiles (ICBMs) and also the current climate between the U.S. and North Korea.

One Catholic family turned immediately to the rosary and the Blessed Mother for protection, and there were reports that as the dust began to settle from the panic, there were full pews for Sunday Mass the following day and long lines for Confession.

The Catholic parish attended by Dallas and Monica Carter and their five children in the Diocese of Honolulu was packed, a Catholic News Agency report said.

And aside from a full church that Sunday morning, the line for Confession was out the door, Dallas Carter said, with their friends from other parishes throughout the island reporting the same.

It’s something Carter has nicknamed #MissileConversions.

His family got in line for Confession in gratitude for being able to receive the sacrament again.

Carter said one of his first reactions to the missile alert was, “Oh (no) I haven’t gone to Confession yet!”

His next thoughts were about making an act of contrition for his sins followed by getting his kids to pray the rosary.

After checking on his neighbors, Carter found his wife had put the family’s Our Lady of Guadalupe statue in the center of their breakfast table, and all of the kids were praying the rosary.

Carter, a theology lecturer for the Diocese of Honolulu, had also been thinking of taking refuge with his family in his concrete classroom.

His wife had a slightly different focus.

“My wife did probably the more important thing and she prayed,” he said.

Their oldest child, Mariah, 11, had been woken up by her nine-year-old brother running into her room to alert her of the missile alert.

“I concentrated so hard on the rosary,” she added. “I was like ‘come on Mary I know you can do this.’”

On the island of Oahu pro-life advocate Jason Jones was racing during the missile alert to get his wife and five of their seven kids to the closest prospect for safety, Makua Cave, behind the Waianae mountain range.

As he rushed to put as much distance as he could between most of his family and what he assumed would be the center of the incoming missile’s target — Pearl Harbor — Jones thought of his oldest daughter and his mother-in-law, both living in Waikiki, and how he could do little to help them beyond trying to get them on the phone.

During the panic, he processed the thought that it might be the last time he spoke to them.

He recounted in a post at the Stream an exchange with his nine-year-old son on the way home after word was released of the false alarm. The boy had asked why the U.S. doesn’t bomb North Korea so “we don’t have to worry about this anymore.”

Jones walked him through how there are children and fathers in North Korea whose lives are precious as well, explaining, “It is better to suffer injustice than to inflict it.”

“A year ago this week I was in eyeshot of ISIS as I traveled with Yazidi and Kurdish soldiers who fought to defend their families,” Jones wrote. “Those families often fled for safety to … caves. And today, I had walked in their shoes.”

Jones shared a photo of him and his family in Makua Cave after the all clear was given, smiling in relief.

Dallas Carter said his nine-year-old son had kept asking during the missile scare if they were going to die, and he was at a loss for how to answer his son.

“That’s the first time in our lives that my kid asked me that,” Carter said in the CNA report, “and I didn’t know what to say.” The couple tried to comfort their son by telling him it was an adventure that the whole family was on together.

The Carters’ parish held a beach barbeque after Mass on Sunday, and Dallas Carter said the togetherness with friends a family “was just the right amount of post-missile scare therapy.”

He’ll plan to keep his hand-held radio nearby in case something similar happens again, also joking that he learned to, “Have the whiskey more readily available.”

“I’d have the rosary in one hand and my favorite whiskey in the other,” said Carter.

In terms of the spiritual, Carter reported another lesson learned from the missile scare.

“Don’t play around with grace,” he stated. “Be in the state of grace, be prepared.”

“And it doesn’t mean to get on your knees and don’t take shelter,” Carter added, “but have the spiritual part ready.”

“Don’t forget to recourse to the greatest resource we have in situations like that, which is prayer,” he said, “especially to the Blessed Mother who isn’t going to let her children suffer and go through something that isn’t the will of God.”