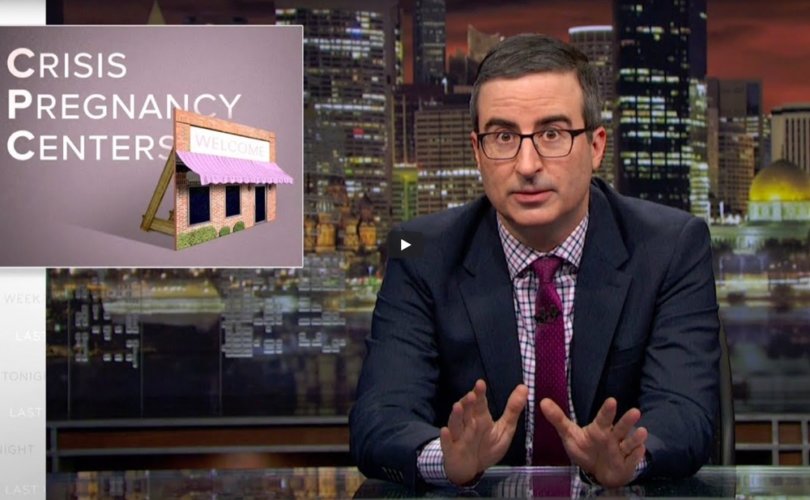 “The tactics that CPCs often use are disingenuous and predatory, and it is absolutely critical that people understand that” he said.

He began by accusing CPCs of hiding their objective of discouraging abortions by using the word “choice” in their names and advertising “pregnancy options.” He quoted pro-life activist Abby Johnson’s advice that clients are more receptive to clinics that “appear neutral on the outside.” CPCs offer assistance with choosing either parenthood or adoption, but Oliver maintained the language was misleading if abortion is not among those options.

In a Facebook post published Monday, Johnson, a former Planned Parenthood employee, slammed the hit piece as 'full of lies and misrepresentations.'​ She responded to claims made in the segment. “There is a group of women who would never think to darken the door of a pregnancy center” thanks in large part to “the false statement they have read in media publications,” she said, so “aside from lying and manipulation, we will do whatever it takes to get that woman in the door, because the life of her child is depending on it.”

He next accused pregnancy centers of “intercept[ing] people’s internet searches” by buying Google ads for keywords related to pregnancy and abortion, and trying to “physically intercept” women by placing their locations close to abortion facilities. When the pro-abortion group NARAL originated this charge in 2014, an investigation by Jill Stanek determined that the juxtaposition of pregnancy center ads with “abortion clinic” searches was a result of Google’s AdWords’ real-time bidding algorithms, not conscious decisions by CPCs.

Oliver spent the bulk of the segment arguing that CPCs routinely deceive women in a variety of ways, starting with “nonsense information” such as that “35 percent of suicidal behaviors…may be attributable to abortion,” abortion “almost doubles” risk of breast cancer, and that “condoms are ineffective in preventing pregnancy.”

However, the suicide statistic comes from a 2011 study published in the British Journal of Psychiatry; the breast cancer statistic (which refers to abortions performed before age 18 or after age 30) comes from the National Cancer Institute; and the US Centers for Disease Control reports an 18% failure rate for the “first year of typical use” of male condoms.

A 2016 study out of the University of Notre Dame found a link between school condom programs and a 10% increase in teen birth rates, which dovetails with the pro-life argument that encouraging condom use ultimately encourages sexual promiscuity, as well. Nevertheless, Oliver chided CPCs for not dispensing birth control.

Pro-lifers should be “filling Pez dispensers with birth control pills,” “giving condoms out to trick-or-treaters,” and giving “IUD earrings out as hostess gifts” if they really oppose abortion, he said. He claimed pro-lifers don’t because their real goal is “controlling women’s sexual behavior” rather than saving lives.

But Mary Eberstadt, Senior Research Fellow at the Faith & Reason Institute, has pointed out that historically, an “increased use of contraception has also increased abortion.”

“Fifty years ago, many people of good will defended contraception precisely because they thought it would render abortion obsolete.  But the statistical record since the 1960s shows this commonly held logic to be wrong,” she said.

Oliver also claims that “abortion is far less medically dangerous than carrying a child to term” (a claim disputed by multiple researchers), which he contrasts with video of a supposed CPC worker claiming that “if people die due to an abortion, later on a lot of times they’re finding parts of the fetus in, like, the lungs or the heart.” The center is not identified, but rare cases of abortionists leaving baby parts inside of a woman have been reported.

He then played video of New York OB/GYN and abortion advocate Dr. Anne Davis recounting a case in which a patient in her third trimester came to her seeking an abortion after a CPC allegedly told her “she didn’t have to rush […] because they do abortion in New York City up until term,” only to discover she would have to give birth. Davis has recounted similar anecdotes elsewhere, but does not identify the alleged CPC.

Oliver conceded that “some” pregnancy centers offer women assistance such as “parenting classes and free diapers.” But he then attacked that support by quoting Abby Johnson’s advice that pregnancy centers should cut off such assistance at six months after birth, to encourage self-sufficiency in new mothers, and because CPCs lacked the resources to provide care indefinitely.

“To which I would say, yeah! Exactly!” Oliver responded, drawing a parallel to women who “need” abortions for similar economic reasons.

In her Facebook post, Johnson responded that “pregnancy centers will never be able to effectively compete with the abortion industry,” so “we want to provide services that they would NEVER consider providing: material assistance for Mom and baby, professional counseling, true options counseling, grief counseling from past abortions, lactation support, parenting and childbirth classes, fertility care instruction, and so much more.”

Katie Yoder of Newsbusters adds that the national pregnancy center network Care Net has “provided over $112 million in free services in the last two years to people in need of support in making pregnancy and family decisions.”

Oliver’s final point was that it is “way too easy for a religious organization to disguise its true nature, establish a CPC, and provide women with dangerously poor information about one of their most important health choices.” To “prove” this, he closed the segment by revealing that he had easily registered a mobile pregnancy center called “Vanned Parenthood” in the state of New York.

Inside the van was comedian Rachel Dratch, portraying a caricature of a religious CPC worker named “Wanda Jo Oliver.” Dratch recited a series of outlandish claims about abortion: that it “make[s] a ghost baby that’ll haunt their hoo-ha forever,” “turns your breast milk into kombucha,” and that afterward “your vagina seals shut like an Egyptian tomb.”

Oliver claimed it was “all perfectly legal” for CPCs to actually tell women similar things, because they are not required to be licensed as medical professionals. But Johnson noted that the same could be said of many Planned Parenthood locations.

“The media is so dishonest, it’s not surprising that they won’t even mention these FACTS in their pieces,” Johnson concluded. “Either way, we must keep sharing truth.”