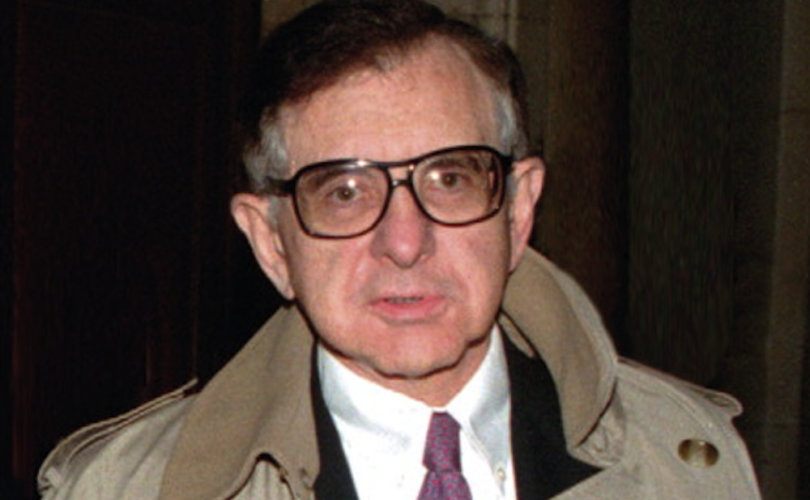 The late Bernard Nathanson inspired the creation of the Hosea Foundation to reveal the tactics of abortionists.

February 10 2017 (LifeSiteNews) – Many pro-lifers are familiar with the conversion story of former abortionist and NARAL founder Dr. Bernard Nathanson, but fewer know the full story of how he convinced Americans to embrace abortion.

One woman is on a mission to change that because of a promise she made to Nathanson when he was dying of cancer.

That woman is Terry Beatley, the founder and president of the Hosea Initiative. She got her start in pro-life ministry doing outreach to minority communities, educating them about Planned Parenthood founder Margaret Sanger’s racist, pro-eugenics agenda.

In 2009, “I was just being obedient to the Lord” when the idea to meet with Nathanson came to her, Beatley told LifeSiteNews. She was at a 24-hour-prayer vigil at her church when she asked God what He wanted her “to do with these experiences and this head full of information.”

“All I could hear back was, ‘go and interview Dr. Bernard Nathanson,’” she said. “Within about two weeks, I was on a plane [on] December 1, 2009, and it literally changed my life forever.”

Nathanson, one of the founders of the powerful abortion lobby group NARAL Pro-Choice America, committed more than 60,000 abortions. He gradually began to realize that abortion kills a whole, distinct, living human being and eventually became one of the strongest voices in the pro-life movement.

When Beatley met with Nathanson, “it was just a very heavy interview,” she said. He told Beatley to “teach the strategy” of how he deceived our country about abortion. Then he told her, “tell America that the co-founder of NARAL Pro-Choice America says to love one another. Abortion’s not love; stop the killing. The world needs more love, and I’m all about love now.”

“The only time” Beatley saw a “glimmer of hope” in Nathanson’s eyes was when she promised him, “America’s going to know your story, how you deceived our country.”

Out of this promise the Hosea Initiative was born. Its mission is to bring healing truth to a broken world by teaching the eight-point marketing strategy Nathanson used – and later regretted – to convince people to support abortion.

Through speaking engagements, pro-life activism, and her new book, What if We’ve Been Wrong? Keeping my Promise to America’s “Abortion King,” Beatley is sharing Nathanson’s full story.

“Dr. Nathanson knew that in order to push this pro-abortion campaign forward back in 1969, they needed to frame the debate around ‘choice,’” said Beatley. “They weren’t framing it around ‘murder’ or ‘terminating a pregnancy,’ it was just simply around ‘choice.’”

“In order to overturn the anti-abortion law in New York in 1970, Dr. Nathanson had to make sure that enough Catholics would support pro-abortion candidates,” she explained. “They knew that they already had about 50 percent of the Catholics in their back pocket, because they were already contracepting. … They had kind of bought the lies of Margaret Sanger. But they needed to ensure that the other group of Catholics – that enough of them would not shift their votes over to pro-life candidates.”

“So they developed what’s called the ‘Catholic Strategy’” to win over Catholics to vote for abortion supporters, said Beatley. Interestingly, she said, “we saw the Catholic Strategy being executed by Tim Kaine during the last political election.”

“We go into church groups, women’s groups, men’s groups, really any kind of setting [and] we teach,” said Beatley. “We teach the 100-year history of how Malthusian philosophy of population control management became the social policy of the West. And a big chunk of that, of course, is Dr. Nathanson, but then the root of it is Margaret Sanger and Malthusian philosophy.”

The Hosea Initiative was given unexpected but miraculous, exposure at the 2017 March for Life. Beatley credits the Blessed Virgin Mary for this. The Basilica of the National Shrine of the Immaculate Conception invited her to do three book signings over the March for Life weekend.

“The book is dedicated to Our Blessed Mother, and as a revert who’s totally embraced Our Mother,” doing the major book signings at America’s largest Catholic Church – one of the March for Life’s main activity hubs – was very special to Beatley.

She was able to share Nathanson’s strategy with thousands of pro-life pilgrims at the Basilica, and then a group of marchers carried giant blown-up signs of the cover of the book, giving it further exposure.

Sam Casey of the Jubliee Campaign read aloud from What if We’ve Been Wrong? to hundreds of pro-life leaders and activists at an anti-Planned Parenthood rally. The portion he read was Nathanson’s never-seen-before resignation letter to NARAL's Board of Directors. His widow shared it with Beatley for the book.

The Hosea Initiative, in partnership with Nathanson’s family, has the movie rights for his story. Beatley is now working to establish Hosea Initiative affiliates in all 50 states.

The group is developing a curriculum for middle and high school students at “inner city schools, churches,” and Catholic private schools, Beatley said.