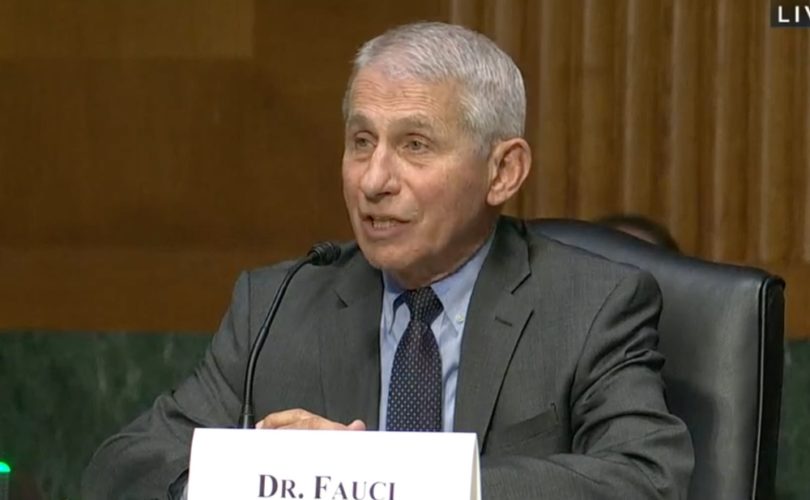 WASHINGTON, D.C., July 21, 2021 (LifeSiteNews) — After an explosive exchange in which Sen. Rand Paul (R-KY) grilled White House COVID czar Dr. Anthony Fauci about his department’s alleged funding of dangerous gain-of-function research in Wuhan, China, the Kentucky senator announced he is making a criminal referral to the Department of Justice against Fauci, who he said “lied to Congress.”

Sen. Paul made the announcement on Fox News, telling talk show host Sean Hannity Tuesday night, “I will be sending a letter to the Department of Justice asking for a criminal referral because he has lied to Congress.”

Rand Paul says he will be sending a criminal referral letter to the DOJ about Fauci pic.twitter.com/B17FZCAVoW

The news comes after a contentious back-and-forth between Paul and Fauci during a congressional hearing Tuesday which went viral.

During the heated hearing Sen. Paul, an ophthalmologist who graduated from Duke University’s School of Medicine, contended that Fauci was obfuscating a clear record connecting funding from the U.S. National Institutes of Health (NIH) with gain-of-function research on bat coronaviruses undertaken at the Wuhan Institute of Virology in China.

Amid the intense line of questioning Fauci appeared visibly frazzled, while Paul was seen to casually take a sip of water after Fauci claimed that “If anyone is lying, it is you.”

Sen. Paul began his questioning by reminding Fauci that “Section 1.0.0.1 of the US Criminal Code creates a felony and a five-year penalty for lying to Congress.”

Paul cited Dr. Richard Ebright, a molecular biologist from Rutgers University, who according to Paul said “‘the Wuhan lab used NIH funding to construct novel chimeric SARS related to coronaviruses able to infect human cells and laboratory animals. This is high risk research that creates new potential pandemic pathogens… that exist only in the lab, not in nature.’”

The Kentucky senator asked that a Wuhan virology paper entitled “Discovery of a Rich Gene Pool of Bat SARS Related Coronaviruses” be delivered to Dr. Fauci.

The paper credits the NIH for helping fund its research, which Sen. Paul said “combined genetic information from different coronaviruses that infect animals, but not humans, to create novel artificial viruses able to infect human cells.”

Sen. Paul alleged that the research “fits the definition… that the NIH said was subject to the pause in 2014 to 2017, a pause in funding on gain of function.”

“Dr. Fauci,” Paul continued, “knowing that it is a crime to lie to Congress, do you wish to retract your statement of May 11th, where you claimed that the NIH never funded gain of function research in Wuhan?”

“I have never lied before the Congress, and I do not retract that statement,” Fauci said. “This paper that you were referring to was judged by qualified staff up and down the chain as not being gain of function. What was -”

“You take an animal virus and you increase its transmissibility to humans,” Sen. Paul interrupted. “You’re saying that’s not gain of function?”

Fauci replied that the research was not “gain-of-function” and told Sen. Paul “you do not know what you are talking about.”

Interrupting Fauci again, Sen. Paul said that by the NIH’s own definition, “scientific research that increases the transmissibility among mammals is ‘gain of function.’”

“They took animal viruses that only occur in animals, and they increased their transmissibility to humans,” Paul said. “How you can say that is not gain of function –”

“It is not,” Fauci interrupted.

“It’s a dance,” said Paul, “and you’re dancing around this because you’re trying to obscure responsibility for 4 million people dying around the world from a pandemic.”

“Well, now you’re getting into something,” Fauci responded, claiming that the senator was suggesting that through its grant awarded from EcoHealth Alliance to the Wuhan Institute of Virology (WIV), the NIH was responsible for creating SARS-CoV-2.

Fauci then accused Paul of lying, saying “I totally resent the lie that you are now propagating, senator, because if you look at the viruses that were used in the experiments that were given in the annual reports that were published in the literature, it is molecularly impossible…”

“No one is saying that those viruses caused the pandemic,” Paul came back. “What we’re alleging is the gain of function research was going on in that lab and NIH funded it. You can’t get away from it. It meets your definition and you are obfuscating the truth.”

Sen. Paul’s allotted time expired, and Fauci was given the last word. Pointing his finger at Sen. Paul, Fauci, who appeared to be physically shaking, said “If anyone is lying it is you.”

He’s been outed. Dr Fauci has no credibility. He’s imploded. And he has made the situation worse. pic.twitter.com/nrE9pldEfm

Sen. Paul’s allegations against Fauci in the tense questioning received the support of congressman Jim Jordan (R-OH), who had slammed Fauci’s draconian COVID-19 guidance in April, asking the public health official “when do Americans get their freedom back?”

Washington Post reporter Josh Rogin also appeared to side with Paul, saying “Hey guys, @RandPaul was right and Fauci was wrong. The NIH was funding gain of function research in Wuhan but NIH pretended it didn't meet their “gain of function” definition to avoid their own oversight mechanism. SorryNotSorry if that doesn't fit your favorite narrative.”

Hey guys, @RandPaul was right and Fauci was wrong. The NIH was funding gain of function research in Wuhan but NIH pretended it didn't meet their “gain of function” definition to avoid their own oversight mechanism. SorryNotSorry if that doesn't fit your favorite narrative.

Rand Paul is a national treasure.

Everyone is TIRED OF THE LIES.pic.twitter.com/RmIIPxsrLg

In an interview with podcast host Brad Polumbo July 21, Sen. Paul said he believes Fauci is “okay with lying because he thinks the lie is for the betterment of mankind.

According to Paul, Fauci’s attitude is “predictable as an elitist.”

The senator added that “people on the Left believe they know better than you and they think that the common man’s too stupid to make their own decisions, so these decisions need to be made by their betters. And I truly think that he believes that he knows better.”